I’m new to ruby. I tried to install GEM on my PC by following the steps given in the site http://rubygems.org/pages/download .

I downloaded the package from the mention site and changed the directory to the directory in which the setup resides and tried to run setup using the command,

What should I do now? Let me know, if I do something wrong..

I recommend you just use rubyinstaller

It is recommended by the official Ruby page – see https://www.ruby-lang.org/en/downloads/

We have several tools on each major platform to install Ruby:

To setup you Ruby development environment on Windows:

For Ruby 2.4 or later, run the extra installation at the end to install the DevelopmentKit. If you forgot to do that, run ridk install in your windows console to install it.

Make sure that you check “Add ruby … to your PATH”. 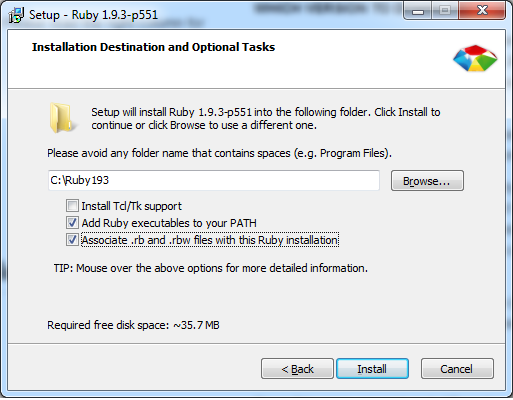 install Development Kit in rubyinstaller.
Make new folder such as C:\RubyDevKit and unzip.

Go to the devkit directory and type ruby dk.rb init to generate config.yml.

If you installed devkit for 1.9.3, I expect that the config.yml will be written as C:\Ruby193.

If not, please correct path to your ruby folders.

After reviewing the config.yml, you can finally type ruby dk.rb install.

Another way is to let chocolatey manage your ruby package (and any other package), that way you won’t have to put ruby in your path manually:

then all you need to do is type

In your command prompt and the package installs.

Using a package manager provides overall more control, I’d recommend this for every package that can be installed via chocolatey.

Use chocolatey in PowerShell

Error installing rubyMine, no SDK specified, but it is listed

Questions: Getting “Could not install gems:no SDK specified” when trying to run any command such as starting the rails server. Why am I getting this and how can I get around it? I’ve...

Count instances of a value in an array in Ruby 1.8.6