I am banging my head against the wall here trying to figure out why IntelliJ/Android is reporting “Empty test suite”. I have a small project with two IntelliJ Modules (“Projects” in Eclipse). The Unit test module has its own AndroidManifest.xml, which I have pasted at the bottom. I am trying to run an ActivityUnitTestCase, since the tests will be dependent upon the Context-object.

Why is not the test runner detecting the testBlah()-method as a test?

And here is my test class:;

I have read the testing fundamentals, the activity testing document, and tried following this Hello world test blog, even though it is for Eclipse. I cannot get the test runner to find and run my test. What am I doing wrong?

Some of the questions I still feel unsure about are:

But the main question of this post is why does not the test runner detect my test?

You need to provide default constructor for your test class, for example:

about your other questions:

If this is happening “all of a sudden” or “it was working 5 minutes ago” my solution was to go into Run/Debug configurations and remove any configurations under “Android Tests”. Sometimes these configurations get corrupted if I refactor the class under test (for example by moving to an new package). 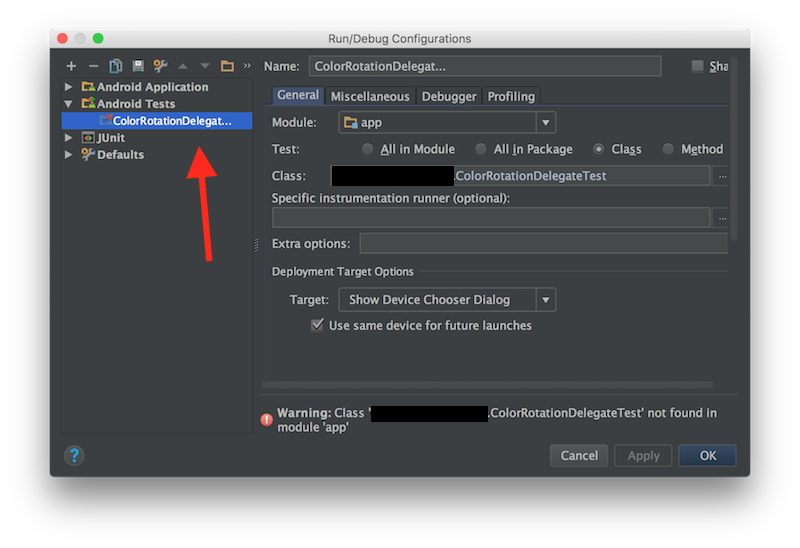 None of the above fixed it for me. What helped was following the instructions:

I had a similar issue. Not sure why this is occurring but I was able to fix it by going to: “File” > “Invalidate Caches/Restart” in Android Studio.

I don’t know if it helps for Android Studio, but I had some kind of Intellij-Gradle conflict.
Solved it by “right-clicking” on the test-file and hit “compile file …Test.java”. After that I could run single tests again.

I had the same issue on Android Studio 2.3.1, turns out it was just a bug with AS. Running the same test on version 2.2.1 performs fine.

If you’re only running Android Studio on the Cannary channel, I recommend you also install a stable version as well. http://tools.android.com/tips/using-multiple-android-studio-versions

I had tests that were running fine until gradle and android studio got upgraded.

Apart from adding a default constructor to your tests, you might need to do some of these things to get your test suite to work

Under src/ create androidTest/java/<your-package-name>/test . Note the androidTest. Anything else including instrumentTest will not work.

Add this to build.gradle

Add this to the AndroidManifest.xml

For Intellij 15 I resolved this issue by:

Obviously, you need a target device as to run your tests as they are instrumented tests. For some reasons, Android studio sometimes does not ask you to point to this target device and just prompt the “Empty Test Suite” message.
There are different ways to fix this, here are a few :

In my case, none of the previous answers worked. The solution was to simply move the test class to another package.

This happened under androidTest/

In my case that problem was caused due to mistake in my code, actually that was in application class, so target activity wasn’t opened and test output prints

I have tried run tests directly from terminal with adb shell am instrument -w -r -e package your.package -e debug false android.support.test.runner.AndroidJUnitRunner. With this it prints for you much more about exception.

I had this problem because I had this in my build.gradle:

Even though I wasn’t using the Android Test Orchestrator (must have copyied from the tutorials by mistake).

Commenting that out solved it for me.

None of the other solutions worked for me, but I was able to get this working simply by uninstalling the existing app or test suite, then running the tests.

In my case, the project I was working on had a couple of modules. None of the solutions I found for this error helped me, and then somehow I realized that if I added the testing dependencies in BOTH of the build.gradle files, the tests magically started working. It doesn’t matter if your tests live in only 1 of the modules, both gradle files must include the dependencies and the testInstrumentationRunner value.

So, if like me, none of the other answers have helped you, try adding these lines to the build.gradle file of each of your modules:

and then also add:

I just renamed the file and the problem fixed.

I had the same issue, and the reason was my test class did not have Test at the end of the class name!

My issue was caused by an exception being thrown in the @BeforeClass method of my test case. It some how wasn’t causing the test to fail – I only found it by inspecting the logcat output.

I fixed the exception and suddenly my tests were running!

After facing the problem today – not being able to run the instrumented android tests with Empty suite error – I found a git issue about this problem and thanks to Stephan Linzner, I could run the tests.

tl;dr You have to right click the test package and not the class in order to make the tests run.

Basically I had to create a package – instrumentTest/java – under my src directory, and put all the tests there. Then I could execute these tests individually.

I had a raw Java project where this was occurring. Simply Java + JUnit4. It definitely resides with something in your .idea/ or .iml files. I scrapped mine, re-imported, and finally the tests ran again.

The test class may excluded from the compilation. Fix it in setting-compiler-exclude.

Here are my debugging steps I go through when Android Studio all of a sudden decides to stop running / debugging tests (And boy does this happen embarassingly often!!):

I will add more fixes as I run into them!

I did nothing and the problem went away after half a day of pain, I opened and closed the projects many times, ran each class tests manually, maybe that fixed my it.

In Android studio with spock framework I’ve changed my gradle’s version from 2.2.2 to 3.2.1 and all goes well.

The accepted answer didn’t solve my problem. So I decided to copy ExampleInstrumentedTest which is created by default in Android Studio and runs without any problems, renamed it during the copy process (no Refactor->Rename after copying!) and pasted the contents of my unit test into it. After that the error disappeared.

I experienced the “Empty test suite” error when trying to run local unit tests in my Android Studio 3.0 project.

After reading the Android Developer documentation, I quickly realised that the issue was caused by my gradle config which included the following lines.

The AndroidJUnitRunner class is a JUnit test runner that lets you run JUnit 3- or JUnit 4-style test classes on Android devices.

Since my tests were local and therefore not required to run on any device, removing the above com.android.support.test… entries enabled me to execute the unit tests.

I was doing some insertions in a db in the @BeforeClass method.
I realised I had an object/database mapping problem. This data mapping problem was the cause of this issue for me.

In my case, I had my instrumented tests in androidTest/java/<package.name>/MyTestingClass, but I had set my current build variant to “preproduction”. And there’s the point! As specified in Android Studio documentation:

By default, all tests run against the debug build type.

The message Class not found. Empty test suite. kept appearing until I did this:

Then I executed the tests again and this time they run just perfect!!!

I had this happen to me when I mistakenly marked a non mock class variable with the annotation @Mock
Removed the annotation and the tests ran successfully.
This happened with Junit 4.5 on Android Studio

Not a solution but a workaround that will get you back on track quickly:

The test should now work.

We spent about two hours trying to find the cause but to no avail.