The .classpath file was modified. The update in added a line :

Before the SDK tools update, all my projects worked well !!

I corrected my problem in this way :

But I don’t understand why! Would anybody have an explanation ?

I fixed it by going into Java Build Path > Order and Export tab.

Then “Project -> Clean”. That fixed my issue.

Just over 1.5 days on this issue, solved my problem by reading Google+.

Had the same issue as StylezSoft. To clarify even further, below is my Java Build Path from Eclipse after that I solved the issue (by ticking the android-support-v4.jar library) 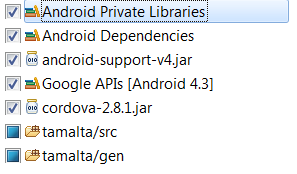 Then I cleaned the Project (Project > Clean… > OK) and everything worked fine.

I had a similar issue after the upgrade. The problem in my case was that the android-support-v4.jar library had become unchecked in the Order and Export- list. Check + rebuild solved it for me.

The error manifested itself by crashing the app when opening a dialog with a Facebook LoginButton widget on it.

Also need to make sure the Android Dependencies is checked in the Order & Export tab. Both are needed when using other library projects.

I had similar issue, following two steps fixed it:-

I solve this with Android Tools->Add support Library

Previous article
GridView inside Expandable list in android
Next article
vba – How do I write a macro to open an excel file and paste data into the file containing the macro?