I am currently trying to compile and test a small Android Application.

I do not use any GoogleAPI functions, nor do I use functions that are not available in API Level 8. Or at least I do not get any compile errors or warnings in that regard.

When I compile the project and run it on a real device running Android 2.2.1 the Application runs fine. However when I try to run the application on an emulator (Android Virtual Device) with Android 4.2, Api Level 17 I get the following error:

Logcat however is empty. I have really no clue, what this error even means…

You might have installed from a separate copy of the code where the version number was higher than the copy you’re working with right now. In either case, either:

You can also consider adding -d flag to adb install. It should ignore this error.

First uninstall your application from the emulator:

Then try to install the application again.

This was happening in my project because I was using an XML resource to set the version code.

This wasn’t a problem in prior versions of adb, however, as of platform-tools r16 this is no longer being resolved to the proper integer. You can either force the re-install using adb -r or avoid the issue entirely by using a literal in the manifest:

This can happen when trying to install a debug/unsigned APK on top of a signed release APK from the Play store.

The solution to this is to uninstall and then reinstall or re run it from the IDE.

All Android apps have a package name. The package name uniquely identifies the app on the device. If same packageName as app that’s already installed on the device then this error Showing .

In Marshmallow, I got this error,

Looking for solution I searched and came here.
I deleted the app but still have this problem in Nexus 6. Later found that in,

According to sdk src code from …\android-22\android\content\pm\PackageManager.java

if the new package has an older version code than the currently installed package.

I was having same problem. I was getting error when i tried to run in my android device not emulator.

I am able to fix this by running

you can try this:
adb install -r -d -f your_Apk_path

this happened to me when I imported an Android Studio App into eclipse.

I figured out the andoridmanifest.xml file needs to be slightly modified when importing from android studio project. I created a new test project, and copied over the headings to make it match. voila, issue solved.

This error appears in my android project with multiple kind of gfx files. At the end no change in the manifest file was accepted.

Because my lack of knowledge about the android devices I forget that my test device has a second User. This User also has an installed version of my app so I also have to delete the app for this user account and it works.

the thing that kept on killing me was that i didn’t know that this app was installed for my guest account (although I had uninstalled it for the other accounts..)

so i searched for the app in the app manager, and simply clicked on uninstall for all users 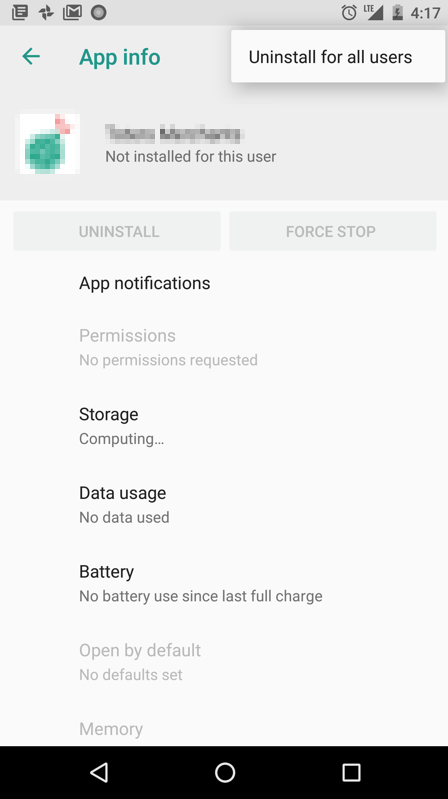 Previous article
OpenCV in Android Studio
Next article
android – Can I have onScrollListener for a ScrollView?