I have thoroughly researched this problem and the posted solutions have not worked for me.

The exact error is:

If you already have a 64-bit JDK installed, define a JAVA_HOME variable in … Environment Variables

I feel like I’ve tried everything. I HAD to have screwed up somewhere along the line. Any idea?

Try running android studio as Administrator. That worked for me. Try installing a different version of Android Studio.

This worked for me…
Try running studio64.exe instead of studio.exe.

I checked my java installation path. I found jvm.dll is located at C:\Program Files\Java\jdk1.8.0_45\jre\bin\server please check yours. 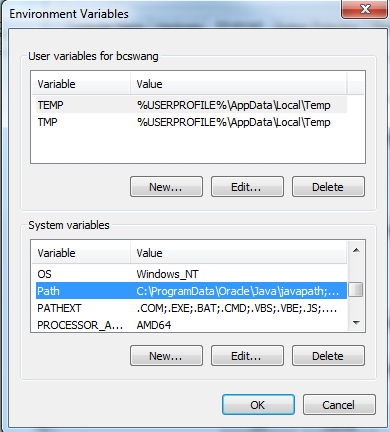 I got it working. I uninstalled everything again. Reinstalled the 64 bit jdk, remade the environment variable, rebooted, reinstalled Android Studio and it still was not working.

I downloaded the 32 bit JDK just got giggles and installed it. I did not uninstall the 64 bit java… I pointed the environment variable to the 32 bit JDK directory and tried to launch Androd studio with the 32 bit .exe (not studio64.exe), and it worked.

I guess I’ll have to live without 64 bit.

Thanks for the help, everyone.

Previous article
What's the meaning of DISALLOW_FUN in Android's source code?
Next article
android – How to fix ' You must specifiy a layout in the include tag: <include layout="@layout/layoutID" />'