When I try to launch it after installation I’m getting this error:

What I have tried:

I have tried what was reported in the error, and also in most of the solutions to set the JDK_HOME variable in environment variables to my JDK path (64 bit version) i.e. C:\Program Files\Java\jdk1.8.0_05

*I also have tried rebooting system, just in case to test if the environment variable is not working without a restart

Here is the cmd output for java version:

I had the same problem. I tried setting all kind of paths but nothing worked. So I had to do some dirty fix. The only problem with this is that it opens a blank command line window.

I did the following to make it work.

Now you can access it by clicking it from the menu.

I reproduced your issue on my Windows 8.1 system :

I got the same message you did. Thinking that it might be the environment variable, I did the following :

It came up successfully ! 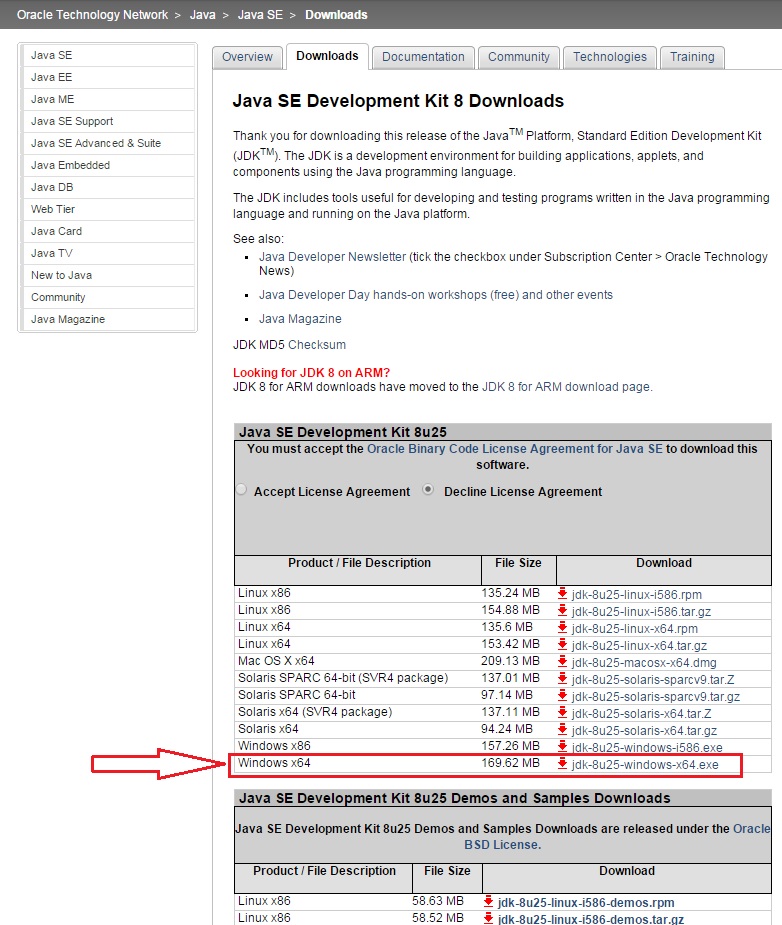 Please note that jdk1.8.0_25 may be vary depending on JDK version.

The problem is with the space between “Program” and “Files” in the path set in JAVA_HOME. I’ve had this problem before but didn’t really realize until I was checking the instructions here for setting JAVA HOME, then it all made sense.

In a nutshell, change the JAVA_HOME path from:

Make sure to set the correct JDK version number for your installation. Removing the space from the path fixed everything on my system.

As noted on the page linked above,

depending on where you have the JDK installed on your system.

Note: Just to be clear, before making this change my system correctly echoed the value of JAVA_HOME to be C:\Program Files\Java\jdk1.8.0_31 in the command window, leading me to believe all was well. However, attempting to run %JAVA_HOME%\bin\javac reported that the path could not be found. After removing the space from the JAVA_HOME path the same command runs perfectly.

Uninstall Java 8 and clean your JDK_HOME and your JAVA_HOME enviromental paths. Then install 64bit JAVA 6 or 7 JDK of your preference.

Make sure you set the path in the SYSTEM VARIABLES not in the USER VARIABLES also…..name the variable name as JAVA_HOME and the address as C:\Program Files\Java\jdk1.8.0_25\ be sure that you didn’t place any semicolon.

According to Oracle’s installation notes, you should download/install JDK for the correct system. For your convenience, I have linked to it from the sentence above. If you still encounter problems, leave a comment. I have written some quick code that will tell you if your JVM is 64 or 32-bit, below. I’d suggest you run this class and leave a comment as to its output:

Just make sure that the installed version of both, Android Studio and JDK, are of either 32-bit or 64-bit. If JDK is of 32-bit and Android Studio of 64-bit or vice-verse, then it won’t work though you set up JAVA_HOME.

Give the following details to it:

To find the path for java installation, go to program files in your window installation drive (normally C drive). Find folder named JAVA, in that navigate to JDK folder.

Copy the link address from the top, and paste it in the Variable value .

Now Press Ok and once environment variable gets created restart the android studio.

My fix was to remove the double quotes that I had enclosed the JAVA_HOME path in.

Instead of declaring JAVA_HOME as “C\Program Files…”

I removed the ” and declared JAVA_HOME as C\Program Files…

I also faced the same issue. The solution which helped me was I downloaded and installed 64 bit JDK from this link and set the “java_home” variable to the new JDK installed path like C:\Program Files\Java\jdk1.7.0_45. Hope this helps.

Had the same problem after upgrading my machine from 7 to 10 had to reinstall the JDK all overgain and took me only a few seconds.
Here are the steps I followed.

Go to this link
http://www.oracle.com/technetwork/java/javase/downloads/jdk8-downloads-2133151.html

Agree to oracle contact agreement.Then pick your windows version in my case is 64 bit after that its ..Next..Next,,once compete you can relaunch your Android studio without any problem. Hope this helps

Android Studio Works Perfectly fine with Java 1.8 or Java 8. I was also having invalid JVM error. The reason was including “;” (semicolon) at the end of JAVA_HOME path value. The correct format for path value is:

Do not include ; (semicolon) at the end of JAVA_HOME value

I added an entry named: JDK_HOME pointing to: C:\Program Files\Java\jdk1.8.0_25\ (you have to point this to your JDK instalation path)

And all seems to work fine now

You must just install jdk1.8.0 and then right click on my computer icon and then select properties,then in left panel, select advanced system settings, then in dialog bog select Environment Variables, then in that’s dialog box,in section user variables create new variable that’s name must be JAVA_HOME and path is C:\Program Files\Java\jdk1.8.0(in my pc) then sytem variable section, select PATH variable and append it’s end this path C:\Program Files\Java\jdk1.8.0\bin and then select ok for all dialog box and after this steps run Android studio. And for test, run cmd in windows and run this command java -version if returned a java version and … it is installed correctly.

This is tested on my Windows 7 64Bit machine.

Quite strange… I had the same issue – WHILE IntelliJ Idea (including the Android Plug-in) was working perfectly.

However, here is what I did to get Android Studio 1.0 working (no step missing -> maybe it will help programming beginners).

Just set up a new environment variable by…

PS: I don’t know why some people writing about nuclear science when they want to explain how to set the Java path..

If you are using windows 7, make sure you install jdk-xxxx-windows-x64.exe.
http://www.oracle.com/technetwork/java/javase/downloads/jdk8-downloads-2133151.html
I had previously installed 32 bit instead of 64 bit version hence it was installed in program files x(86) folder. But if you install 64 bit sdk setup, its installed in program files folder.
Then set the JAVA_HOME=’C:\Program Files\Java\jdk1.8.0_65′
It should work fine.

My variables pointed to other system variables so JDK_HOME was

and i had to explicitly change it to

My JAVA_HOME was pointing to c:/jre directly. So I changed it to C:/java/jre because it was confused to pick up which one to use, so I changed it to the specific one and it works for me. Note: It is better to have only one JRE install on your machine

I solved the problem in my case by deleting file

( x denotes the version of your android studio so it can be different ) , because I created it before to customize VM options.
It’s that simple

Add the your installation path and java path to the default system path by separating the ;

If it does not work after setting paths in environment variables correctly,
Reinstall Android Studio and it worked for me.

Under my Android Studio\bin there are two folder

I tried to run the first program and it gives me the mentioned error.

But when running studio64.exe it works.

I think Android does not support Java 8. Officially android need java 6 as mentioned at the below:

Here I’m providing you a good link, hope those will clear this question :

Is it possible to use Java 8 for Android development?

If your environment variables are correct that will do the trick. Enjoy!

For crying out loud this is so VERY EASY TO Fix!!

Enjoy Android Studio!
Obviously for the above to work you have to install java first or how else can you use it or point to it on your pc and all that. The above instructions are amazingly mislead and complicated. For the record I am on widows 8.1, YES it works on latest windows and is ridiculously simple to fix.

and Its working fine.