This problem sounds similar to a few others, except in my case the OK button is not grey-ed out. But for those who would rather not click the links…

Trying to create or edit an AVD from within Eclipse, after entering my settings, the “OK” button seems to be “clickable”, but when I click it absolutely nothing happens. 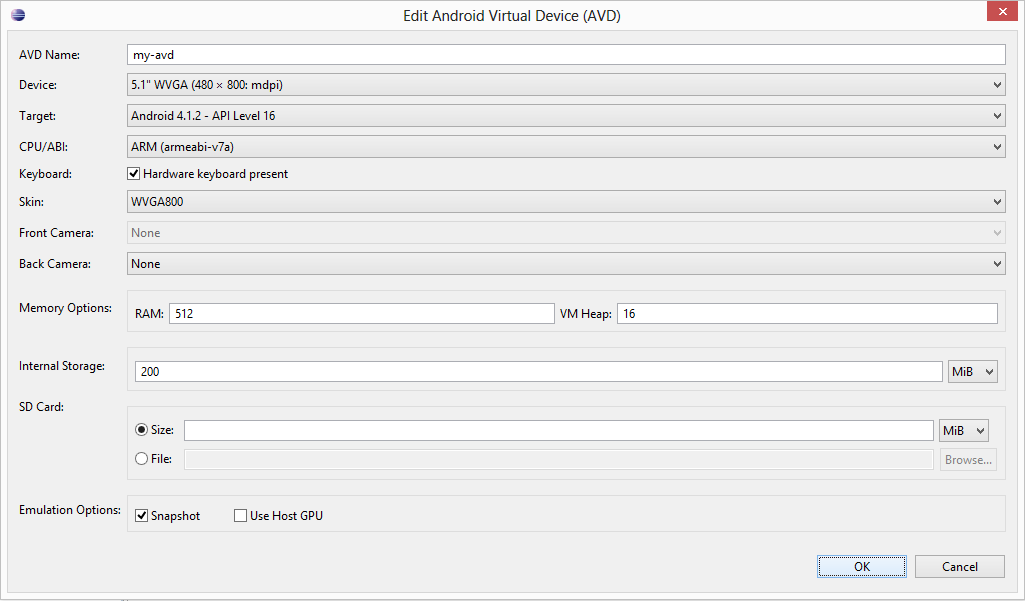 I’ve made sure I have the appropriate system images installed, and that the target platform matches the API being used. Clearly a CPU has been chosen, skin set, etc… all the things that would make the OK button greyed out, which it’s not.

I can create/edit AVDs if I run the AVD manager from outside eclipse, so this isn’t the end of the world, but I feel there’s a solution to this particular problem and I want to help solve it.

I’ve tried running eclipse as an administrator (that’s what stopped the AVD manager from crashing outside of eclipse). I’ve tried just waiting around, or clicking multiple times. Looking at the Task Manager, no new processes begin when I click OK, nor does eclipse’s CPU or RAM usage increase at all. The “Edit Android Virtual Device” window doesn’t even go away.

(Running Indigo with the ADT plugin, btw, not the bundled version, which failed to work in a different way. Java 1.6.0 45. Windows 8, unfortunately. Plenty of RAM etc)

THIS IS A POSSIBLE WORKAROUND FOR BUGS IN ADT 22.6.0 ONLY, THESE BUGS SUBSEQUENTLY FIXED IN FOLLOWING BUILDS

Download and install new ADT v22.6.1 from here (zip) or use SDK manager to update

Seems like some bug from Google side, this problem found after “ADT 22.6” update. Widely reported on “Android Open Source Project – Issue Tracker” and nobody properly answered it yet.

However I was partially successful to create an AVD by opening “AVD manager.exe” from “Android SDK” for creating new AVD try to open directly AVD Manager.exe in SDK folder.

More bad news is AVD creation not working from command line tool too.

Updated Java to JDK 1.7 Update 51 and Eclipse Standard SDK to Kepler Service Release 2 their latest and no resolution to the problems. Also tested under Debian and same results obtained.

At https://code.google.com/p/android/issues/detail?id=66661 android project members conforms the problems and promises to fix by upcoming versions of ADT (22.6.1 – 22.6.3). At the mean time I would suggest to roll-back ADT to a lower version version 22.3.0

To uninstall current ADT go to

Hope this will solve this problem temporarily. And wait for new release of ADT here.

New ADT, version 22.6.1 is out now which will solve these problems

To elaborate on the statement “I can create/edit AVDs if I run the AVD manager from outside eclipse” in the OP:

Run the following on the command line

This launches the same AVD window you see when you click the AVD Manager icon in the eclipse toolbar. But this instance of the AVD manager does not have the bug, and you can create and run emulators as you did before the bug was introduced.

I used a quick workaround where I cloned a device that already existed. The Clone button worked and I was able to successfully edit the clone.

Select a Device by Google 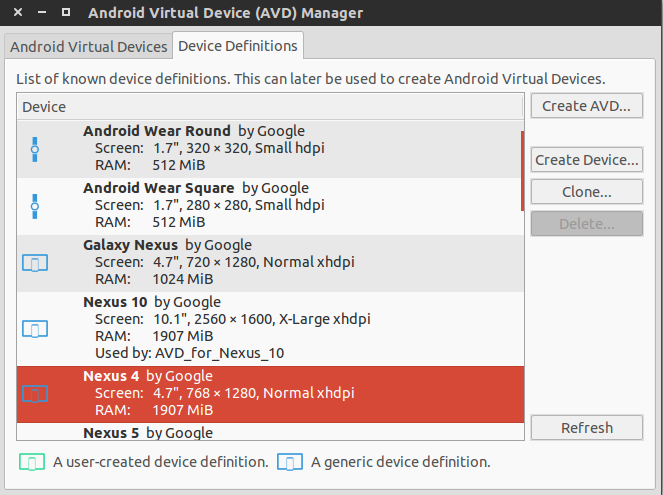 Select the newly cloned Device, it should say “… by User”

There you have it, you now have your own custom virtual device 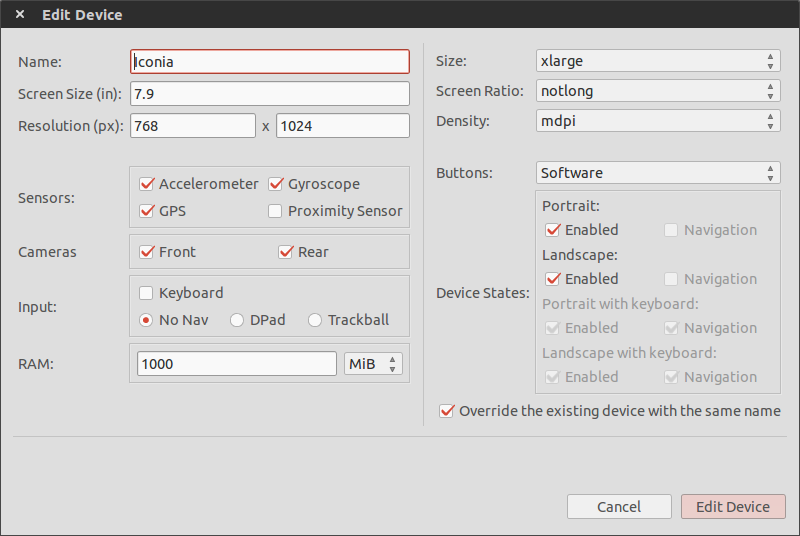 Update and Solution: AsYashwanth Krishnan said, The bug in question is now fixed in later versions. I tried ADT 222.6.1 and ADT 22.6.2 , and they did not suffer from the bug of not not being able to create or edit Android Virtual Devices. The direct solution is to update you ADT to latest version, The workaround written below is left only for historical purposes.

Historical Workaround As @Yashwanth Krishnan said, this is a bug in ADT plugin 22.6; so best workaround is to rollback. for those asking how to rollback, here is a step-by-step guide: 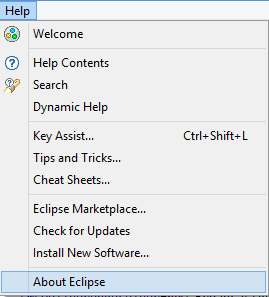 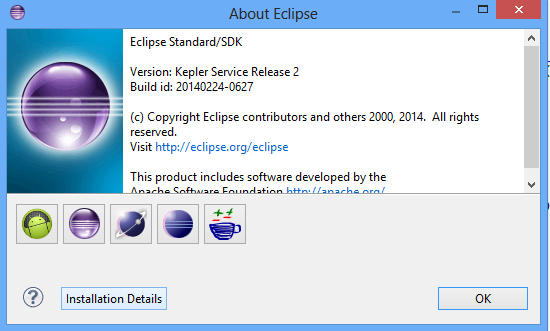 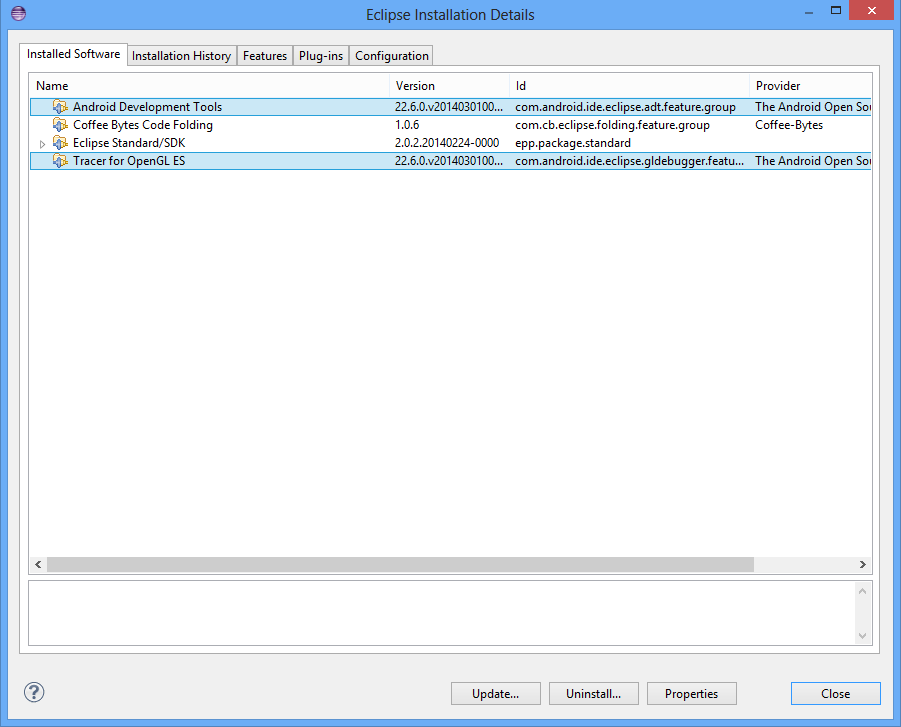 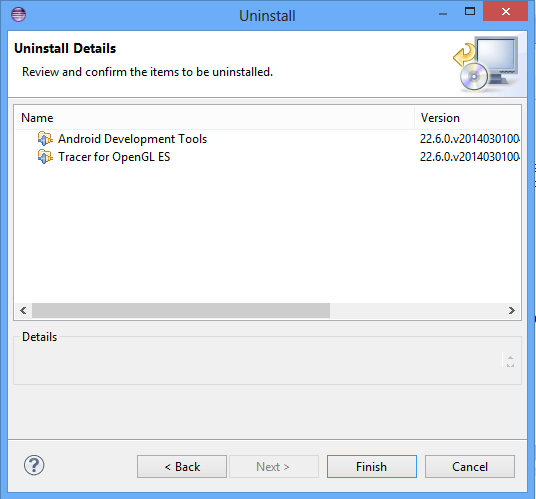 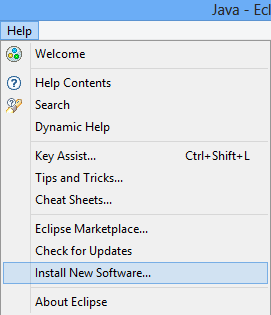 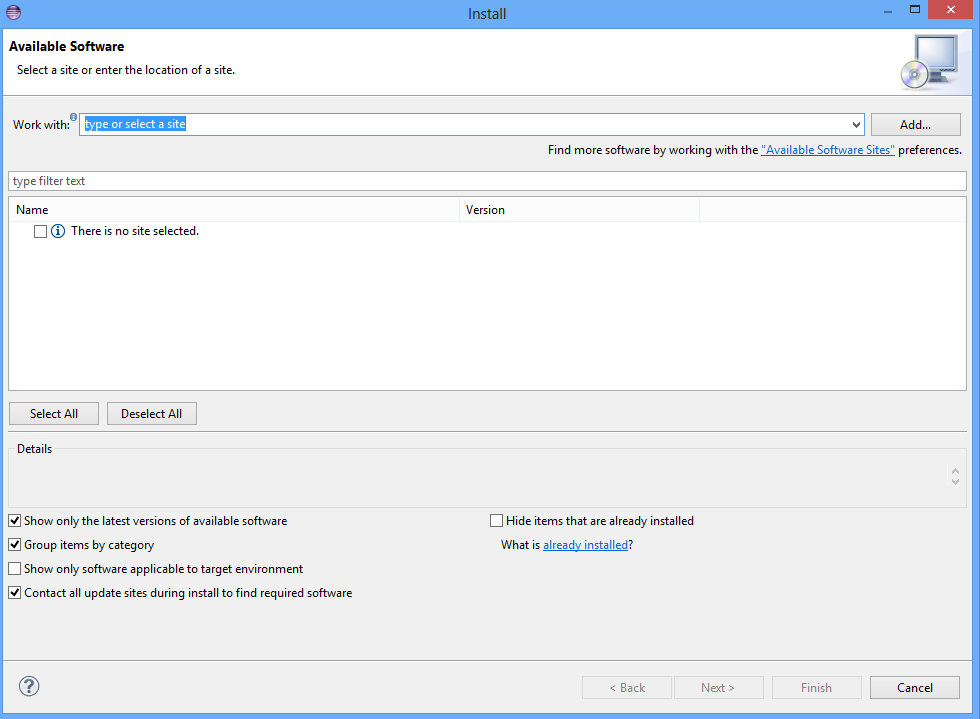 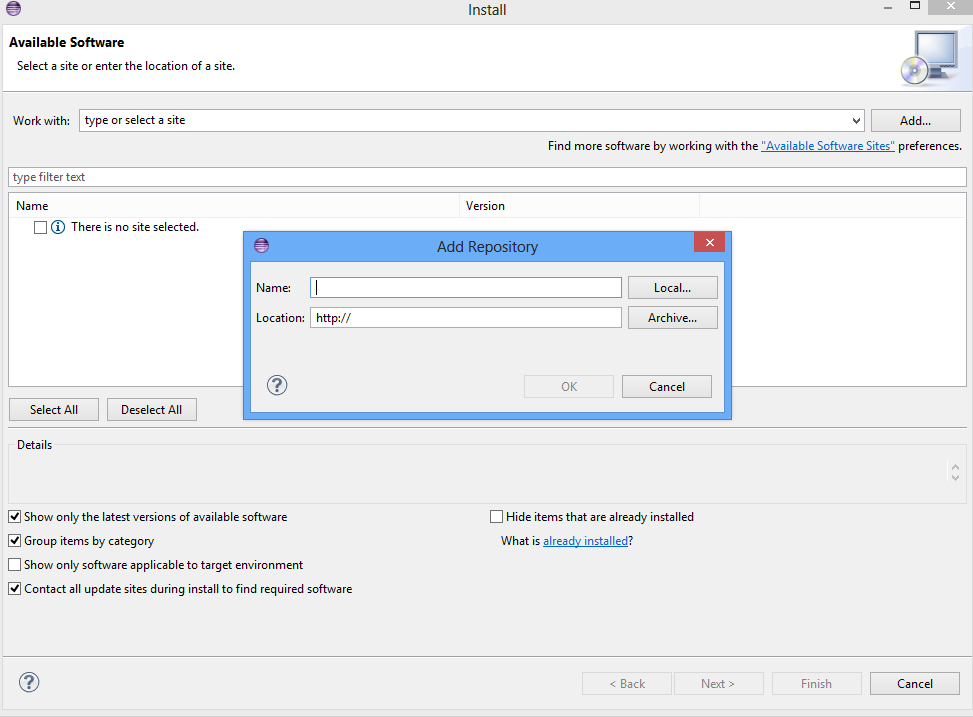 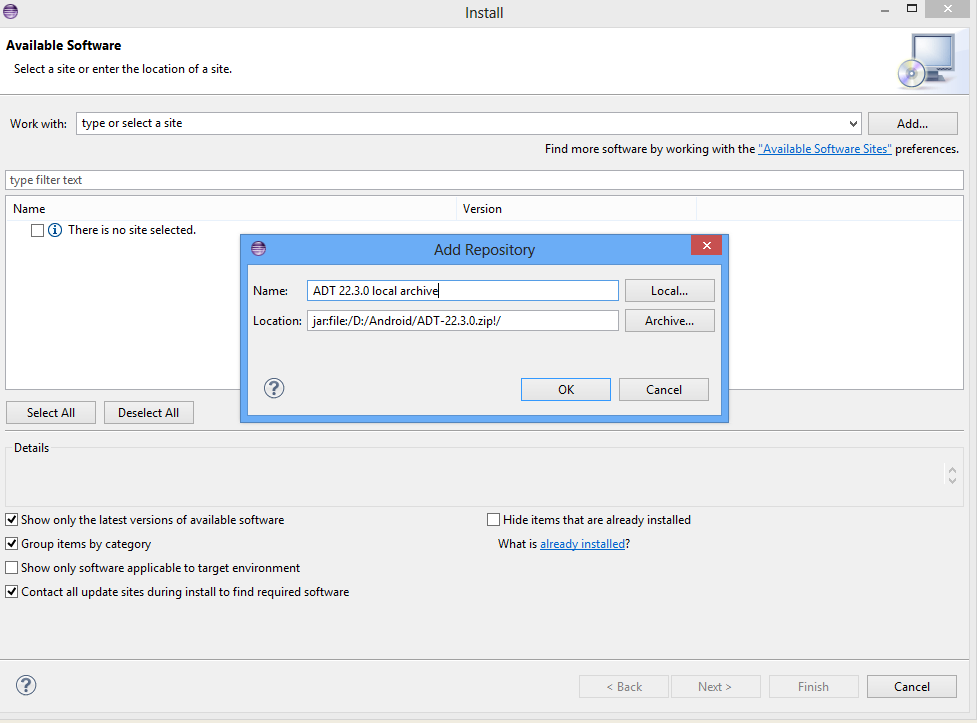 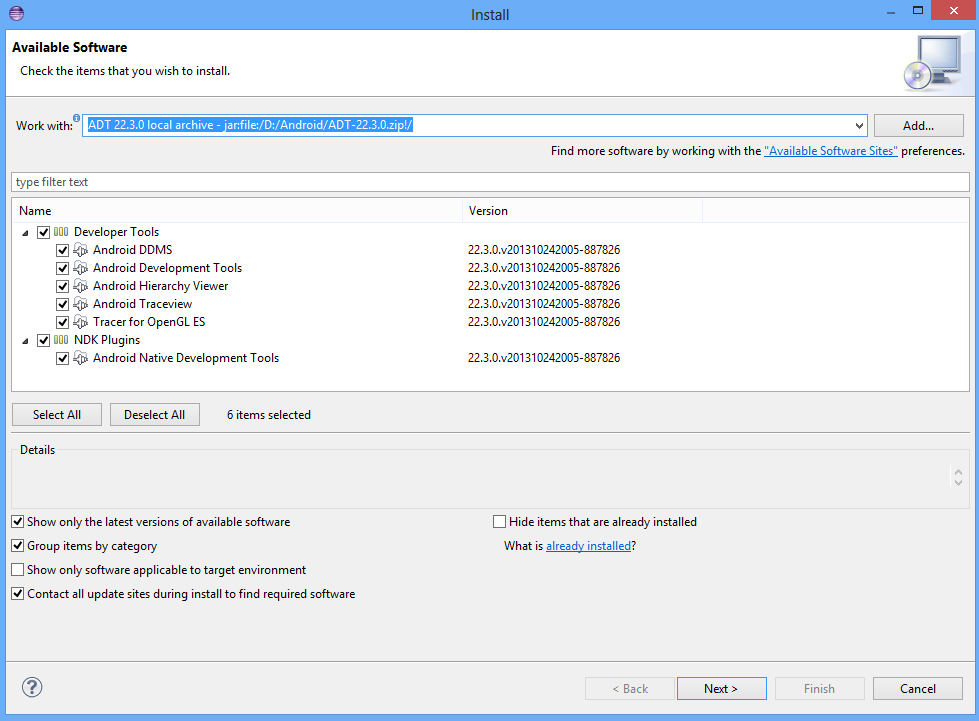 I WAS able to create an AVD successfully after clicking OK several times and modifying some of my settings as a test.

I tried yashwanth krishnan solution and tried to open the AVD Manageer.exe directly without success. The manager will not open directly for me on Windows 8 x64. It tries to open, then shuts down immediately…

I met this issue too . The issue occurs in the latest version 22.6 which was released in March . Meanwhile I did the testing in 22.3 , the issue was not found .

I also heard that it may help things if you install the Android SDK to a path without spaces.

Hope this helps someone keep some hair.

Today I ran into the same problem after installing Maven. I messed around with different Path settings to get it to work and I ran into issues. I was also trying to install the google server for GCM. Somewhere in what I was doing I corrupted the Android Virtual Device Manager. I searched S.O. for an answer, then I decided to follow the first rule of TechSupport. I reinstalled the tool kit!

I went into the SDK manager and I uninstalled the tools (by clicking the Tool checkbox). It took several minutes to delete them all. Then I reinstalled the Tools which took about ten minutes. I rebooted Eclipse and the AVD and worked just like it did yesterday!

This time it only took a total of twenty minutes to fix.

Per the release notes, this problem has been resolved in revision 22.6.1, which is now available for download.

Updated your Android SDK Tools to 22.6.1 in Eclipse by selecting Window > Android SDK Manager and follow the prompts to install the update.

After that update finishes, select Help > Check for Updates and follow the prompts to update the appropriate Eclipse components.

After completing these updates, I tested the AVD functionality and it appears to be working properly.

i just copied the avds from a different system as descriped here:
Android – How to copy the emulator to a friend for testing

I faced the similar issue. I am using 23.0.2 version of android SDK.

“OK” button was disabled, but then I went to the path where android SDK was installed. In my case:

and executed AVD-Manager.exe by right clicking and selecting Run as an Administrator, and it worked like a charm.

Sometimes the AVD cannot be created because of this following error while starting:
x86 emulation currently requires hardware acceleration!

I was also facing this same issue. If u are facing the same, then it can be resolved by opening SDK Manager -> Under Extra -> Installed “Intel x86 Emulator Accelerator (HAXM Installer). Then when creating the AVD, select the proper CPU. This should work. 🙂

For those posting that we need to set the sdcard size: I tried that and many other settings, and none of that helps. I get the NoClassDefFound Exception mentioned by mogilka, in the Error view. No configuration settings are going to fix that. It seems a bad update was pushed