I’ve downloaded one of the open source Android Applications (the music application) from the Android git, and I’m trying to create a new project from the source. Creating a new project using that existing source doesn’t work giving me an “invalid description error”. Any help?

You must be referring to the error message “invalid project description“.

See this thread (relevant extracts below, with emphasis mine):

If you see a .project in the application you downloaded, you can try a "File" + "Import" + "Existing Projects into Workspace" and select the directory of the music sample.

But if not, using New> Android Project> Create project from existing source is the
right way to do it.
Make sure to select which Android target you want (1.1 or 1.5 or 2.0):
the “new project” wizard will automatically select the right sample directory for you.
Then select “Browse” and the Music directory. It should then fill the properties at the bottom of the new android project wizard.

However you should not put your workspace in %ANDROID_HOME%\samples.
Leave it somewhere else (My Documents, whatever).
I suspect you get a conflict because Eclipse tries to create a project and there’s already
a directory of the same name.
In either case, can you look at your_workspace_dir/.metadata/.log for a more verbose error and post it?

See also this tutorial (for the Snake sample)

I wanted to open up the Snake sample provided in the SDK samples.
For this, choose ‘Create project from existing source’ in the New Android Project window and select the Snake directory from Samples.
This will set the package name, activity name, and application name for you. 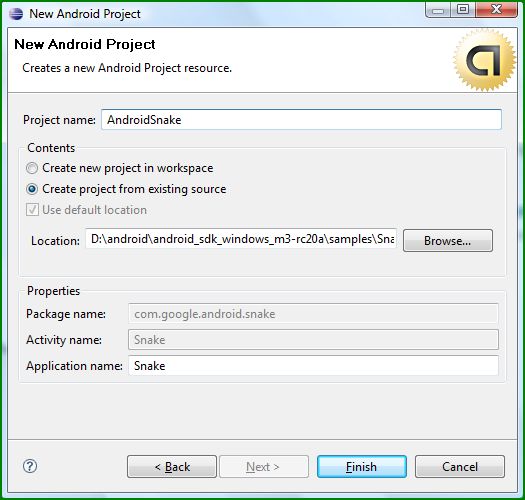 That being said, if after importing the project, you end up (like the OP) with tons of errors.
See question R cannot be resolved – android error:

R is an automatically generated class that holds the constants used to identify your resources.

Other cause for massive compilation errors all over the Eclipse Android project, as reported by the OP himself (GuyNoir):

The code I downloaded from git was the newest version, and probably for Android 2.1, where the SDK I’m was creating it under was Android 1.5.
So I’ll need to download older code or install the latest SDK.