I’m completely lost regarding the differences between the initLoader and the restartLoader functions of the LoaderManager:

Call to initialize a particular ID with a Loader. If this ID already
has a Loader associated with it, it is left unchanged and any previous
callbacks replaced with the newly provided ones. If there is not
currently a Loader for the ID, a new one is created and started.

This function should generally be used when a component is
initializing, to ensure that a Loader it relies on is created. This
allows it to re-use an existing Loader’s data if there already is one,
so that for example when an Activity is re-created after a
configuration change it does not need to re-create its loaders.

[…] After calling this function, any previous Loaders associated with this ID
will be considered invalid, and you will receive no further data
updates from them.

There are basically two cases:

Here’s the simplified code for both methods:

As we can see in case the loader doesn’t exist (info == null) both methods will create a new loader (info = createAndInstallLoader(…)).
In case the loader already exists initLoader only replaces the callbacks (info.mCallbacks = …) while restartLoader inactivates the old loader (it will be destroyed when the new loader completes its work) and then creates a new one.

Thus said it’s now clear when to use initLoader and when to use restartLoader and why it makes sense to have the two methods.
initLoader is used to ensure there’s an initialized loader. If none exists a new one is created, if one already exists it’s re-used. We always use this method UNLESS we need a new loader because the query to run has changed (not the underlying data but the actual query like in SQL statement for a CursorLoader), in which case we will call restartLoader.

The Activity/Fragment life cycle has nothing to do with the decision to use one or the other method (and there’s no need to keep track of the calls using a one-shot flag as Simon suggested)! This decision is made solely based on the “need” for a new loader. If we want to run the same query we use initLoader, if we want to run a different query we use restartLoader.

We could always use restartLoader but that would be inefficient. After a screen rotation or if the user navigates away from the app and returns later to the same Activity we usually want to show the same query result and so the restartLoader would unnecessarily re-create the loader and dismiss the underlying (potentially expensive) query result.

It’s very important to understand the difference between the data that is loaded and the “query” to load that data. Let’s assume we use a CursorLoader querying a table for orders. If a new order is added to that table the CursorLoader uses onContentChanged() to inform the UI to update and show the new order (no need to use restartLoader in this case). If we want to display only open orders we need a new query and we would use restartLoaderto return a new CursorLoader reflecting the new query.

Is there some relation between the two methods?

They share the code to create a new Loader but they do different things when a loader already exists.

No, it never does.

Is it safe to call initLoader twice to refresh the data?

It’s safe to call initLoader twice but no data will be refreshed.

When should I use one of the two and why?

That should (hopefully) be clear after my explanations above.

A LoaderManager retains its state across configuration changes (including orientation changes) so you would think there’s nothing left for us to do. Think again…

First of all, a LoaderManager doesn’t retain the callbacks, so if you do nothing you won’t receive calls to your callback methods like onLoadFinished() and the like and that will very likely break your app.

Therefore we HAVE to call at least initLoader to restore the callback methods (a restartLoader is, of course, possible too). The documentation states:

If at the point of call the caller is in its started state, and the
requested loader already exists and has generated its data, then
callback onLoadFinished(Loader, D) will be called immediately (inside
of this function) […].

That means if we call initLoader after an orientation change, we will get an onLoadFinished call right away because the data is already loaded (assuming that was the case before the change).
While that sounds straight forward it can be tricky (don’t we all love Android…).

We have to distinguish between two cases:

Calling restartLoader destroys an already existing Loader (as well as any existing data associated with it) and tells the LoaderManager to call onCreateLoader to create the new Loader and to initiate a new load.

The documentation is pretty clear about this too:

I recently hit a problem with multiple loader managers and screen orientation changes and would like to say that after a lot of trial-and-error, the following pattern works for me in both Activities and Fragments:

(in other words, set some flag so that initLoader is always run once & that restartLoader is run on the 2nd & subsequent passes through onResume)

Also, remember to assign different ids for each of your loaders within an Activity
(which can be a bit of an issue with fragments within that activity if you’re not careful with your numbering)

I tried using initLoader only …. didn’t seem to work effectively.

Tried initLoader on onCreate with null args (docs say this is ok) & restartLoader (with valid args) in onResume ….docs are wrong & initLoader throws a nullpointer exception.

Tried restartLoader only … works for a while but blows on 5th or 6th screen re-orientation.

Tried initLoader in onResume; again works for a while & then blows. (specifically the “Called doRetain when not started:”… error)

Tried the following : (excerpt from a cover class that has the loader id passed into the constructor)

(which I found somewhere in Stack-Overflow)

Again, this worked for a while but still threw the occasional glitch.

From what I can figure out while debugging, I think that there is something to do with save/restore instance state that requires that initLoader(/s) are run in the onCreate part of the lifecycle if they are to survive a spin of the cycle. ( I may be wrong.)

in the case of Managers that cannot be started until the results come back from another manager or task (ie. cannot be initialised in onCreate), I only use initLoader. (I may not be correct in this but it seems to work. These secondary loaders are not part of the immediate instance-state so using initLoader may actually be correct in this case) 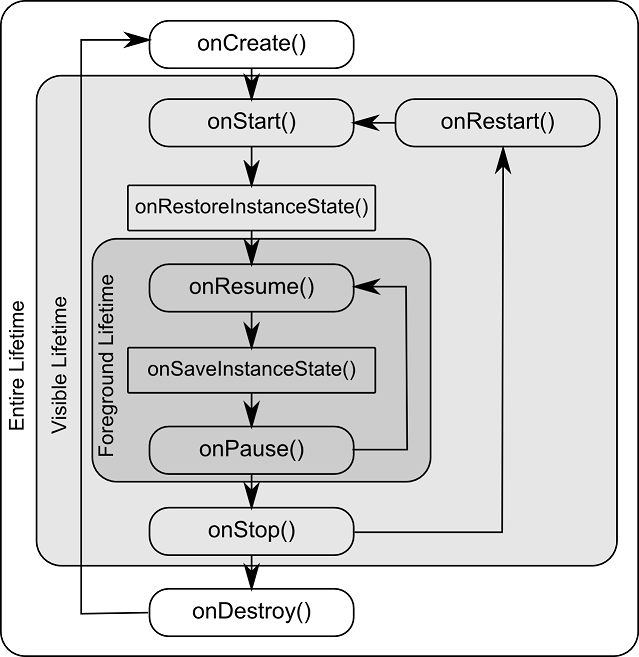 Looking at the diagrams and docs,
I would have thought that initLoader should go in onCreate & restartLoader in onRestart for Activities but that leaves Fragments using some different pattern and I’ve not had time to investigate if this is actually stable. Can anyone else comment on if they have success with this pattern for activities?

initLoader will reuse the the same parameters if the loader already exists. It returns immediately if old data is already loaded, even if you call it with new parameters. The loader should ideally automatically notify the activity of new data. If the screen rotated, initLoader would be called again and the old data would be immediately displayed.

restartLoader is for when you want to force a reload and change the parameters as well. If you were to make a login screen using loaders, you would call only restartLoader each time the button was clicked. (The button may be clicked multiple times due to incorrect credentials etc.). You would only ever call initLoader when restoring the activity’s saved instance state in the event the screen was rotated while a login was in progress.

If the loader already exists, restartLoader will stop/cancel/destroy the old one, while initLoader will just initialize it with the given callback. I cannot find out what the old callbacks do in these cases, but I guess they will just be abandoned.

I scanned through http://grepcode.com/file/repository.grepcode.com/java/ext/com.google.android/android/4.0.1_r1/android/app/LoaderManager.java but I cannot find out what the exact difference is, apart from that the methods do different things. So I would say, use initLoader the first time and restart for the following times, though I cannot say with certainty what each of them will do exactly.

Init loader on first start uses loadInBackground() method, on second start it will be omitted. So, my opinion, the better solution is:

I spent many time to find this solution — restartLoader(…) didn’t work properly in my case.
The only forceLoad() lets to finish previous loading thread without callback (so you will have all db transactions finished properly) and starts again new thread. Yes, it demands some extra time, but is more stable. Only the last started thread will take callback. Thus, if you want to make tests with interrupting your db transactions — your welcome, try to restartLoader(…), otherwise forceLoad(). The only convenience of restartLoader(…) is to deliver new initial data, I mean parameters.
And please don’t forget to destroy loader in onDetach() method of the suitable Fragment in this case. Also keep in mind, that some times, when you have an activity and, let them say, 2 fragments with Loader each one inclusive activity — you will reach only 2 Loader Managers, so Activity shares its LoaderManager with Fragment (s), that’s shown on the screen first during loading. Try LoaderManager.enableDebugLogging(true); to see the details in each certain case.

Previous article
How do I update the notification text for a foreground service in Android?
Next article
android – How to add Action Bar from support library into PreferenceActivity?