I know this question has been asked here a few times before. But i haven’t seen any possible solution yet.
Before i make the project ‘Run as Android Application’ , if i do not clean it, i receive the following error and have to restart Eclipse … and clean again.

com.jstun.core… is a part of my src folder, of course i can’t remove it. And even if i remove that package, another package will show up as an error like:

I’ve seen this error since updating to ADT 15, i’m using Eclipse Galileo on Ubuntu
Do you have any idea? Thanks for any reply!

This is a build path issue.

I have encountered a similar error today and the reason was that the support library was referenced by two library projects used by my app project but with different versions.

In more details:
My app depends on 2 library projects

To solve the problem I had to make FaceBookSDK library depend on ABS library instead of the support library directly.

Well for me, I deleted the file in the libs folder called android support v4.jar and it all worked out. Goodluck 🙂

I had the same error happening and every time I fixed it, it would come back after I restarted Eclipse.

First of all, as other people said, make sure you do not have multiple copies of the same .jar file around your projects.

In my case, I had a main project that used ActionBarSherlock (among other library projects). The trick that worked for me was going into ActionBarSherlock --> Properties --> Java Build path --> Order of Export and unselecting Android Private Libraries. Then going into Project -> Clean and now you should be able to build the project correctly.

Now, for some reason, every time I restart Eclipse, it automatically enables that checkbox, so I have to repeat this process again.

Hope this helps some lost soul out there 🙂

To me, just go to Project Properties >> Java Build Path >> Order and Export. Uncheck all external library, as the image bellow. It work for me. Hope this help. 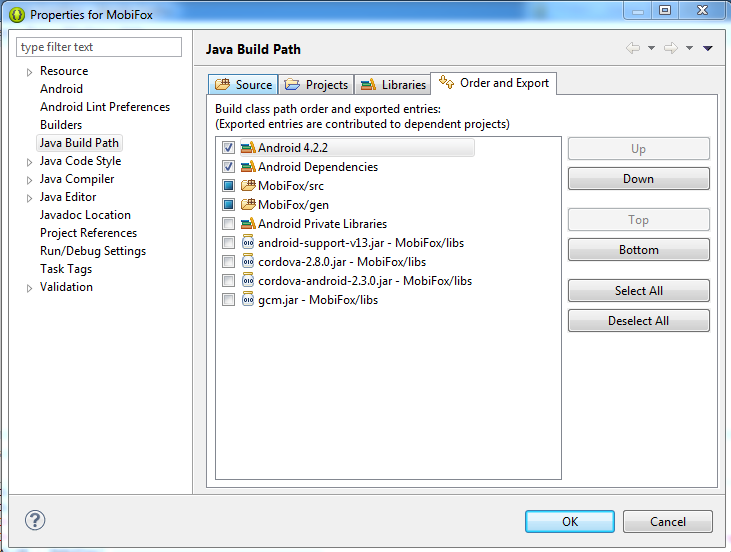 Then,I created new projects and copied MainActivity.java,activity_main.xml, drawable context.
Then delete old project from package explore,restart your Eclipse and AVD.
My project is now working properly…. 🙂
I hope this steps will help u little bit folks..!!

I have same issue, what i tried is:

It works for me, thanks.

try to remove files in bin/class/com/facebook/android directory ! -> and rebuild

As others mentioned, this occurs when you have multiple copies of the same class in your build path, or elsewhere in your setup.

You can test for this with

Deleting the extra copy in bin/classes solved the problem – unsure why Eclipse made a copy there.

I got this error for another reason. I was mistaking adding both the v4 AND the v13 support library. This was not necessary for me since my minSdkVersion is 15.

I fixed it by only including the v13 support library. Also, make sure to check mark the library in your exported library build path in eclipse. I also moved it to the top.

Even after going through multiple answers, no solution worked for me.

I deleted “Android Dependencies” from the build path.
Added all the jar files again to the build path and the error was gone.
Somehow eclipse seemed to cache the things.

I’m leaving this answer for someone who gets in this scenario as I did.

I stumbled here and there before noticing that I mistakenly dragged and dropped the Support Library JAR file into my src folder and it was lying there. Since I had no idea how it happened or when I dropped it there, I could never imagine something was wrong there.

I was getting the same error, I found the problem after sometime and removed it. Project is now working fine.

The Solution for me was just to do following things:

My problem at first was:

3) So I went to the “lib” folder on my project and delete the “old” Android.support.library.jar
(Run the app and cross fingers and…)

I have had this issue and that doesn’t mean, that the same library is loaded many times but System is trying to load a class with the same name and possibly same package name simultaneously, i.e.

How should you approach?
You should analyze which methods are being used, a method of library1.jar or library2.

I hope that has clarified this often asked question.

I removed Android dependencies from build path and it worked.

I had same problem. I had to delete the .apk file and then it worked.

For me I deleted android-support-v4.jar from lib folder and also removed from build path.

and then clean your project and run it will work 🙂

In case anyone else bangs their head on this issue like I just did:

My case involved a chain of library projects. Simply doing a project clean on all of the libraries fixed everything

I found below solution in eclipse…hope it works for you 🙂

I was also struggling to find this is issue. In my case what happened is while copying the apk to email (drag drop) – by mistake the apk was pasted in src folder in one of the packages.
After removing the apk from source folder it worked fine.

I had this problem in Intellij and it was because the ActionBarSherlock library I added to my project defined the android-support-v4.jar as a compile dependency and this jar was already included in my project so there were multiple copies/version of DEX at compile time.

The solution was to change the ActionBarSherlock module dependency for this jar to be Runtime instead of compile, as my project was already providing it.

For me the issue was that, i had added a lib project(autobahn lib) earlier and later switched the to Jar file of the same library.Though i had removed references to the older library project, i was getting this error.
Following all the answers here i checked the build path etc. But i haven’t added these libs to build path manually. So i had nothing to remove.
Finally came across this folder.

I noticed that there were two jar files with the same name corresponding to autobahn Android which was causing the conflict. So i deleted all the jar files in the dexedLibs folder and rebuild the project. That resolved the issue.

To add the myriad of other potential sources… I had updated all the libraries in my project’s lib folder but then Eclipse “helpfully” reinstalled all the original libraries. There was no longer any reference inside Eclipse to these libraries but the external dex-maker program just grabbed all the files in the lib directory and thus got two versions of several library .jar files.

git status identified the new files and git clean -f got rid of them for me (though I sometimes had to wait or restart Eclipse on Windows because it still had the files open from the copy).

Remove everything in Right Click Main Project’s Folder -> Properties -> Java Build Path except Android X.Y (where X.Y is the version in android). Clean, and Build. Done!

Make sure before of that to have a single android-support-v4.jar.

If you are using cordova, try cordova clean command