java – What is the different between Handler, Runnable, and Threads?

What is the difference between Handler, Runnable, and Threads?

While I was working with android, and I need something to run in the background. I use Threads to run it. Usually I would write a class that extends Thread and implement the run method.

I have also saw some examples that implments runnable and pass into runnable into Threads.

However I am still confused. Can someone give me a clear explanation?

Why use Runnable over Thread?

What is runOnUiThread actually doing?

What is a Handler?

Runnable is just an interface you need to instantiate a thread to contain it. Whereas thread already contains the ability to spawn a thread.If you extend Thread you can’t extend anything else (Java doesn’t support multiple inheritance). You can have multiple interfaces on a class, therefore you could have Runnable.

Also, When you extends Thread class, each of your thread creates unique object and associate with it. When you implements Runnable, it shares the same object to multiple threads.

Handler is written in Java (internally use a Thread), so everything you can do with Handler, you can achieve using a Thread too.

So why should you use Handler? Reason is as below

To bind by the 2 rules stated above, In android we have 3 built-in methods that can handle the situation when one of your Activity classes are run on or called from a different thread.

We can then schedule the UI updates to be run on the UI thread with these three methods below. The Activity or View then works as a handler (more on handlers below) and schedules your runnable to the UI thread:

UI thread is the main thread in which the UI elements like View and Activity are rendered. Any time consuming operations should not happen in the UI Thread. The application default runs in UI Thread. You need not do anything special to use the UI Thread.

Handler, Runnable, and Threads actually work together, I dont think you should compare them.

allows send messages between two threads in a safe manner, that means that sending thread puts message into destination thread queue, and this destination queue will process this message in its appropriate time.

this is an interface that you implement, in implementation you put logic you want to execute on some thread. You can actually use Runnable also in non thread related places. Lots of Java apis actually use Runnable, not only Thread’s. You can post Runnable using handler, or you can use it with executors. Runnables are nice because you can implement them in a form of anonymous implementation.

you meant UI Thread? Most user interfaces implements its workings in single thread, all UI elements: windows/widgets communicate using messages (just like in Handler). Ie. user presses button, this initiates a message with information that button was pressed, it is send to UI thread and finally delivered to your listener.

In Android it is forbidden (results in exception) to modify UI elements from non UI thread, this makes sense – if you would modify it from other thread this could happen while UI thread is doing some changes to the same widget – resulting in Undefined Behaviour.

I use Threads to run it. Usually I would write a class that extends Thread and implement the run method.

1.What is the point of Runnable if one can write the background code in the Thread’s run method?

Using Runnable and creating a Thread from Runnable is general practice.

From oracle tutorial on concurrency regarding Runnable Vs Thread usage :

2.How is Handler used inside thread and why do we need to use it.

It’s a vast topic to explain. In simpler terms from official documentation site: 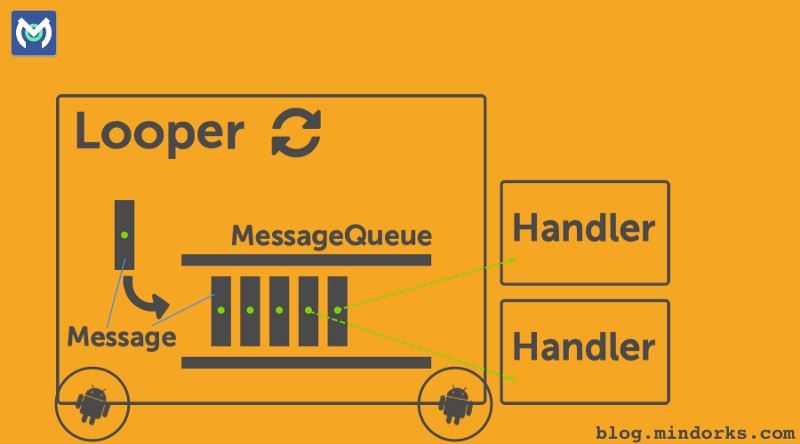 3.Android has another thing call runOnUiThread, How do we use that? I know that it is used for updating the UI.

You can find more details by looking into implementation of runOnUiThread

Refer to below post for example code of Handler usage.

Android: Toast in a thread

What is the point of Runnable if one can write the background code in
the Thread’s run method?

Also, Runnable interface represent a Task which can be executed by either plain Thread or Executors or any other means. so logical separation of Task as Runnable than Thread is good design decision.

Runnable Interface is parent of Thread Class and run() is method of Runnable Interface
So normally we should prefer Runnable interface over extending thread class because we don’t want to change behavior of the class and we can also extend another class .It also help in achieving loose coupling as well as we have a benefit of changing the User Interface from any other class.

We Can change Ui in 4 ways

2.By Using runOnUIThread() we have to attach runOnUIThread with post it can be easily understood with example

3.By using any View we can call by any view here i have called with switch

4.By making Handler in another Thread we have to define Looper because by default it attach us to our thread looper

This are 4 ways of implementing so I think from it you may now something about runnable thread and runOnUIThread() and Handler is written by other person beautifully.

Previous article
vba – AutoFilter NOT seeing numerical data in Filtered view (Multiple Values)
Next article
How can I get the current Excel file in Office JavaScript API?