I’m trying to find this query where I want to show which hosts uses which template from my Zabbix table. The only problem is that hosts and templates are registered in the same table. They are mixed in the table with for example ID 11813 being a host and 11815 being a template.
Now I’ve found a table where the relation between these 2 is defined: hosts_templates.

This table has 3 columns:
a host_template id, hostid, templateid

The table hosts has many columns but also containing: hostid, name where hostid contains the hosts as well as the templates. the table hosts does have a templateid column but IT IS NOT USED.

In the table hosts_templates I can see which hosts uses which template. The only problem is I see the IDs and I want to see the name matching that ID.
What I have so far: 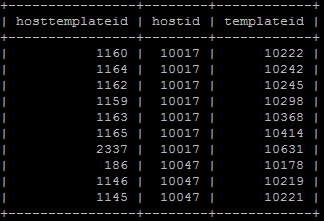 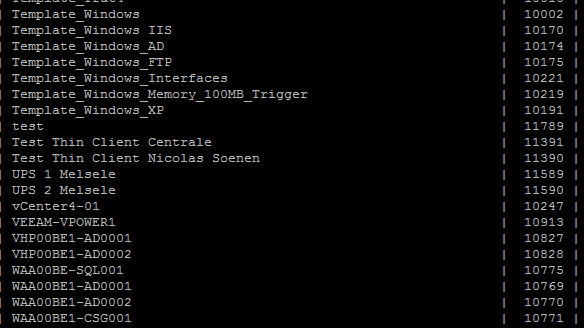 what I have tried so far:

The output from these queries shows half of my solution, but duplicated.

the problem is I can’t pick a different name for the second column so it just duplicates the first column which is not what I want… And as I already have inner joined the hostid i can’t do it a second time. So I need like a combination of the 2 sql queries above. I have the feeling i’m so close but I just can’t get it.

Any help would be greatly appreciated!

You have to join twice. Give the table different aliases so you can distinguish them.

This is a basic question. You should learn more about SQL syntax, such as chained joins, accessing same column name from different tables.

as you r selecting data from one table ie host_templates ony

use it ,it works