Okay, let me start by saying I am a noob at this. I’m following this step-by-step video, and I still found a way to mess it up somehow. I’ve tried reading related questions, but I don’t really know much about VBA to make sense of the answers.

Basically, I’m trying (and failing) to create an “Employee Manager.” At around 9:44 of the video, the narrator said we’ll need to create a macro to hide and show specific cells depending on what tab we click on.

Here is my code for Sheet1:

And I have this code under modules, with the macro named SwitchHTabs:

This error pops up when I try to run the code: 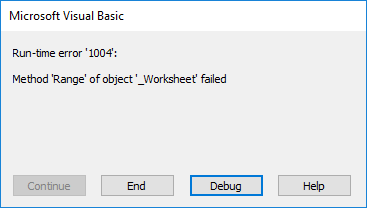 And when I click Debug, it highlights this line of code:

Compare your two Range lines in that sub:

For the sake of argument, let’s assume that FirstRow is 1, and then process that second line of code:

Hopefully it is now easier to see that you have used a Full-Stop in place of a Colon.