If whatever you are doing is “heavy” you should be doing it in a Thread. If you do not explicitly start it in its own thread, then it will run on the main (UI) thread which may be noticeable as jittery or slow to respond interface by your users.

Interestingly when you are using a thread it is often useful to also use a Handler as a means of communication between the work thread that you are starting and the main thread.

In general though, the take home is that you should use a Thread any time you are doing some work that could be long running or very intensive (i.e. anything network, file IO, heavy arithmatic, etc).

A thread must be created to execute long running jobs.

A Handler is very convenient object to communicate between 2 threads (for instance : a background thread need to update the UI. You can use a Handler to post some Runnable from your background thread to the UI thread).

So you don’t have the choice between Handler or Thread. Use a thread to do heavy jobs! (you can use a Handler if your background thread will trigger some job to be done in another thread – most of the time the UI thread)

Handler and Thread are two different things, but they do not contradict each other. You can have a Handler and a Thread at the same time and actually each Handler must be running in a Thread.

For more details, you may want to check out this article. 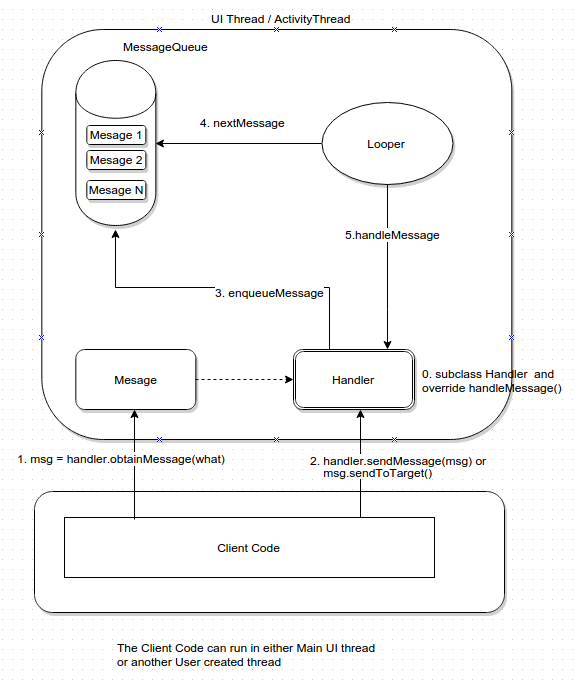 A Handler runs on the same Thread, a Thread runs on a different thread.

Use a Handler if you need to run something on the same thread, usually a GUI element or something like that.

Use a Thread if you want to keep the main thread free to do other things. Use this for anything that takes a significant amount of time.

Handlers are the best way of communication between the background and UI thread. Generally Handlers are associated with message Queue of a Thread and they are used to send messages and runnable to the Message.

Thread: To do tasks in saperate(Background) thread than UI thread. (helps to unblock the UI thread)

Handler Used to communicate between the UI and Background thread.

Have a look at this article

You can use the android.os.Handler class or the AsyncTasks class for
this.

The Handler class can update the user interface. A Handler provides
methods for receiving instances of the Message or Runnable class.

You thread can post messages via the sendMessage(Message msg) method
or via the sendEmptyMessage() method.

… more info here about threads etc. (includes turorials for the different threading and sync mechanisms and when to use what)

What are the advantages / reasons to use a Handler and not a Thread?

When you create a new Handler, it is bound to the thread / message queue of the thread that is creating it — from that point on, it will deliver messages and runnables to that message queue and execute them as they come out of the message queue.

There are two main uses for a Handler:

If you use java threads, you have to handle somethings on your own – synchronizing with main thread, cancelling a thread etc.

This single Thread does not create a thread pool unless you use ThreadPoolExecutor or ExecutorService API.

(Taken this query from your comments on Blackbelt answer)

Why not use an Executor? and even if I did want to use a Handler to do that, how?

There are certain types of work that can be reduced to highly parallel, distributed tasks. With the sheer volume of work packets this creates, AsyncTask and HandlerThread aren’t appropriate classes. The single-threaded nature of AsyncTask would turn all the threadpooled work into a linear system. Using the HandlerThread class, on the other hand, would require the programmer to manually manage load balancing between a group of threads.

ThreadPoolExecutor is a helper class to make this process easier. This class manages the creation of a group of threads, sets their priorities, and manages how work is distributed among those threads. As workload increases or decreases, the class spins up or destroys more threads to adjust to the workload.

You can refer to this developer guide article on create-threadpool for more details.

Have a look at this post for usage of Handler to run multiple Runnable instances. In this case, all Runnable tasks will run in a single Thread.

Android: Toast in a thread

Handler can be used in conjunction with Thread in order to create a Queued mechanism. Uou can use the handler to post something on the Thread Looper