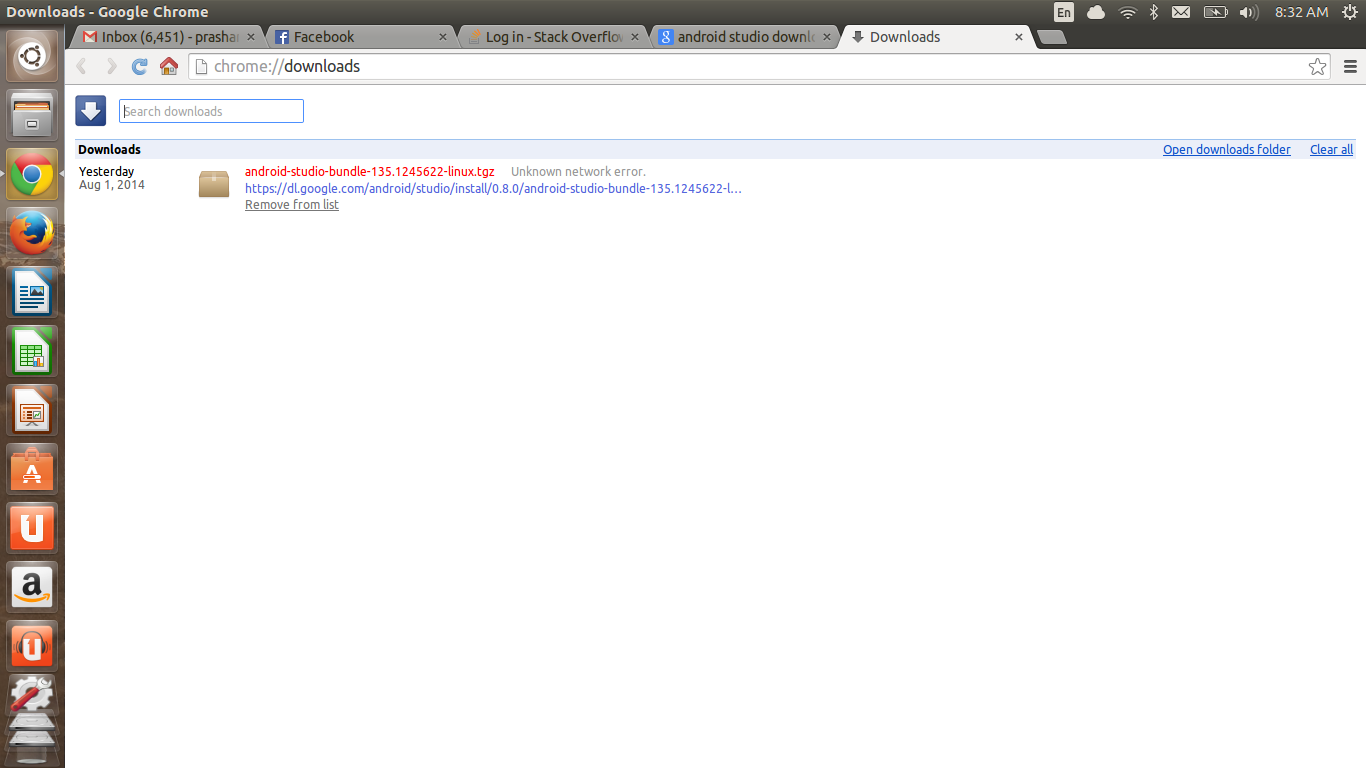 Whenever I try to download android studio for Linux, when last second is left it shows network error. I tried it 5 times and same thing happened. At the last second the download cancels and it shows “unknown network error”. I have tried downloading on Windows and Ubuntu but the result was same. I was able to download android studio for Windows without any problem.

There seemed to be a problem in such downloads itself,regardless of the browser or the antivirus and all…
Download it using Internet Download Manager.
press Ctrl+J ->opens downloads folder…
right click on the link which says “https://dl.google.com/dl/android/studio/install/1.0.1/android-studio-bundle-135.1641136.exe” (Encircled in red in the image)
then copy the link address and paste the same in Internet Download Manager.
after 4 hours it still remains at 99.99%…
Pause the download and start again…
This time it completes ..100%
And all the downloaded files get appended to one file.

The actual problem occurs in transferring the downloaded files from cache to your system folder.Resuming the download somehow overrides this.
No need to diable firewall or antivirus in this method.

OR use the zipped download from here and then extract it and run the .exe file yourself.

Downloading with Chrome on Win 7 failed all the time for me. I tried with Firefox, and although it gave the same error, I was able to finish the download with “Retry” button in Downloads in Firefox, because it downloads not from the beginning of the file, but resumes the downloading.

So install Firefox and retry the download until it is finished.

I found the solution!

Definitely a Chrome issue, at least the Windows 10 version of Chrome. Using Microsoft Edge or maybe another solves the problem. I used Edge and it downloaded without any pauses or hiccups.

This problem happens when downloading the full kit ‘android studio IDE + JDK 7.0’, the reason is JDK 7.0 being on another server and it’s possible that google server uses proxy settings that blocks traffic when downloading – I am not sure yet.

The only way around it is to dowload ‘android studio IDE’ only, during the installation you will be given a link and prompted to install JDK 7.0 on Oracle website, so do that as well.

That did the trick.

PS: For anyone suggesting disabling the firewall while connected to the internet for the period of the download, well ..

I was running into the same difficulty with Firefox on Ubuntu. Downloading the command via console is what ultimately worked for me:

I had same problem with Chrome and Firefox -> the last kb or so refused to download.

Solution was simply to change the name of the downloaded file:

Edit: I have now used Android Studio for several weeks without problem.

I know that this is the old post, but I’m still facing with this issue. The workaround for me was to download zipped version of Android studio from softpedia.com (http://www.softpedia.com/get/Programming/Other-Programming-Files/Android-Studio.shtml#download)