My understanding of this is that for NFC-enabled smart phones (Nexus S) it is possible to read RFID tags, but there are restrictions.

For non-NFC-enabled Androids we need a RFID reader to which we can communicate from Android using Bluetooth.

You can hijack your Android audio port using an Arduino board like this. Then, you have two options (as far as I’m concerned):

2) Try to connect your Arduino hijack with a USB RFID reader and build some embedded hardware kit.

Right now, I’m working in the second option but with iPhone.

NFC enabled phones can ONLY read NFC and passive high frequency RFID (HF-RFID). These must be read at an extremely close range, typically a few centimeters. For longer range or any other type of RFID/active RFID, you must use an external reader for handling them with mobile devices.

You can get some decent readers from a lot of manufacturers by simply searching on google. There are a lot of plug in ones for all device types.

I deal a lot with HID readers capable of close proximity scans of HID enabled ID cards as well as NFC from smart phones and smart cards. I use SerialIO badge readers that I load a decryption profile onto that allows our secure company cards to be read and utilized by an application I built. They are great for large scale reliable bluetooth scanning. Because they are bluetooth, they work for PC/Android/iOS/Linux. The only problem is, HID readers are very expensive and are meant for enterprise use. Ours cost about $400 each, but again, they read HID, SmartCards, NFC, and RFID.

If this is a personal project, I suggest just using the phone and purchasing some HF-RFID tags. The tag manufacturer should have an SDK for you to use to connect to
and manage the tags. You can also just use androids NFC docs to get started https://developer.android.com/guide/topics/connectivity/nfc/. Most android phones from the last 8 years have NFC, only iPhone 6 and newer apple phones have NFC, but only iOS 11 and newer will work for what you want to do.

First is understanding that RFID is very generic term. NFC is subset of RFID technology. NFC is used for prox card, credit cards, tap and go payment system. Your phones can read and emulate NFC (Apple pay, Google pay, etc.), if they support NFC. NFC is very short distance and low power – which is why you see tap and go type usage.

The more common RFID are the tags you see here and there. They come in a wide ranges of styles, uses and frequency.

HF – high frequency tags are what they use for “chipping” animals – cattle, dogs, cats. Read range is about 12 inches and requires an external antenna that is powered the bigger the antenna the more power it needs and the further it can read.

UFH tags look similar to HF tags but have a read range of several feet.

Mutiread means when a reader is active, you can litterally read about 1700 tags in under 10 seconds.

But this is a function of the size of the antenna and how much power you can push through the reader.

As to the direct question about Android and RFID – the best way to go is to get an external handheld reader that connects to your mobile device via Bluetooth.
Bluetooth libraries exist for all mobile devices – Android, Apple, Windows.
From there its just a matter of the manufacturer documentation about how to open a socket to the reader and how to decode the serial information.

The TSL line of readers is very popular because you don’t have to deal with reading bytes and all that low level serial jazz that other manufactures do. They have a nice set of commands that are easy to use to control the reader.

Other manufactures are basic in that you open a serial socket and then read the output like you would see in terminal app like PuTTY.

A UHF RFID reader option for both Android and iOS is available from a company called U Grok It.

It is just UHF, which is “non-NFC enabled Android”, if that’s what you meant. My apologies if you meant an NFC reader for Android devices that don’t have an NFC reader built-in.

Their reader has a range up to 7 meters (~21 feet). It connects via the audio port, not bluetooth, which has the advantage of pairing instantly, securely, and with way less of a power draw.

They have a free native SDK for Android, iOS, Cordova, and Xamarin, as well as an Android keyboard wedge.

I recently worked on a project to read the RFID tags.
The project used the Devices from manufacturers like Zebra (we were using RFD8500 ) & TSL.

More devices are from Motorola & other vendors as well!

We have to use the native SDK api’s provided by the manufacturer, how it works is by pairing the device by the Bluetooth of the phones and so the data transfer between both devices take place! The programming is based on subscribe pattern where the scan should be read by the device trigger(hardware trigger) or soft trigger (from the application).

The Tag read gives us the tagId & the RSSI which is the distance factor from the RFID tags!

This is the sample app:

We get all the device paired to our Android/iOS phones : 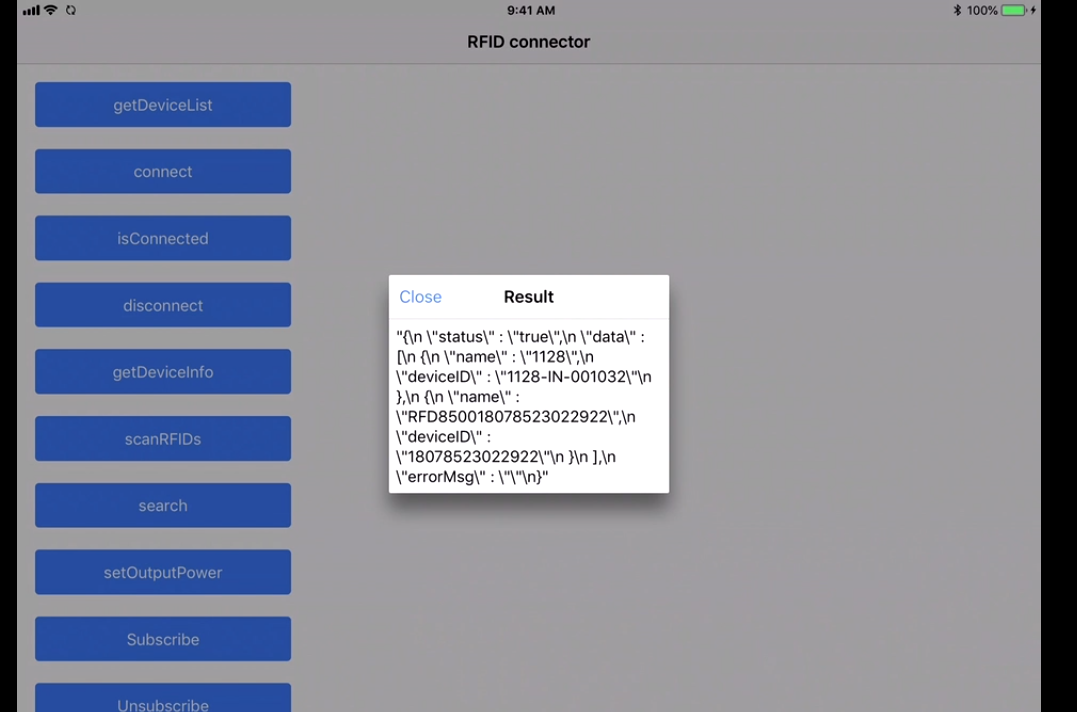 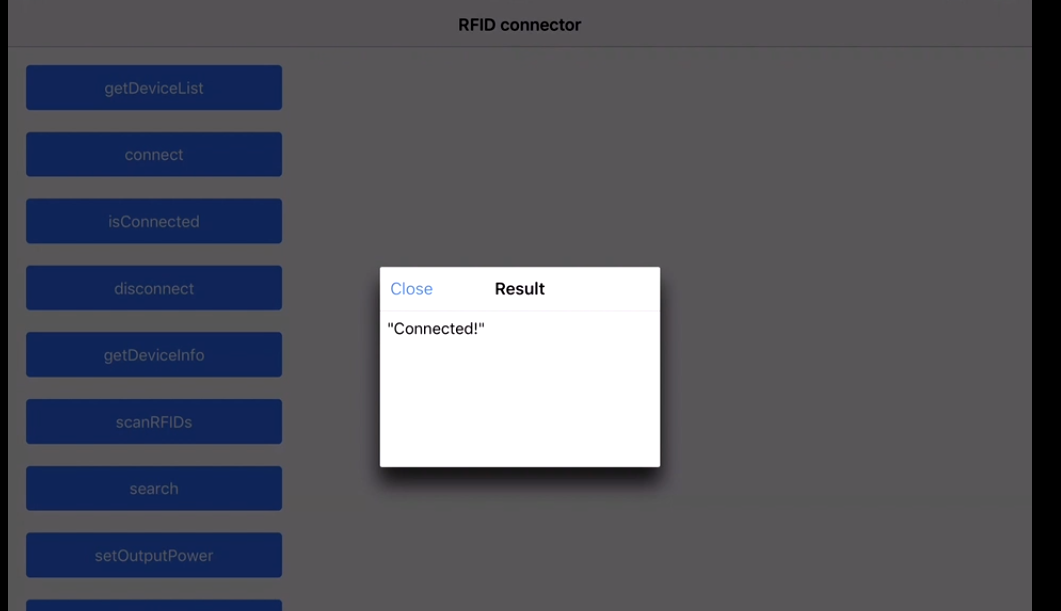 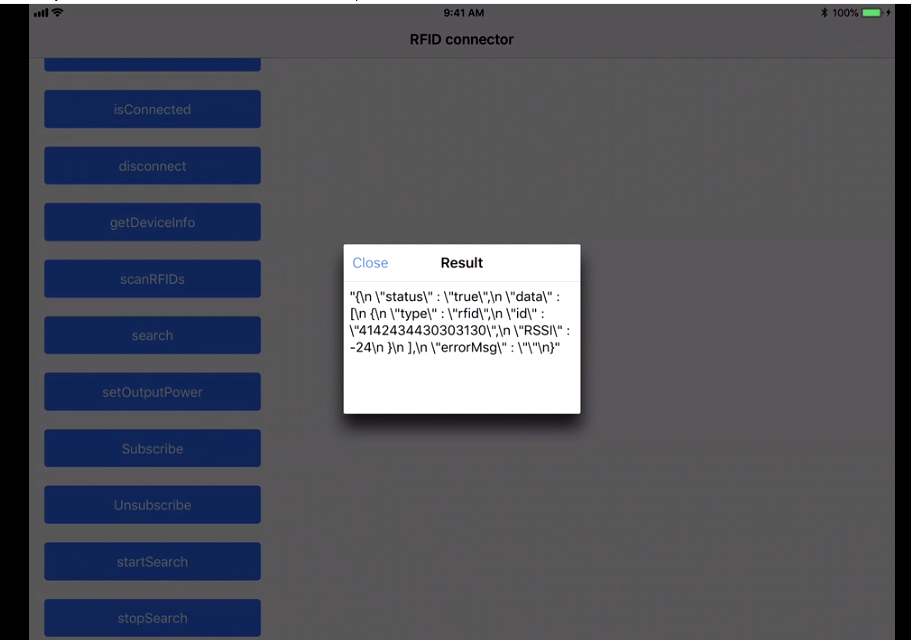