Cannot find PHPUnit in include path is the error message I get when I try to run my code in phpstorm.

In the PHP Settings, my PHP level language is 5.4 (traits, short array syntax, etc.) and interpreter is Name(5.4.7) where Name is user defined.

The error appears when I try to run the code and the exact message is this:

Just encountered this problem myself.

I’m unsure why it is unable to find PHPUnit in the include path (despite the fact that it is there, albeit in all lowercase).

I got around this by changing my IntelliJ Preferences for PHPUnit (under PHP --> PHPUnit). I changed the PHPUnit library settings to Use custom loader and then specified the path to the phpunit executable. On my mac, that was /usr/local/Cellar/php54/5.4.26/bin/phpunit.

I just discovered that pear now installs PHPUnit as a phar named phpunit. It previously installed the PHPUnit source, which was really nice for reference and code completion in PHPStorm. I think that this is the reason things aren’t working any longer with PHPStorm, because it’s expecting a php executable and not a php archive.

So, I’m moving away from using pear to install PHPUnit, and I’m using composer instead. This bundles PHPUnit directly as a dependency of my project, which makes it more portable than a system dependency. You’ll need to add vendor/phpunit/phpunit as a PHP include path in your PHPStorm preferences. This will serve two purposes:

To do this, go to Languages and Frameworks in the PhpStorm settings.
If you click on PHP, on the right you have your include paths

I had this problem after adding PHPUnit via composer.

This is the way to do it without using composer, and using your global phpunit. 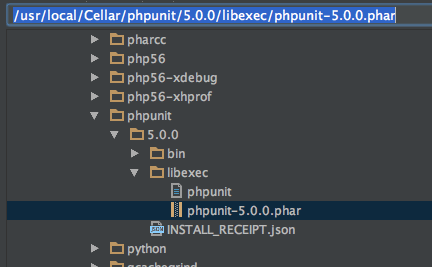 In addition to Ben’s answer, in phpStorm 7.1.3 it works by specifying the phpunit.phar location under the “use custom loader” option, for example:

For future readers, to fix the same issue when using PHPStorm + Vagrant + PHPUnit by defining path to the global phpunit.phar (not composer)

While the tests runned successfully, I was missing the code completion. I had confirmed that phpunit was in the PATH on my local machine, and to make sure, I had added /usr/local/bin to the PHP Include paths in PHP Settings. Still no code completion.

The reason: PHPstorm was looking for phpunit.phar, not just phpunit. To fix, on my local machine I established a symlink phpunit.phar pointing to phpunit:

Then I reindexed the project, and code completion started working.

Previous article
How do I get the MySQL table structure in PHP? Plus a list of all tables?
Next article
php – Many-to-many relationships examples