I am getting weird issue of sending push notification to android using FCM.

As we debug the code we do have device token in our database no firewall which stops sending push notifications.

Every time i call above function i got

Any Help Would be appreciated.

Don’t know much about php, but recently I have faced the same issue in another project and I have resolved this way :

Refere this first :
Where can I find the API KEY for Firebase Cloud Messaging?

and get updated API key as shown in below snapshot 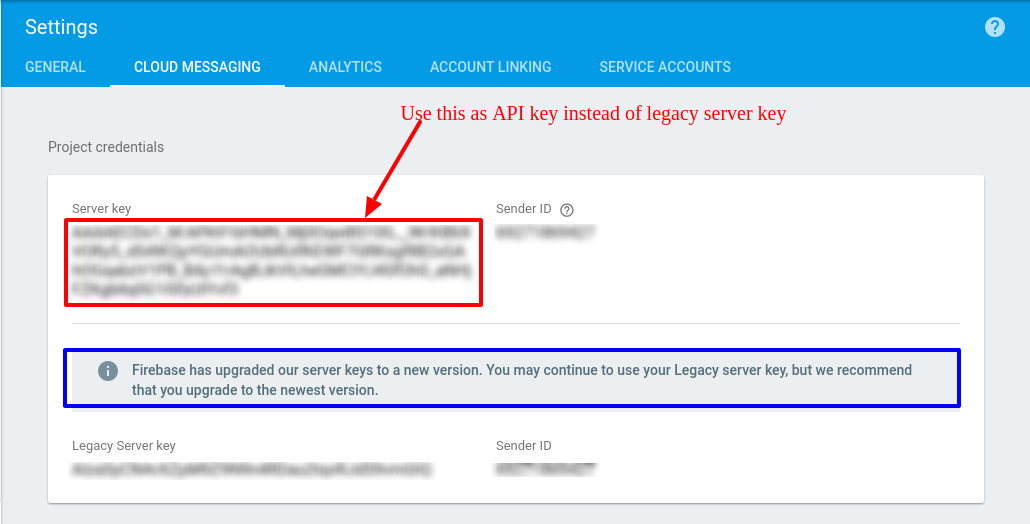 If it is NotRegistered, you should remove the registration ID from
your server database because the application was uninstalled from the
device, or the client app isn’t configured to receive messages.

This is a client-side (device) issue, not service-side.
Multiple scenarios can cause this:

On app startup I check to see if the token I have stored locally matches the new token. If not then I refresh the token on my servers. I also do this in FirebaseInstanceIDService::onTokenRefresh.

See if you have uninstalled the app and your device token is modified. Update the device token, and your error will be gone

While searching for the “NotRegistered” issue, we found the following …

At device end, the generation of device notification token was done by following code once, when user first time starts the app after installation.

We were using other class derived from “FirebaseMessagingService” to create / receive notifications. But the following method was missing in that class.

We found that, the above method was called by FCM system in device on every start of App. ( The App was not Uninstalled, still the method was giving different token every time. ) So we called our method ‘sendRegistrationToServer(token);’ to submit the token to our server along with the ‘DeviceId’ and other identification data. When we sent notification from php server on this token, it returned ‘sent’ instead of “NotRegistered”.

The thing is firebase generates a unique device Id for your target device when the app is run for the first time,and is being used as the identity of the device,If the User uninstalls the app or clears the data of the app then In that case On re installing or reopening the app the device Id will differ which will not be identified by firebase to send the notification this will result in the error Not Registered

This error appeared in an Android application when sending request to https://fcm.googleapis.com/fcm/send:

If I changed push token (added “1”, for instance), then I got another error:

So, Firebase knew about the push token, but didn’t deliver a notification.

I uninstalled the Android application and installed again.

My problem was different then all of the above. The Firebase message that we we’re trying exceeded the maximum size of 4Kb. Very small chance this triggers an “NotRegistered”. But the problem was that I took this log of a moment the app was probably not installed. So also check the size of the Firebase message.