php – How to configure PhpStorm to use symfony/phpunit-bridge

I had problems with configuring PhpStorm IDE to use http://symfony.com/doc/current/components/phpunit_bridge.html while working with Symfony 3.3.

I decided to just download phpunit.phar to bin and use it instead.

Symfony 3.4 (and Symfony 4), does not even have phpunit.xml.dist out of the box, so there is a problem with using phpunit.phar easily.

That created phpunit.xml.dist and I was able to run tests from command line by:

But again I could not make PhpStorm use it.

So I downloaded phpunit.phar and it can work together with provided phpunit.xml.dist.

Question 1: Is there any way for PhpStorm IDE to use phpunit-bridge?

Question 2: What is the best practice for Symfony 4 (phpunit-bridge or vanilla phpunit.phar)?

What I usually do is point my phpunit testing framework on PHPStorm to the secret .phpunit directory which was created by the bridge, like: 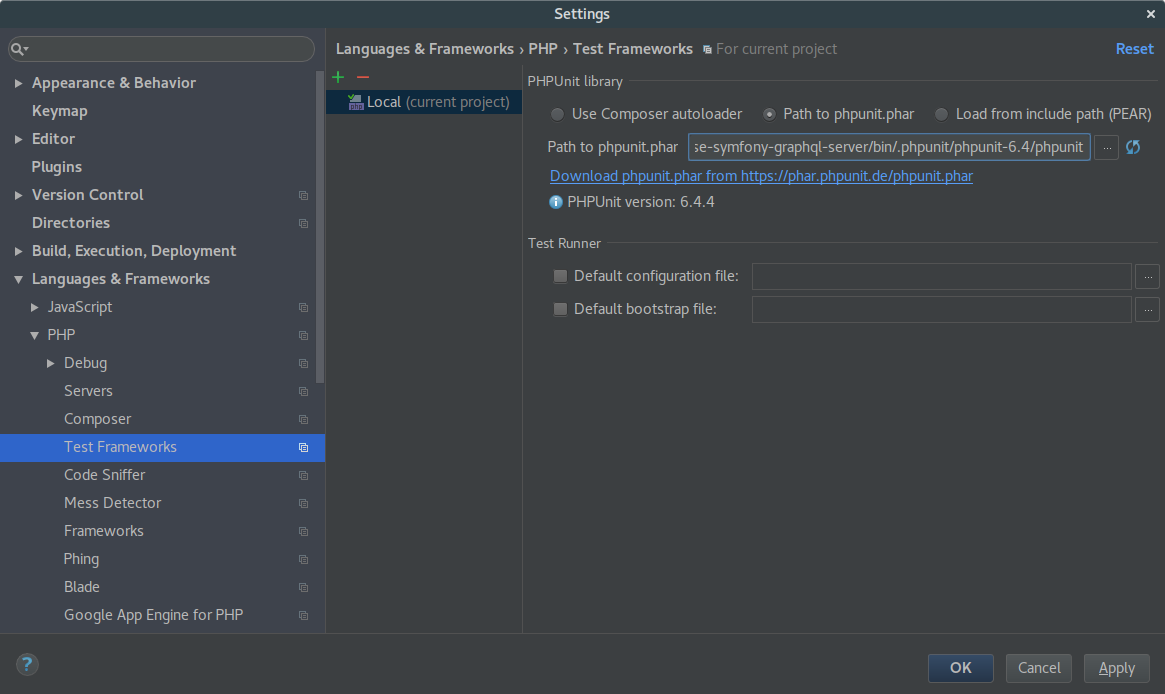 The location of the “phar” file is:

or in some cases:

After this, the specified phpunit executable will be called correctly when exeuting unit-tests, but with a --no-configuration option. This can cause autoloading problems (a lot of “class not found” errors), because the autoloader generated by Composer is not specified anywhere.

To fix this, you should have a phpunit.xml file in your project (this is common practice anyway), in which you specify Composer’s autoloader, something like this:

This phpunit.xml should then be specified in the “Default configuration file” option and you should be good to go.

Regarding phpstorm using phpunit-bridge:
It’s possible as a custom script, but you won’t have the nice interface and the possibility to run (and debug) specific tests via PHPStorm interface.

I manage to run symfony/phpunit-bridge with success using this configuration:

Aside given answer, it’s worth mentioning that the secret .phpunit directory won’t appear out of thin air.

After composer req phpunit, one has to run the phpunit script first, eg.:

which will download a local copy of the PHPUnit and place it in the same folder, so the path to the phar executable will be:

It is very simple and doesn’t matter version of Symfony, because of the concept of testing still stable. At first, you need to configure test framework on the PHPstorm preferences (screenshot), in your case, you can to use Vendored PHPUnit or downloaded manually, you can join in the PHPUnit library section. Then you need to add Run/Debug configuration.
"phpunit/phpunit" and "symfony/phpunit-bridge" as I see was installed, this is all.