php – The difference between Symfony and Silex

I would like to try Silex but i’ve some questions.

I know to use Symfony2 and i would like to know if Silex is very different of Symfony or it’s the same thing (same operation, same code… ) ?

A few things worth noting:

That said, Silex will not give you the bundles that Symfony2 has.

Here are some interesting thoughts on when to use Silex (especially in the comments):
https://web.archive.org/web/20160131151109/http://www.testically.org/2011/10/11/is-there-a-specific-situation-when-to-use-a-php-micro-framework-like-silex/

Silex itself is pretty bare, which means that if you want more then just routing and tests you will need to add specific features (DB, Twig …) in form of Services.
I recommend to take a look at some readymade Plates that provide you with this:
https://github.com/lyrixx/Silex-Kitchen-Edition
or
https://github.com/ivoba/superleansilexplate (thats mine :))

Another point is that Silex has a probably lighter footprint than Symfony2, so if you need a smaller & faster site, Silex is worth a consideration.

(UPDATE) Since Symfony 2.8 You can use symfony 2 as a microframework with a micro kernel controller. See short description here: symfony.com/blog/new-in-symfony-2-8-symfony-as-a-microframework. Now Symfony gives us more control over the structure and architecture. Good alternative to Silex if You prefer the Symfony 2 style.

Comparing Silex to Symfony before 2.8 release

Silex microframework is based on Symfony but it’s not exactly the same thing. Using a full-stack framework such as Symfony for a small project is simply overkilling the project.

In a microframework, you have more flexibility to choose the tools you want to use. You can make more decisions about application architecture and logic.
In a full-stack framework with some extend you would have an architecture and a logic already predefined with restrictions and limitations to its configuration.

Silex was designed to build up the tool rather than get the set tools that you might not need. I would say that for small projects in Symfony you would have to remove features – were in Silex you would have to add them.

It is also not true that Silex isn’t fit for larger projects. Silex can be used with success for larger projects but remember that you would have to build up your tools to fit your requirements (if you need to customize the architecture and logic – perhaps this is the right way to go). Other than that, I would consider using Symfony instead, because Symfony already has bunch of tools available out of the box. 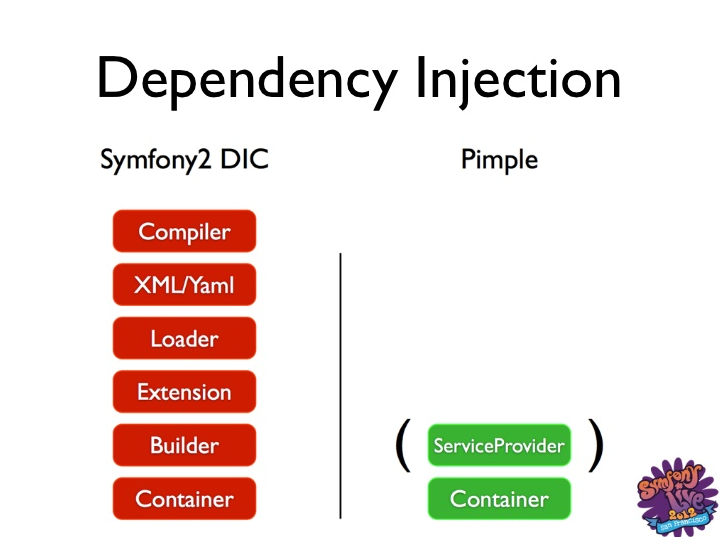 Bear in mind that: 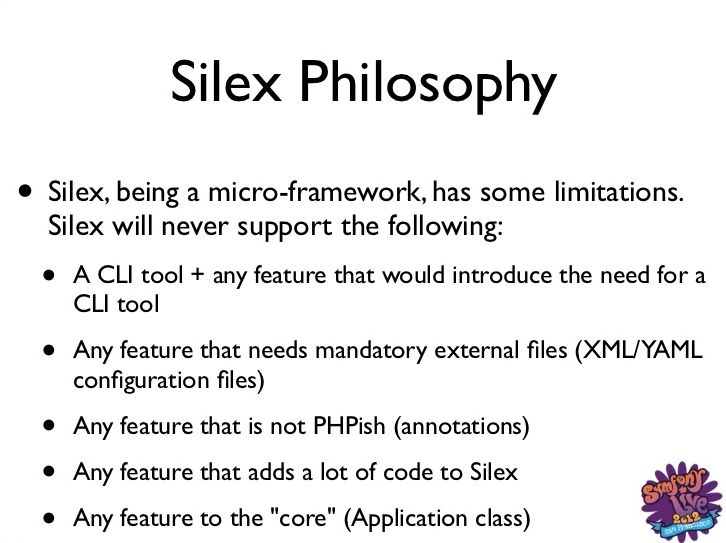 To conclude, Silex is good for smaller applications and for those, it can surely replace Symfony. Silex can also be used for larger projects (but for larger applications I would recommend to use full-stack framework instead, like Symfony).

Reference for slides at: http://www.slideshare.net/dustin.whittle/silex-from-micro-to-full-stack . If you feel like it, go ahead and read some more about the Silex framework.

Again, a few Pro for using Silex coming from people who actually use it: https://www.youtube.com/watch?v=OJcdHGJFfLU

Silex is good for small projects, but it can be used for big projects as well. What I like the most of Silex is that I have complete control over my project structure but it’s my responsibility if my project is well organized or not.
Also I recommend it over symfony if like me, you moved your application logic to the client side using a JS framework. For me it feels an overkill to use symfony only to serve a few json requests.

Silex is based on the independent Symfony2 components and isn’t truly considered a full-stack web application framework like Symfony is. You should only use it for very small projects that only require a few files, or you’ll outgrow it pretty quickly.

Silex is a great framework for small as well as big applications. Giving structure to the project is your responsibility in Silex. As the project becomes larger, you can nicely integrate symfony components into it although the documentation for the symfony provider is not so good especially for symfony security component.

In my case I needed speed right out of the box and silex provided me with the speed and although I am using most of the symfony components, it is a lot faster than symfony out of the box.

At the moment I write this, Silex is in maintenance mode and it’s end of life occured in June 2018.

Which means you shouldn’t use it anymore for new projects.

They recommend you to use Symfony 4 instead.

Silex was really good and fast (maybe faster than symfony 4 for simple requests/requirements), but SF4 may bring some new stack and benefits to our applications.

Update: However, in all of my attempts on migrating from Silex to Symfony 4, the simple services took 4x times more to respond no matter what I do. Silex seems to do a much better job for simple micro services.