I’ve always been told that I should use openssl_random_pseudo_bytes when giving passwords a salt.

But what I would really love to know, is what makes it cryptographically secure. What is the internal difference between rand, mt_rand and openssl_random_pseudo_bytes?

The differences are in short:

The properties are also listed in the table below: 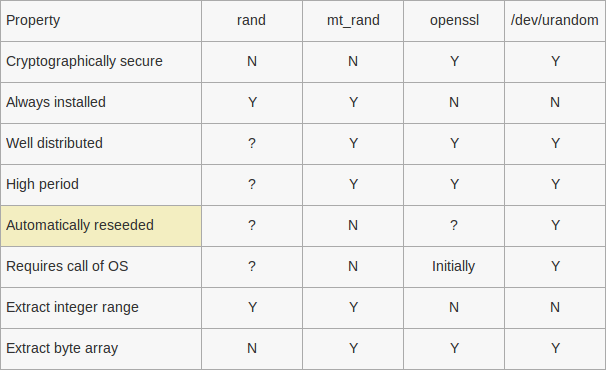 For rand it is stated in mt_rand:

Many random number generators of older libcs have dubious or unknown characteristics and are slow.

So for rand you’ll have to take a look at your libc to figure out which random is actually used. It’s stated on the Mersenne Twister site that it should have comparable speed nowadays, but it’s characteristics depends on the system. It doesn’t state how it is seeded either, meaning that you could use it for a game or such, but not for much else.

The Mersenne Twister is a well known algorithm that produces rather well distributed random numbers. It has a very long period, which means that it takes a long time before a previous state is encountered (if this happens it stays in loop, the size of the loop is called the period). MT is not secure because it is possible to reconstruct its secure state given enough data. This means that if you first generate a key, and then use the algorithm for something else, then an attacker may recreate the key given enough output. Furthermore, a non-secure seed as the system time is used upon creation.

OpenSSL’s random number generator is usually cryptographically secure (see note below); this means that it is not possible to re-calculate the internal state given the output of the generator.

OpenSSL’s pseudo random number generator is constructed using a hash function, currently MD5, which should still be secure for generating random numbers. It is well distributed and – like the MT algorithm – has a high period. OpenSSL’s rand is much slower than MT, but it should still get a rather good speed.

Warning: on the Wiki of OpenSSL it is stated that:

Which is reflected by the PHP function:

If passed into the function, this will hold a boolean value that determines if the algorithm used was “cryptographically strong”, e.g., safe for usage with GPG, passwords, etc. TRUE if it did, otherwise FALSE

This means it may still be insecure for e.g. long term keys.

Warning #2: additional insight shows that the PRNG of OpenSSL may not always be secure regardless of the return value. So additional care should be taken before choosing OpenSSL.