python – Merge rows based on value (pandas to excel – xlsxwriter)

I’m trying to output a Pandas dataframe into an excel file using xlsxwriter. However I’m trying to apply some rule-based formatting; specifically trying to merge cells that have the same value, but having trouble coming up with how to write the loop. (New to Python here!)

See below for output vs output expected:

(As you can see based off the image above I’m trying to merge cells under the Name column when they have the same values).

Here is what I have thus far:

Any help is greatly appreciated!

Your logic is almost correct, however i approached your problem through a slightly different approach:

1) Sort the column, make sure that all the values are grouped together.

3) Then we have to capture the rows where the value is new. For that purpose create a list and add the first row 1 because we will start for sure from there.

4) Then start iterating over the rows of that list and check some conditions:

4c) Finally i did not take into consideration if the column contains blank or null cells. In that case code needs to be adjusted.

Lastly code might look a bit confusing, you have to take in mind that the 1st row for pandas is 0 indexed (headers are separate) while for xlsxwriter headers are 0 indexed and the first row is indexed 1.

Here is a working example to achieve exactly what you want to do: 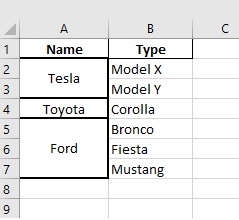 Previous article
excel – Where does my "error of compatibilty" comes from?
Next article
android – How do I give space in between text in textview?