Although I have no problem whatsoever understanding recursion, I can’t seem to wrap my head around the recursive solution to the Tower of Hanoi problem. Here is the code from Wikipedia:

I understand the base case and the concept of breaking the problem into smaller pieces until you are able to move a single disk. However, I can’t figure out how the two recursive calls in the non-base case work together. Perhaps someone can help me out? Thanks.

Actually, the section from where you took that code offers an explanation as well:

To move n discs from peg A to peg C:

It’s pretty clear that you first have to remove n − 1 discs to get access to the nth one. And that you have to move them first to another peg than where you want the full tower to appear.

The code in your post has three arguments, besides the number of discs: A source peg, a destination peg and a temporary peg on which discs can be stored in between (where every disc with size n − 1 fits).

a year ago i had i functional programming course and draw this illustration for the algorithm.
hope it helps!

There’s a good explanation of the recursive Hanoi implementation at http://www.cs.cmu.edu/~cburch/survey/recurse/hanoiimpl.html.

Summary is, if you want to move the bottom plate from stick A to stick B, you first have to move all the smaller plates on top of it from A to C. The second recursive call is then to move the plates you moved to C back onto B after your base case moved the single large plate from A to B.

I agree this one isn’t immediate when you first look at it, but it’s fairly simple when you get down to it.

Base case: your tower is of size 1. So you can do it in one move, from source directly to dest.

So with a simple case, you have a tower of height 2:

Next: move the bottom disc to the destination:

If you think about it, even if the tower were 3 or more, there will always be an empty extra peg, or a peg with all larger discs, for the recursion to use when swapping towers around.

Suppose we want to move a disc from A to C through B then:

If you repeat all the above steps, the disc will transfer.

I feel the pain!

Although this is an old post, I think what one really needs to understand, is not the “move this to that” approach but that the answer involves using the side-effect of the recursion.

A invaluable help to me was the “The Little Schemer” which teaches one to think and write recursive functions.

However, this teaches the reader to use the results of the returned result in the next recursive call.

The magic occurs in the succesive rearrangment of the function parameters.

Yes the problem is really in three parts:

However it is the displaying of the function parameters which is the solution to the problem and crucially understanding the double tree like structure of the calls.

The solution also conveys the power of proof by induction and a warm glow to all programmers who have wrestled with conventional control structures.

Incidently, to solve the problem by hand is quite satisfying.

Best done by always holding the top disc with the same hand and always moving that hand in the same direction.

The final number of moves for n discs is 2^n - 1 the move n disc to destination is halfway through the process.

Lastly, it is funny how explaining a problem to a colleague, your wife/husband or even the dog (even it they not listening) can cement enlightenment.

After reading all these explanations I thought I’d weigh in with the method my professor used to explain the Towers of Hanoi recursive solution. Here is the algorithm again with n representing the number of rings, and A, B, C representing the pegs. The first parameter of the function is the number of rings, second parameter represents the source peg, the third is the destination peg, and fourth is the spare peg.

I was taught in graduate school to never to be ashamed to think small. So, let’s look at this algorithm for n = 5. The question to ask yourself first is if I want to move the 5th ring from A to B, where are the other 4 rings? If the 5th ring occupies peg A and we want to move it to peg B, then the other 4 rings can only be on peg C. In the algorithm above the function Hanoi (n-1, A, C, B) is trying to move all those 4 other rings on to peg C, so ring 5 will be able to move from A to B. Following this algorithm we look at n = 4. If ring 4 will be moved from A to C, where are rings 3 and smaller? They can only be on peg B. Next, for n = 3, if ring 3 will be moved from A to B, where are rings 2 and 1? On peg C of course. If you continue to follow this pattern you can visualize what the recursive algorithm is doing. This approach differs from the novice’s approach in that it looks at the last disk first and the first disk last.

Think of it as a stack with the disks diameter being represented by integers (4,3,2,1)
The first recursion call will be called 3 times and thus filling the run-time stack as follows

After the first recursion ends, the contents of the run-time stack is popped to the middle pole from largest diameter to smallest (first in last out). Next, disk with diameter 4 is moved to the destination.

The second recursion call is the same as the first with the exception of moving the elements from the middle pole to destination.

It’s simple. Suppose you want to move from A to C

if there’s only one disk, just move it.

If there’s more than one disk, do

Keep in mind that, when moving the n-1 disks, the nth won’t be a problem at all (once it is bigger than all the others)

Note that moving the n-1 disks recurs on the same problem again, until n-1 = 1, in which case you’ll be on the first if (where you should just move it).

The answer for the question, how does the program know, that even is “src” to “aux”, and odd is “src” to “dst” for the opening move lies in the program. If you break down fist move with 4 discs, then this looks like this:

also the first move with 4 disc(even) goes from Src to Aux.

As some of our friends suggested, I removed previous two answers and I consolidate here.

This gives you the clear understanding.

What the general algorithm is….

Here goes the explanation. Look at the picture ->

By calling Movetower(3,a,b,c), you intend to move all the 3 discs from tower A to tower B. So the sequential calls are ->

We have n numbers of disks on source tower

Base case: n=1
If there is only one disk in source tower, move it to destination tower.

As a CS student, you might have heard about Mathematical induction.
The recursive solution of Tower of Hanoi works analogously – only different part is to really get not lost with B and C as were the full tower ends up.

In simple sense the idea is to fill another tower among the three defined towers in the same order of discs as present without a larger disc overlapping a small disc at any time during the procedure.

The algo is as follows:

The code is as follows in java:

Here is my solution code to Towers of Hanoi problem using recursion with golang. `package main

But of course the most efficient way to work out how many moves is to realise that the answers are always 1 less than 2^n. So the mathematical solution is 2^n – 1

Just saw this video today: Recursion ‘Super Power’ (in Python) – Computerphile and I think we should definitely have Professor Thorsten Altenkirch’s code in here as its a very beautiful and elegant piece of recursion code and its not always that we have a quality video to show in an answer.

our hanoi function has 4 parameters: 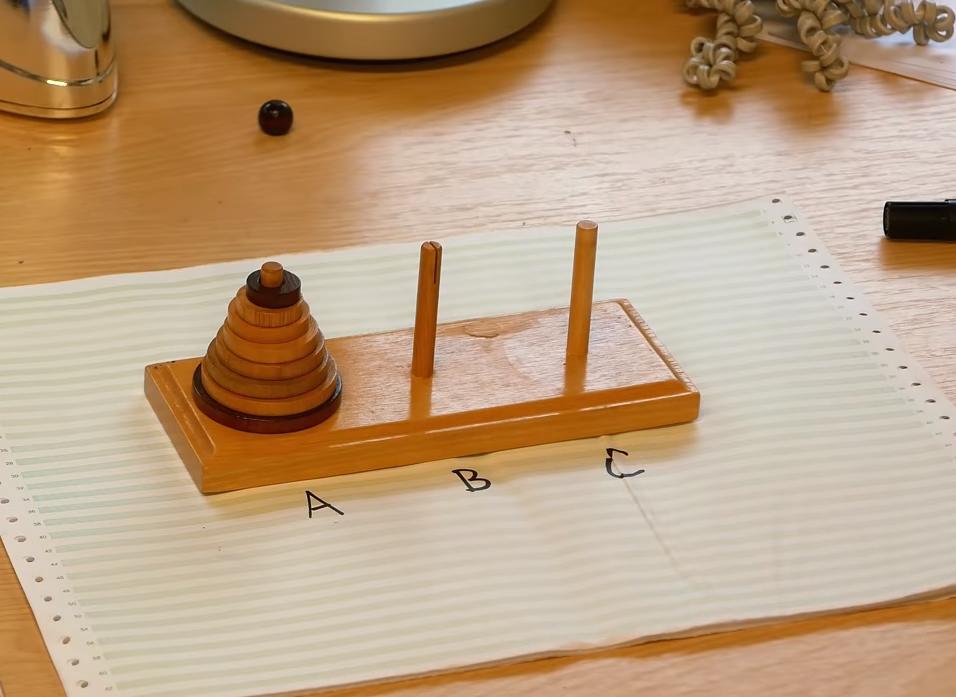 I am trying to get recursion too.

I found a way i think,

I have to figure out 2 things:

after the step what i need to get to the next node,abstract 1