Running a Haskell program on the Android OS

Forenote: This is an extension of the thread started on /r/haskell

Lets start with the facts:

Therefore, clearly, combining them would make Android development that much better. So essentially I would just like to know how I can write Haskell programs for the Android OS. My question is:

How can I get a Haskell program to execute/run on the Android OS?

How you do it is by first getting a Haskell compiler which can target C with the android NDK which comes with a GCC port for ARM architectures. JHC can trivially do this with a very small inf style file which describes the platform (word size, c-compiler, etc) I’ve done this with the Wii homebrew dev kit and it was quite easy. However jhc still has some stability issues with complex code such as using a monad transformer stack with IO but jhc has been improving a lot over the last 6 months. There is only one person working on JHC I just wished more people could help him.

Once you have Haskell compiler targeting NDK GCC, you will need to write bindings to either the android NDK JNI glue code framework (added since android 2.3) or you must write JNI glue code between Java-C-Haskell, the former option is the easier solution and if I remember correctly might actually be backwards compatible with previous versions of Android below 2.3.

The biggest hurdle isn’t so much of getting a Haskell compiler for android (which is still a big hurdle) the biggest problem is that some one needs to write binding APIs for NDK libraries which is a huge task and the situation is worse if you need to write android UI code because there are no NDK APIs for this part of the android SDK. If you want to do android UI code in Haskell somebody will have to write Haskell bindings to Java through JNI/C. Unless there is a more automated process to writing binding libraries (I know there are some, they are just not automated enough for me) then chances of some one doing it are quite low.

L01man: Is there a tutorial about how to do this? For the
first part, I understand I have to download JHC. What do I have to
write in the inf file and how to use it?

Please note before I answer this question I haven’t used jhc for quite sometime since I originally wrote this and newer versions have been released since so I do not know how stable jhc currently is when it comes to code generation of more complex Haskell programs. This is a warning to anyone before you consider making a large Haskell program with JHC, you should do some small tests before you go full on.

L01man: The second part is an alternative to the first. I don’t know how to do what you said in the
third.

Before you begin you should have some knowledge of C and be comfortable with using the Haskell foreign function interface (FFI) and tools such as hs2c. You should also be familiar with using the Android NDK and building .apk with shared libraries. You will need to know these to interface between C-Haskell, Java/C-Haskell and develop Haskell programs for Android that you can officially distribute/sell on the market store.

L01man: I understand that its goal is to create a binding for the
Android API. But… does the 4th part says we can’t make .apk with
Haskell?

.apk is just an app package file format and is built with the tools that come with the Android SDK (not NDK), this has very little to do building the binaries itself. Android packages can contain native shared libraries, this what your Haskell program will be and the native shared/static libraries are generated via the Android NDK.

A language that has recently come to my attention is Eta.

Eta’s compiler is a fork of GHC 7.10 which has a JVM backend. It is possible to use the generated JAR files to write Android apps and even use its Foreign Function Interface to call native Android Java libraries.

Brian McKenna has written a blog post about how to configure an Android Studio project to use an Eta library. 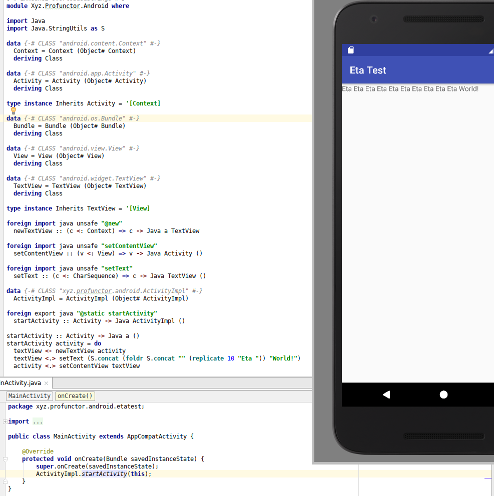 I once came across the same Reddit thread, but it was old, and comments were closed. I sent a message to the OP, but am not sure whether it reached the recipient. My suggestion here (may work for older Androids where native activities were not possible).

I (developed in Haskell some time ago, but currently switched to Smalltalk) am currently developing a port of Squeak VM to Android. The way I am doing this is similar to what might be dealt with in a haskell-on-android project: a lump of C code which needs to be called from Java part of the application (basically all that can be done in Android is to handle various events; an application cannot poll for events itself and does not have any event loop). In my case the code is generated by the Squeak VM building tools, in the case of haskell on android this will be output from GHC of JHC or whatever front end used. This repo may be worth looking at:

Under “src” there is the Java code which provides for user events interception and sending them to the native code (see the CogView class). The C code of the VM itself is not completely there (see squeakvm.org, the Cog branch for that), but one may get the idea. One also might look under http://gitorious.org/~golubovsky/cogvm/dmg-blessed/trees/master/platforms/android/vm which is the C frontend to the interpreter (including user events handling, some timekeeping, etc.)

There is https://github.com/conscell/hugs-android a port of HUGS Haskell interpreter to Android.

I think the general answer should come from source->source transformations, since loading specially compiled shared objects seems to be a bit of a kludge (involving ghc->c and a c->java step in the answers above). This question thus falls under the heading of Haskell on the JVM, which has been tried (with one step as a Java intermediate representation) and discussed at length. You could use frege if the libraries you need compile there. The only remaining steps would be the beginnings of the Android framework API translated into IO() actions and maybe a wrapper for building the manifest xml and apk.