I’m following the instruction about using gcm here http://developer.android.com/guide/google/gcm/gs.html, and I’m stuck at the following step:

Install the Helper Libraries
To perform the steps described in the following sections, you must first install the helper libraries (reference: client and server). From the SDK Manager, install Extras > Google Cloud Messaging for Android Library. This creates a gcm directory under YOUR_SDK_ROOT/extras/google/ containing these subdirectories: gcm-client, gcm-demo-appengine, gcm-demo-client, gcm-demo-server, and gcm-server.

In my SDK manager, I can’t find the option: Google Cloud Messaging for Android Library, as I captured in this screenshot 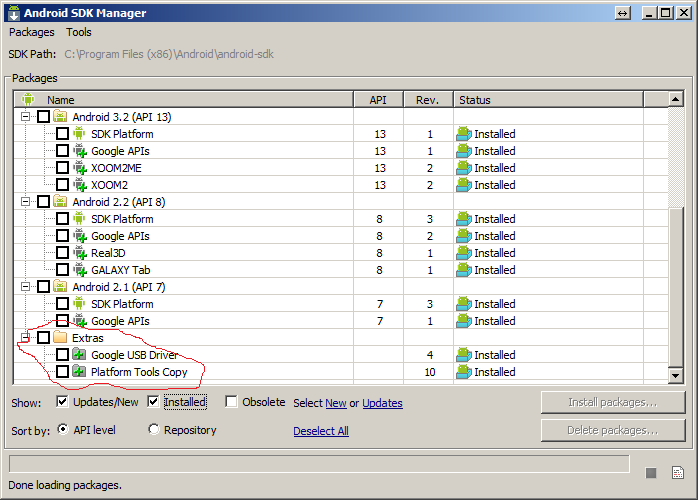 , what I should do to resolve this? Thanks

I had this same issue. You must update EVERYTHING else in the Eclipse plug-in before GCM will show up. Force an update from the sdk manager and it will show up once the version is current.

Use the Android SDK Manager to update your SDK to r20, after which you’ll also need to update your Eclipse plugin. You’ll then find the Google Cloud Messaging for Android Library under Extras in the SDK manager, along with everything else. Just select what you want to install.

And if following error comes :- android sdk manager nothing was installed