spreadsheet – How to get excel to display a certain number of significant figures?

I am using excel and i want to display a value to a certain number of significant figures.

I tried using the following equation

with value replaced by the number I am using and sigfigs replaced with the number of significant figures I want.

This formula works sometimes, but other times it doesn’t.

How do I get excel to set the number of sig figs for me so I don’t have to figure it out manually?

The formula (A2 contains the value and B2 sigfigs)

may give you the number you want, say, in C2. But if the last digit is zero, then it will not be shown with a General format. You have then to apply a number format specific for that combination (value,sigfigs), and that is via VBA. The following should work. You have to pass three parameters (val,sigd,trg), trg is the target cell to format, where you already have the number you want.

If you don’t mind having a string instead of a number, then you can get the format string (in, say, D2) as

(this replicates the VBA code) and then use (in, say, E2)

where cell C2 still has the formula above. You may use cell E2 for visualization purposes, and the number obtained in C2 for other math, if needed.

I was also looking to work with significant figures and I was unable to use VBA as the spreadsheets can’t support them. I went to this question/answer and many other sites but all the answers don’t seem to deal with all numbers all the time. I was interested in the accepted answer and it got close but as soon as my numbers were < 0.1 I got a #value! error. I’m sure I could have fixed it but I was already down a path and just pressed on.

I needed to report a variable number of significant figures in positive and negative mode with numbers from 10^-5 to 10^5. Also, according to the client (and to purple math), if a value of 100 was supplied and was accurate to +/- 1 and we wish to present with 3 sig figs the answer should be ‘100.’ so I included that as well.

My solution is for an excel formula that returns the text value with required significant figures for positive and negative numbers.

It’s long, but appears to generate the correct results according to my testing (outlined below) regardless of number and significant figures requested. I’m sure it can be simplified but that isn’t currently in scope. If anyone wants to suggest a simplification, please leave me a comment!

Note: I have a named range called “sigfigs” and my numbers start in cell A1

I’ve tested it against the wikipedia list of examples and my own examples so far in positive and negative. I’ve also tested with a few values that gave me issues early on and all seem to produce the correct results. 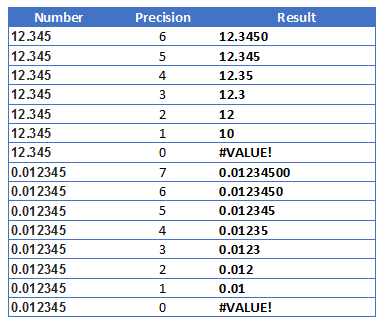 I’ve also tested with a few values that gave me issues early on and all seem to produce the correct results now.

To Treat Negative Numbers, I have included a concatenation with a negative sign if less than 0 and use the absolute value for all other work.

Method of construction:
It was initially divided into about 6 columns in excel that performed the various steps and at the end I merged all of the steps into one formula above.

This is an old question, but I’ve modified sancho.s’ VBA code so that it’s a function that takes two arguments: 1) the number you want to display with appropriate sig figs (val), and 2) the number of sig figs (sigd). You can save this as an add-in function in excel for use as a normal function:

It seems to work in all the use cases I’ve tried so far.

Rounding to significant digits is one thing… addressed above. Formatting to a specific number of digits is another… and I’ll post it here for those of you trying to do what I was and ended up here (as I will likely do again in the future)…

Be sure these are in this order and check all of the “Stop If True” boxes.

As a very simple display measure, without having to use the rounding function, you can simply change the format of the number and remove 3 significant figures by adding a decimal point after the number.

. would show the numbers in thousands. #,

.. shows the numbers in millions.

You could try custom formatting instead.

value :: The number you wish to round.

sigfigs :: The number of significant figures you want to round to.

The formula is valid for E+/-999, if you have a number beyond this increase the number of the last three zeros, and change the second 4 to the number of zeros +1.

Note that the values displayed are rounded to the significant figures, and should by used for display/output only. If you are doing further calcs, use the original value in A1 to avoid propagating minor errors.