This is probably a pretty easy to answer question, but I can’t find the solution myself after a couple hours of searching the documentation and Google. I set the orientation of my Android app to landscape in the AndroidManifest.xml file:

However, when I run the app in the simulator, it appears sideways and in portrait mode. How can I switch the emulator to landscape mode on a mac? It’s running the 1.6 SDK.

For Mac users, you only need to use the fn key if the setting “Use all F1, F2 etc. keys as function keys” (under System Preferences -> Keyboard) is checked.

Not sure about your question – “sideways” is the same as “landscape”.

If you mean how to switch during runtime:

Just use 9 in numeric keyboard with num-lock off. 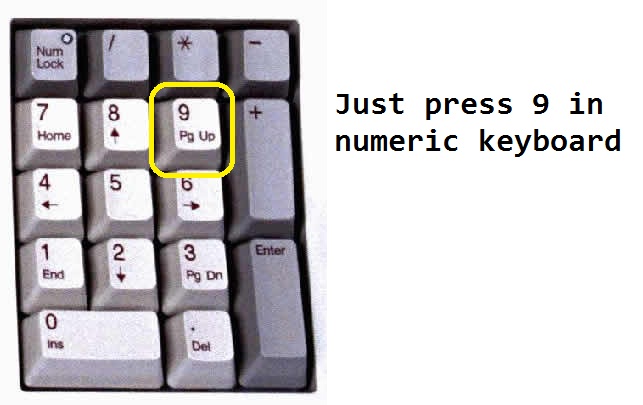 7 rotates in the opposite direction.

On iMac with long keyboard (keyboard with numeric keypad at the right):

I’m using Android Studio and none of the suggestions worked. I can turn the emulator but it stays in portrait. I didn’t want to add a command in the manifest forcing landscape. The fix for me was:

I have found that sometimes the CTRL + F11 combination just doesn’t do it for me.
I have solved it by disabling the keyboard input in the emulator settings.

To do that, go to your emulator settings, klick the “show advanced settings” button and scroll all the way down. Then, disable the “enable keyboard input” option.

After doing that, try to start your emulator again, and the CTRL + F11 combination should work. 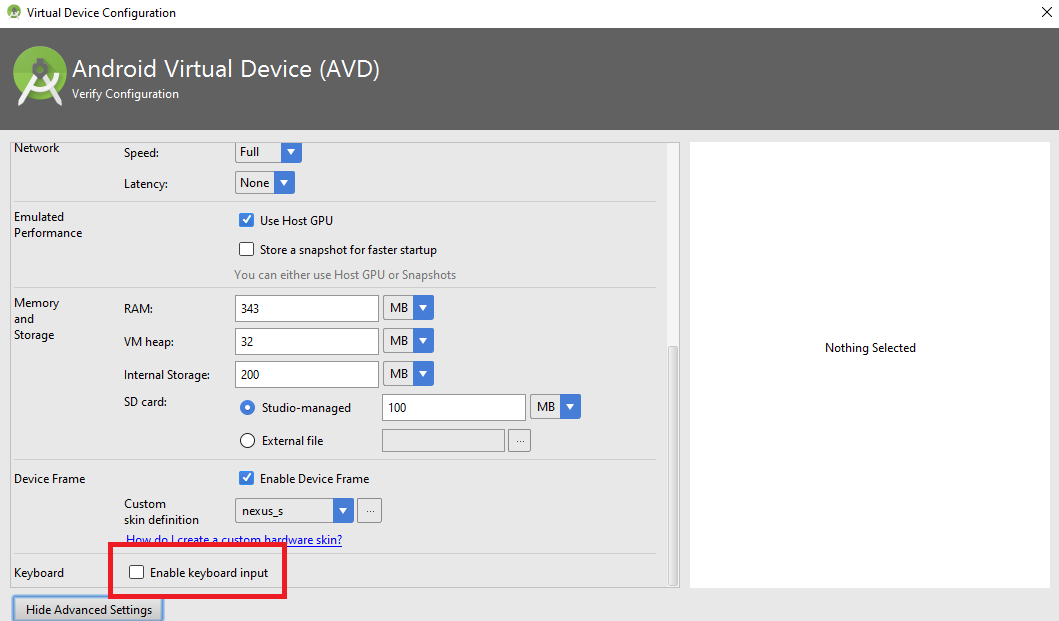 Just a little bug (Bug for me) I found on mac emulator.

On changing the orientation to landscape (CtrlCmdF11) it changes to landscape but content shows in portrait format.for that:

Go to emulator: Settings-> Display->When device is rotated->Rotate the contents of the screen

The complete listing is buried in the android docs, and i only found it via google / dogpile.

That link has the emulator shortcut keys as of right now.

This is now much more intuitive. The AVD interface now includes a sidebar with various functional shortcuts. The buttons circled in blue will rotate the device clockwise and counterclockwise on the screen. 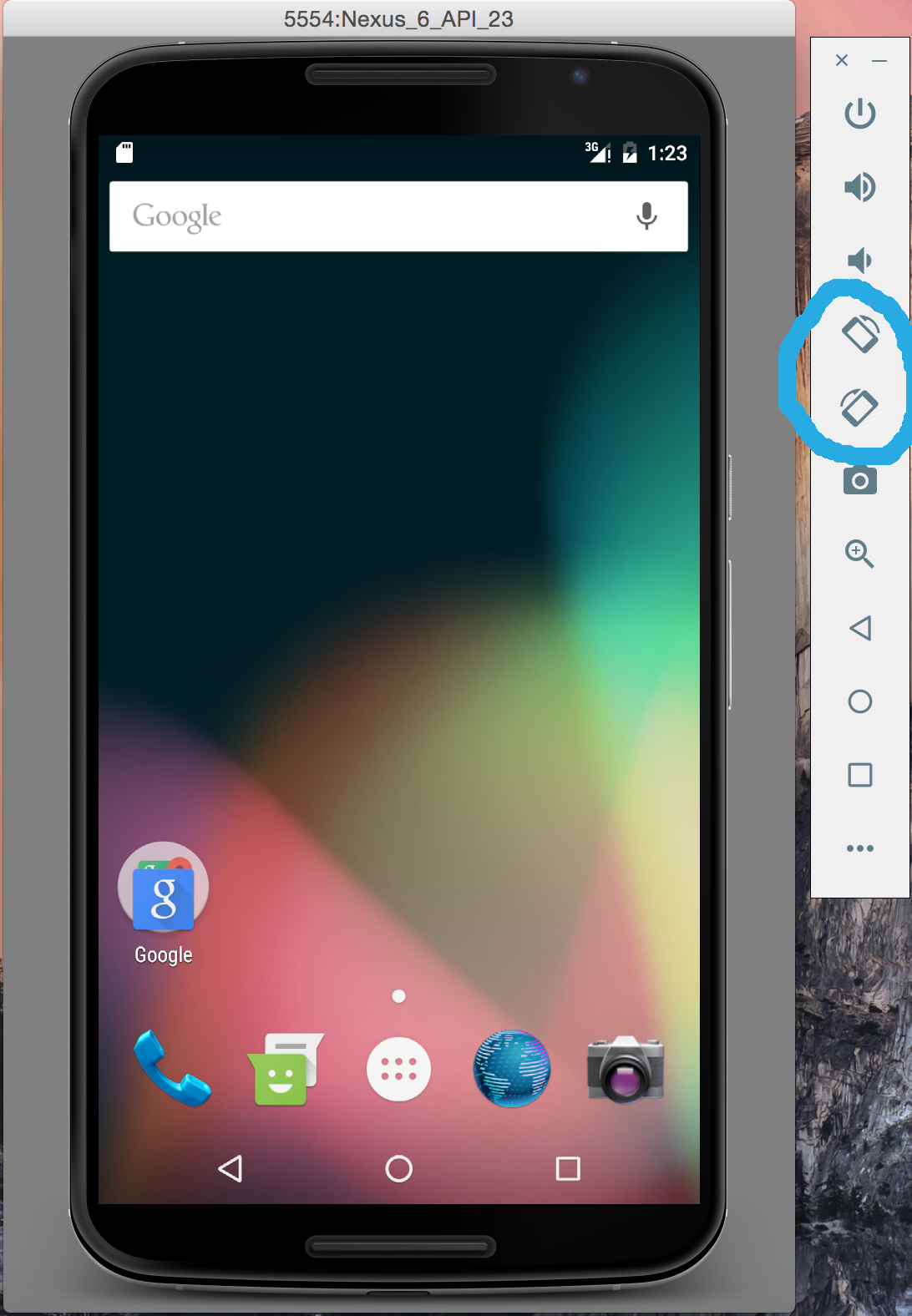 To rotate the Android Emulator, just disable the Num Lock key and and use the 7 and the 9 in the num pad to rotate the emulator and change its layout from portrait to landscape.

control+fn+F11 will do. There’s no need for “command” key

-launch the emulator
-install your app
-launch your app
-make sure that your Num lock is on
-Press ‘7’ &’9′ from your num pad to change your orientation landscape to portrait & portrait to landscape.

In my case, i succeeded by doing this:

1- enable ‘Auto-Rotate’, if it isn´t yet.
2- either use rotation left-right option at panel located next to the virtual device, or click (ctrl + left/right arrow key), in order to rotate the device.

Hope it works for you.

10 years later, I run into the same problem… For me, the issue is that it was literally disabled in my emulator.

Go to the running emulator, and drag down from the top menu area to make it show the action buttons and notifications. Those action buttons show what features are enabled/disabled, like Wifi, airplane mode, and….rotate.

In my emulator, the 3rd button from the left was the “rotate” button, and it was gray. Once I tapped on it to toggle it on, boom, my app would now switch to landscape mode when I rotated it.

For those of you with a Chromebook Pixel/Ubuntu/Crouton with no numpad, installing the onboard keyboard worked for me.

Just press 123 to access the numpad layout, and then press 7

If you’re on Unity already, onboard may already be installed, so just type onboard from your command line to see if it’s there.

If not, just type:

PS: The Chromebook Pixel’s upper keys were supposed to represent the traditional F1 through F11 function keys on Ubuntu/Crouton, so you may want to try those special hardware keys first (on their own or in combination with Ctrl). It’s just that for me, I’m running an old copy of Crouton, and the only function key that seems to be recognized is F6

If you can not switch to landscape(or portrait) while using ctr+f11/12
Maybe the virtual device (android phone) itself lock the rotation.
Going to the android control center (pull down on the home page), and unlock.

To switch to Landscape mode in android emulator u have 2 ways to accomplish.

Previous article
android – getting exception "IllegalStateException: Can not perform this action after onSaveInstanceState"
Next article
Can't Find Theme.AppCompat.Light for New Android ActionBar Support