I have the following XCTest UI test that types text into a text view.

When run as an Xcode bot it shows the following error for the typeText call.

Interestingly, when I run it manually from the Xcode on the same computer the test passes. This test also passed in Xcode bot before upgrade to Xcode 7.1 / iOS 9.1. What can be the source of the problem?

Here is an isolated demo with the UI test:
https://github.com/exchangegroup/UITestTextViewDemo

I found a solution for my case and I hope it helps you as well.

In my setUp() and tearDown() (seems redundant I know) I put XCUIApplication().terminate(). This is ensuring that the app is terminated before running the next test and it seems to be doing the job.

I filed a bug with Apple but for the time being this is getting me around the error that you were seeing. Hope that helps!

I believe the underlying issue is that “Connect Hardware Keyboard” is turned on by default. Even if you turn it off for the main user, the _xcsbuildd user still uses the default. I was able to solve the problem by adding a pre test action to the scheme with the following script: 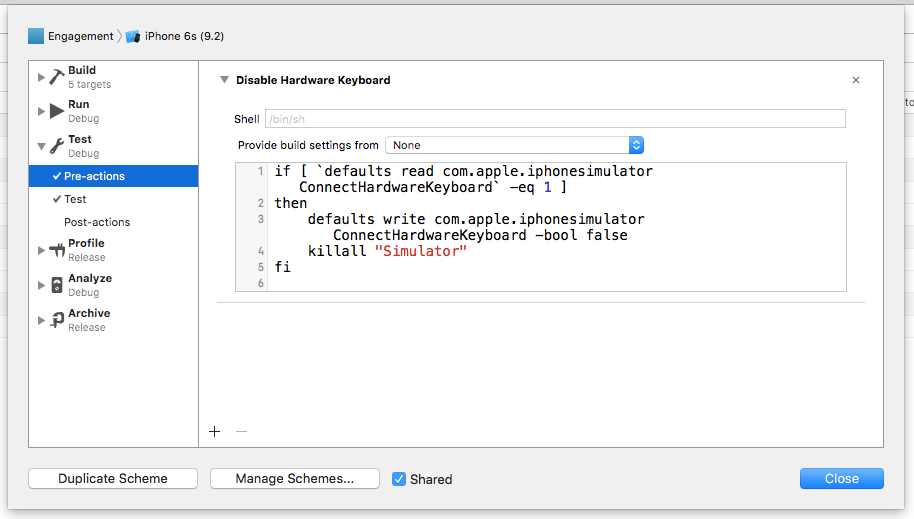 I found out another solution, since the one proposed by Konnor wasn’t working for me: I was having a lot of problems using UITest on Xcode Bot, and the common symptom was that testing on simulator took a lot more time than on the local machine, so I thought that the _xcsbuildd user used to run the tests was in some way slowed down.

My solution is simple: just promote _xcsbuildd user to be a “normal” user. This has another advantage: if you want you can login with that user and see the tests run in the simulator during integration, so it is easier to debug!

Here is how I did it:

I was not able to make the user show up in the fast login window, anyway you should see a “other user” where you can insert the username “_xcsbuildd” and the password you chose

I ran into this issue as well. I have written a UI test to capture screenshots with Snapshot (fastlane) and it runs fine on an iPad Air & Pro simulator. However, on an iPad Retina or iPad 2 simulator I get this error message, either running from command line or directly from Xcode.

A solution in my case was to add some sleep() functions between the typeText() statements and the error went away.

Edit: this only fixes running manually from Xcode, through command line it still causes a test failure. I also noticed that it works on all simulators for 64-bit devices, but not on earlier devices.

Other than connect hardware keyboard, none of these things really worked for me. What did work was turning off the Mac’s screen saver and display sleep in system settings. My suspicion is the simulator performs oddly when the Mac is locked or doesn’t have a monitor to draw to.

With those two settings off, I still get a few random UI test failures. Connecting hardware monitors or screen sharing so the simulator is drawn on screen somewhere seems to resolve those though.

I am using xcode 8.2.1 and running tests on ios 9.3 versions. One simple hack is to add a sleep for 2-5 secs after tapping on the text box and before typing on it. Though, this is not a permanent solution.

Unselect all keyboard preferences in settings before running the tests.

Questions: Looking for a way to use Swift extensions in a separate file or an alternative solution. Creating an extension only works as long as the extension is written in the same file it is being us...

Not able to set Interactive Push Notifications on iOS8

Questions: I was already able to set Interactive LOCAL notifications, but the Remote notifications aren’t working. I’m using Parse.com to send the JSON My AppDelegate.Swift looks like this...