unit testing – How can I create tests in Android Studio?

Just downloaded Android Studio which is based off of the Intellij Idea.

How would one create tests?

I notice there is a option for create a Test Module but this doesn’t seem to do anything, only create a new project with src

I also tried pressing the hot key CTRL+AlT+T which allows to create unit tests on an existing class but it seems to want to place it in the current project. Of course this doesn’t help with TDD

Does anyone have any experience here ?

This answer is for people who are just getting started with Android testing. I will provide two simple examples to help you see how testing works. If you follow along for the next 10 minutes, you will be all set up to start adding your tests to your own app. I think you’ll be surprised how easy it is. I certainly was.

There are two different types of tests that you will do.

Create a new project and you will see the following default folders.

Everything is already there and waiting for you to create your tests. It’s all set up already!

How to create local unit tests

Open the ExampleUnitTest file shown in the image above. it should look something like this:

It should pass (as long as 2 + 2 is still 4 when you are reading this answer). Congratulations, you just ran your first test!

Making your own test

Let’s write our own test. First add this class to your main app project so that we have something to test:

Now change the addition_isCorrect() method in the test class to be like the following code (or just add another method with a different name):

Run it again and you should see it pass. Congratulations, you just created your own first test! (Well, I guess technically it was mine, but, hey, close enough. What’s mine is yours.)

How to create instrumented tests

Open the ExampleInstrumentedTest file. it should look something like this:

Press one of those green buttons again.

As long as you have a real device connected or the emulator set up, it should have started it up and run your app. Congratulations, you just ran your first instrumented test!

Making your own test

The instrumented tests use Espresso to run the tests. It is kind of like your own little robot user that you can have test your app. You can tell it to do something like pressing a button or reading the properties of a TextView.

You can write the instructions for how to do the test by hand, but since we are just starting out, let’s use the auto-record function. It’s super simple.

First add a button to your UI so that we have something to work with. I did this:

Then press Run > Record Espresso Test in the menu.

After it starts, click the button in the emulator and then to finish choose OK on the Record dialog. It should auto generate the following test code.

Great! You just created you first instrumented test! That was super easy. You should probably add an assertion to make it a real test, but that that is pretty easy to do with the recorder, too. Watch this video to go a little deeper.

I’d watch the videos first and then read through the documentation. It is all pretty helpful. The last link is to a series of articles that cover some important things to think about when choosing what to test.

Following the Android Gradle Plugin User Guide I was able to get tests working on the command line by performing the following steps on a newly created project (I used the default ‘com.example.myapplication’ package):

This ran my tests and placed the test results in MyApplicationProject/MyApplication/build/reports/instrumentTests/connected. I’m new to testing Android apps, but it seem to work fine.

From within the IDE, it’s possible to try and run the same test class. You’ll need to

However this fails (the classpath used when running the tests is missing the test output directory). However, I’m not sure that this would work regardless as it’s my understanding that an Android specific test runner is required.

I would suggest to use gradle.build file.

I think this post by Rex St John is very useful for unit testing with android studio.

Highlight the code context you want to test, and use the hotkey: CTRL+SHIFT+T

Use the dialog interface to complete your setup.

The testing framework is supposed to mirror your project package layout for best results, but you can manually create custom tests, provided you have the correct directory and build settings.

As of now (studio 0.61) maintaining proper project structure is enough.
No need to create separate test project as in eclipse (see below). 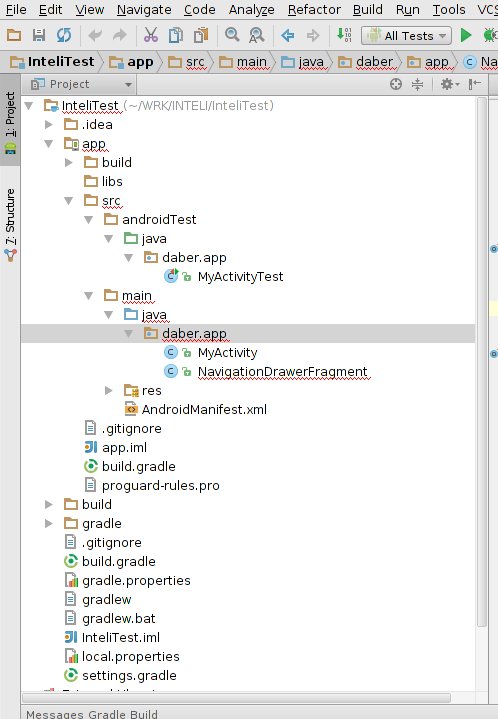 Android Studio keeps evolving so the responses above will eventually be no longer applicable. For the current version of Android Studio 1.2.1.1, there’s a nice tutorial on testing at:

One of the major changes it seems is that with Android Studio the test application is integrated into the application project.

I’m not sure if this helps your specific problem, but I found a guide on making tests with a Gradle project.
Android Gradle user Guide

The easiest way I found is the streamlined in my following blog post:

Android Studio has been kind of a moving target, first being a developer preview and now being in beta.
The path for the Test classes in the project has changed during time, but no matter what version of AS you are using, the path is declared in your .iml file. Currently, with version 0.8.3, you’ll find the following inside the inner iml file:

The .iml file is telling you where to place your test classes.

Add below lib inside gradle file

Create class HomeActivityTest inside androidTest directory and before running the test add flurry_api_key and sender_id string inside string resource file and change the value for failure and success case.