I’m using the Power Commands extension with Visual Studio 2012. I have the option checked to remove and sort usings on save. The problem is that the System.Xxx directives are being sorted last, and that’s causing a style analysis error:

This worked correctly (System.Xxx first) with VS 2010. Anyone know how to correct this?

Note: Even if it didn’t cause an SA error, I’d still prefer the system directives to be first.

Then change the following setting: 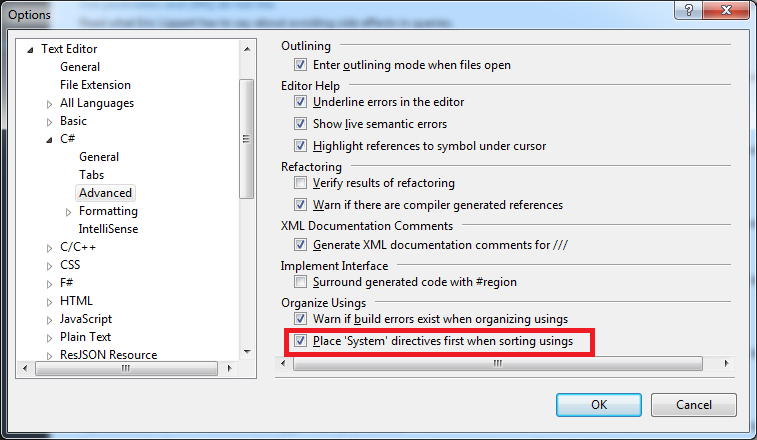 It’s an annoying default setting, I have no idea why Microsoft chose that, it goes against all previous standards that I’ve ever seen.

EDIT:
Thanks to Oskar we have a reason:

The reason for the change in default behavior is due to the fact that
Windows App Store applications prefer to have ‘Windows.‘ at the top
of the file rather than ‘System.‘

.net – How to correctly read the method signature of the .Any function in C#

Questions: I really enjoy using the aggregate functions that C# provides such as .Any(), but I struggle to understand what my options are just looking from the method signature: Can someone help me be...

c# – i need help to upload a image in datagridview

Previous article
'Symbol' is undefined in IE after using babel
Next article
WPF MVVM: How to close a window