I have a small excel file that is launched by a scheduling app every 15 minutes.

Functions in the excel cells read data from various places on the network and stores it in cells in this excel file. That all works perfectly.

VBA code then saves the file and does an Application.Quit.

In the previous version of excel, it worked great. Since upgrading to 2016, Application.Quit closes the “excel interface” but Task manager shows a hundred “Excel.exe”‘s still sitting there using up 40MB of memory each.

The attached picture shows only five excel.exe’s in Task Manager since the computer had only been running less than two hours at this point. But after 24 hours there are about 100 of them. So the computer crashes within a few days. 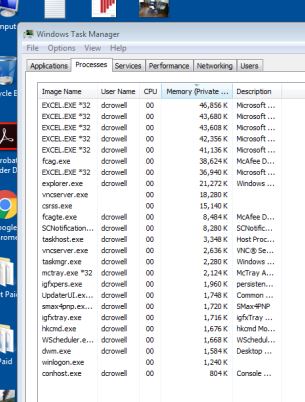 Thanks for the speedy assistance. I’m not sure if I’m supposed to put my responses here by editing my original question.

Here is the code. The actual updating of cell values is performed in the cells themselves. There is an Add In that reads values from some PLCs in our factory. That all works fine.

When the excel file it launched, it updates and closes. This has worked for many years until we upgraded to 2016. Application.Quit would make excel go away completely. Not now.

Before Excel 2016, Excel had the possibilities to have multiple Excel files in a single window.

In Excel 2016, it is one window per application.

This is code I use every time I want to quit Excel. Usually I have 2 books open, one is a template (which I don’t save) and the other is one that was created with data from the template.

Basically, you need to hold onto your workbook objects. Then after closing them, set the workbooks to Nothing before calling quit or the workbook won’t be garbage collected and keep the EXCEL.EXE instance open. There may be objects other than workbooks that can keep excel open too. Just be aware of these other objects and clean up before you quit. I tell my kids that all the time, but they never listen. Honestly I think it’s silly that Application.Quit doesn’t clean up after itself, but c’est la vie.