vba – How to breakdown text with a non-uniform delimiter?

I have this data in Excel:

But one of my clients needs it summarize per item in detail.
So above data needs to be converted to: 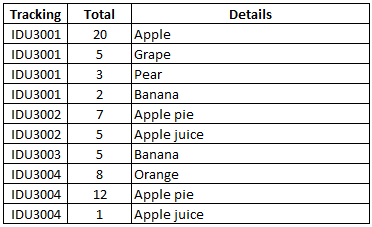 This way, client can analyze it per tracking and per item.
The text format is not really uniform since it is entered manually.
Some users use Alt+Enter to separate items. Some uses space and some doesn’t bother separating at all. What’s consistent though is that they put hyphen(-) after the item then the count (although not always followed by the number, there can be spaces in between). Also if the count of that item is one(1), they don’t bother putting it at all (as seen on the tracking IDU3004 for Apple Juice).

The only function I tried is the Split function which brings me closer to what I want.
But I am still having a hard time separating the individual array elements into what I expect.
So for example, IDU3001 in above after using Split (with “-” as delimiter) will be:

Of course I can come up with a function to deal with each of the elements to extract numbers and items.
Actually I was thinking of using just that function and skip the Split altogether.
I was just curious that maybe there is another way out there since I am not well versed in Text manipulation.
I would appreciate any idea that would point me to a possible better solution.

Here’s a demo based on your sample data.