What are the differences in die() and exit() in PHP?

What are the differences between die() and exit() functions in PHP?

I think both have the same functionality, but I doubt there is something different in both… what is it?

There’s no difference – they are the same.

Note: This language construct is equivalent to die().

This language construct is equivalent to exit().

The difference between die() and exit() in PHP is their origin.

die() and exit() are equivalent functions.

This language construct is equivalent to exit().

Note: This language construct is equivalent to die().

die is an alias for master function exit()

DIFFERENT IN OTHER LANGUAGES

die() and exit() are different in other languages but in PHP they are identical.

From Yet another PHP rant:

…As a C and Perl coder, I was ready to answer, “Why, exit() just bails
off the program with a numeric exit status, while die() prints out the
error message to stderr and exits with EXIT_FAILURE status.” But then
I remembered we’re in messy-syntax-land of PHP.

The designers obviously thought “Hmm, let’s borrow exit() from C. And Perl
folks probably will like it if we take die() as is from Perl too.
Oops! We have two exit functions now! Let’s make it so that they both
can take a string or integer as an argument and make them identical!”

The end result is that this didn’t really make things any “easier”,
just more confusing. C and Perl coders will continue to use exit() to
toss an integer exit value only, and die() to toss an error message
and exit with a failure. Newbies and PHP-as-a-first-language people
will probably wonder “umm, two exit functions, which one should I
use?” The manual doesn’t explain why there’s exit() and die().

In general, PHP has a lot of weird redundancy like this – it tries to
be friendly to people who come from different language backgrounds,
but while doing so, it creates confusing redundancy.

As stated before, these two commands produce the same parser token.

There is a small difference, and that is how long it takes the parser to return the token.

I doubt it will be measurable unless you have a “perfect” environment dedicated to parsing PHP, and a lot of requests with different parameters.
But there must be a difference, after all, PHP is an interpreted language.

You can even do die; the same way as exit; – with or without parens.

The only advantage of choosing die() over exit(), might be the time you spare on typing an extra letter 😉

As all the other correct answers says, die and exit are identical/aliases.

Although I have a personal convention that when I want to end the execution of a script when it is expected and desired, I use exit;. And when I need to end the execution due to some problems (couldn’t connect to db, can’t write to file etc.), I use die("Something went wrong."); to “kill” the script.

When I use exit:

When I use die:

This way, when I see exit at some point in my code, I know that at this point I want to exit because the logic ends here.
When I see die, I know that I’d like to continue execution, but I can’t or shouldn’t due to error in previous execution.

Of course this only works when working on a project alone. When there is more people nobody will prevent them to use die or exit where it does not fit my conventions…

Here is something that’s pretty interesting. Although exit() and die() are equivalent, die() closes the connection. exit() doesn’t close the connection.

Just incase in need to take this into account for your project.

This page says die is an alies of exit, so they are identical. But also explains that:

there are functions which changed names because of an API cleanup or some other reason and the old names are only kept as aliases for backward compatibility. It is usually a bad idea to use these kind of aliases, as they may be bound to obsolescence or renaming, which will lead to unportable script.

So, call me paranoid, but there may be no dieing in the future.

This output from https://3v4l.org demonstrates that die and exit are functionally identical. 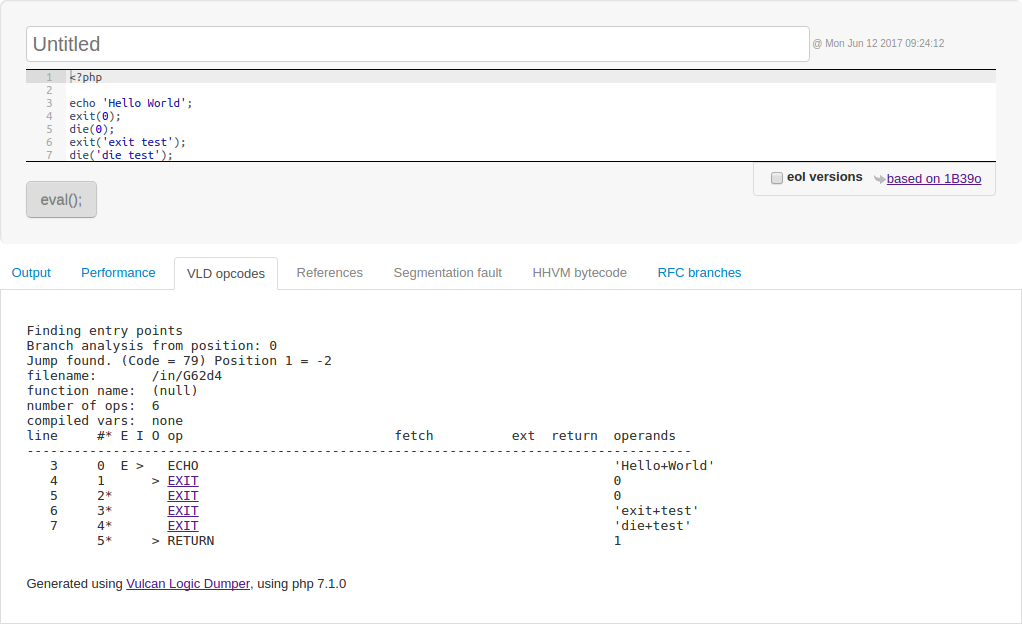 Functionality-wise they are identical but I use them in the following scenarios to make code readable:

Use die() when there is an error and have to stop the execution.

Use exit() when there is not an error and have to stop the execution.

They are essentially the same, though this article suggest otherwise.

Functionally, they are identical. So to choose which one to use is totally a personal preference. Semantically in English, they are different. Die sounds negative. When I have a function which returns JSON data to the client and terminate the program, it can be awful if I call this function jsonDie(), and it is more appropriate to call it jsonExit(). For that reason, I always use exit instead of die.

From what I know when I look at this question here

It said there that “in PHP, there is a distinct difference in Header output. In the examples below I chose to use a different header but for sake of showing the difference between exit() and die() that doesn’t matter”, and tested (personally)

In w3schools Quiz:
The die() and exit() functions do the exact same thing?
my answer is false. That is incorrect answer.
The right answer is true.

Here is the screenshot:

Something I have noticed in my scripts at least is that exit() will stop the currently executing script and pass control back to any calling script, while die will stop php in its tracks. I would say that is quite a big difference?

The result of exit() function and die() function is allways same. But as explained in alias manual page (http://php.net/manual/en/aliases.php), it says that die() function calls exit function. I think it is hard coded like below:

But very most of people don’t thinks this is a problem, because if you have that much processes, you must think more problem than if a function is master or alias.

But, exact answer is that; allways master function is more faster than alias.

Finally; Alias manual page says that, you may no longer use die. It is only an alias, and it is deprecated.

It is usually a bad idea to use these kind of aliases, as they may be
bound to obsolescence or renaming, which will lead to unportable
script. This list is provided to help those who want to upgrade their
old scripts to newer syntax.

They sound about the same, however, the exit() also allows you to set the exit code of your PHP script.

Usually you don’t really need this, but when writing console PHP scripts, you might want to check with for example Bash if the script completed everything in the right way.

Then you can use exit() and catch that later on.
Die() however doesn’t support that.

Die() always exists with code 0.
So essentially a die() command does the following:

Which is the same as:

Previous article
javascript – "Cross origin requests are only supported for HTTP." error when loading a local file
Next article
jquery – How to set a lock to a continue using a web page after a period of inactivity?