What does the 'static' keyword do in a class?

To be specific, I was trying this code:

But it gave the error

So I changed the declaration of clock to this:

And it worked. What does it mean to put that keyword before the declaration? What exactly will it do and/or restrict in terms of what can be done to that object?

static members belong to the class instead of a specific instance.

It means that only one instance of a static field exists[1] even if you create a million instances of the class or you don’t create any. It will be shared by all instances.

Side note: Of course, static members can access instance members through an object reference.

[1]: Depending on the runtime characteristics, it can be one per ClassLoader or AppDomain or thread, but that is beside the point.
Questions:
Answers:

Unless you needed “clock” somewhere outside of main, this would work just as well:

Java unfortunately allows you to access static members as if they were instance members, e.g.

That makes it look as if sleep is an instance method, but it’s actually a static method – it always makes the current thread sleep. It’s better practice to make this clear in the calling code:

The static keyword in Java means that the variable or function is shared between all instances of that class as it belongs to the type, not the actual objects themselves.

Static methods can be used without instantiating an object.

It means you don’t have to have an instance of the class to use the method. So in your example, you could call:

From inside a static method (one belonging only to the class) you cannot access any members which are not static, since their values depend on your instantiation of the class. So Clock, which is an instance member, would have a different value/reference for each instance of your Hello class, and therefore you could not access it from the static portion of the class.

That’s how you can have values shared in all class members without sending class instance Hello to other class. And whit static you don’t need to create class instance.

You can just call static values or methods by class name:

This discussion has so far ignored classloader considerations. Strictly speaking, Java static fields are shared between all instances of a class for a given classloader.

Static is a Non Access Modifier.
The static keyword belongs to the class than instance of the class.
can be used to attach a Variable or Method to a Class.

Static keyword CAN be used with:

Class nested within another Class

CAN’T be used with:

Imagine the following example which has an instance variable named count which in incremented in the constructor:

Now if we change the instance variable count to a static one then the program will produce different output:

The global variable which is declared as final and static remains unchanged for the whole execution. Because, Static members are stored in the class memory and they are loaded only once in the whole execution. They are common to all objects of the class. If you declare static variables as final, any of the objects can’t change their value as it is final. Therefore, variables declared as final and static are sometimes referred to as Constants. All fields of interfaces are referred as constants, because they are final and static by default. 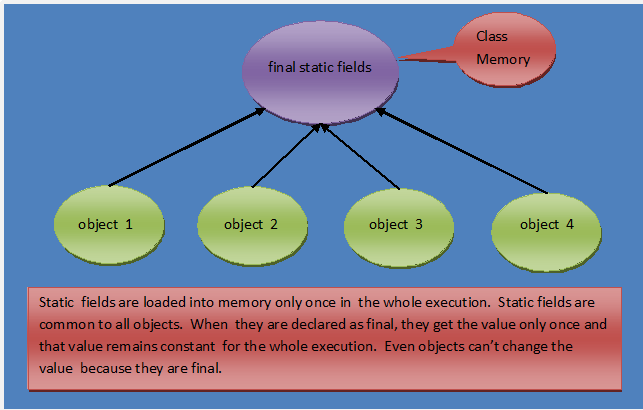 A field can be assigned to either the class or an instance of a class. By default fields are instance variables. By using static the field becomes a class variable, thus there is one and only one clock. If you make a changes in one place, it’s visible everywhere. Instance varables are changed independently of one another.

In Java, the static keyword can be simply regarded as indicating the following:

“without regard or relationship to any particular instance”

If you think of static in this way, it becomes easier to understand its use in the various contexts in which it is encountered:

static methods don’t use any instance variables of the class they are defined in. A very good explanation of the difference can be found on this page

I have developed a liking for static methods (only, if possible) in “helper” classes.

There are probably other advantages.

The keyword static is used to denote a field or a method as belonging to the class itself and not the instance. Using your code, if the object Clock is static, all of the instances of the Hello class will share this Clock data member (field) in common. If you make it non-static, each individual instance of Hello can have a unique Clock field.

The problem is that you added a main method to your class Hello so that you could run the code. The problem here is that the main method is static and as such, it cannot refer to non-static fields or methods inside of it. You can resolve this in two ways:

For you, this means the following change to your code:

Static makes the clock member a class member instead of an instance member. Without the static keyword you would need to create an instance of the Hello class (which has a clock member variable) – e.g.

Can also think of static members not having a “this” pointer. They are shared among all instances.

To add to existing answers, let me try with a picture: 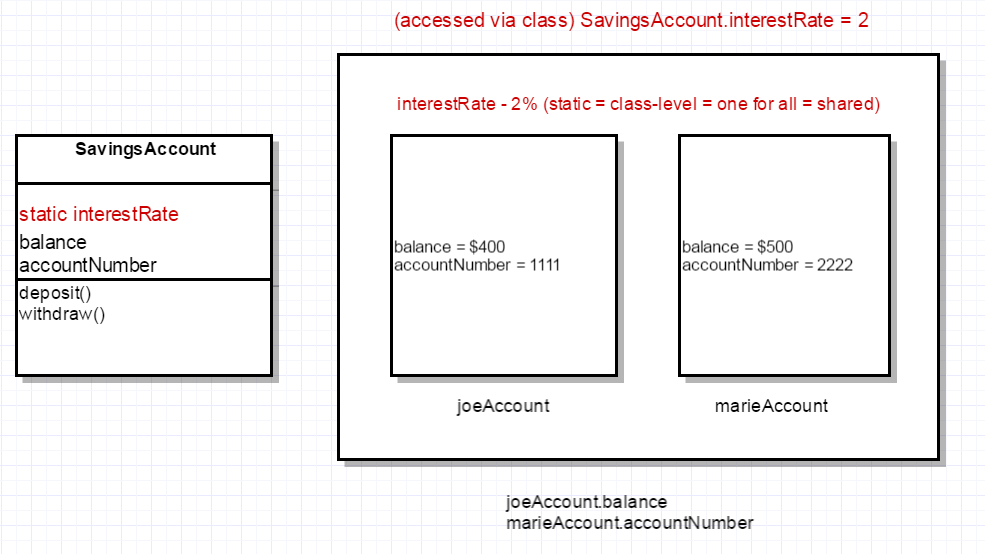 Static Variables Can only be accessed only in static methods, so when we declare the static variables those getter and setter methods will be static methods

The following is example for Static Variables Getters And Setters:

When run this project main method load first. Because its static method. Then it look object "a" object .But object a not define yet. Because its non static. Then come like this error.

Previous article
Convert Set to List without creating new List
Next article
How do the Proxy, Decorator, Adapter, and Bridge Patterns differ?