What exactly is a Maven Snapshot and why do we need it?

I am a bit confused about the meaning of a Maven Snapshot and why we build one?

A snapshot version in Maven is one that has not been released.

The idea is that before a 1.0 release (or any other release) is done, there exists a 1.0-SNAPSHOT. That version is what might become 1.0. It’s basically “1.0 under development”. This might be close to a real 1.0 release, or pretty far (right after the 0.9 release, for example).

The difference between a “real” version and a snapshot version is that snapshots might get updates. That means that downloading 1.0-SNAPSHOT today might give a different file than downloading it yesterday or tomorrow.

Usually, snapshot dependencies should only exist during development and no released version (i.e. no non-snapshot) should have a dependency on a snapshot version.

The three others answers provide you a good vision of what a -SNAPSHOT version is. I just wanted to add some information regarding the behavior of Maven when it finds a SNAPSHOT dependency.

For example, a foo-1.0.jar library is considered as a stable version, and if Maven finds it in the local repository, it will use this one for the current build.

Now, if you need a foo-1.0-SNAPSHOT.jar library, Maven will know that this version is not stable and is subject to changes. That’s why Maven will try to find a newer version in the remote repositories, even if a version of this library is found on the local repository. However, this check is made only once per day. That means that if you have a foo-1.0-20110506.110000-1.jar (i.e. this library has been generated on 2011/05/06 at 11:00:00) in your local repository, and if you run the Maven build again the same day, Maven will not check the repositories for a newer version.

Maven provides you a way to can change this update policy in your repository definition:

(model of the settings.xml can be found here)

The “SNAPSHOT” term means that the build is a snapshot of your code at a given time.

It usually means that the version is a version still under heavy development.

When it comes time to release your code, you will want to change the version listed in the pom. So instead of having a “SNAPSHOT” you would have something like “1.0”.

For some help with versioning, check out the Semantic Versioning specification.

A “release” is the final build for a version which does not change.

A “snapshot” is a build which can be replaced by another build which has the same name. It is implies the build could change at any time and is still under active development.

You have different artifacts for different builds based on the same code. E.g. you might have one with debugging and one without. One for Java 5.0 and one for Java 6. Generally its simpler to have one build which does everything you need. 😉

This is how a snapshot looks like for a repository and in this case is not enabled, which means that the repository referred in here is stable and there’s no need for updates.

Another case would be for:

which means that Maven will look for updates for this repository. You can also specify an interval for the updates with tag.

1)snapshot builds:SNAPSHOT is the special version that indicate current deployment copy not like a regular version, maven checks the version for every build in the remote repository
so the snapshot builds are nothing but maintainance builds.

2)Release builds:Release means removing the SNAPSHOT at the version for the build, these are the regular build versions.

Maven versions can contain a string literal “SNAPSHOT” to signify that a project is currently under active development.

For example, if your project has a version of “1.0-SNAPSHOT” and you deploy this project’s artifacts to a Maven repository,
Maven would expand this version to “1.0-20080207-230803-1” if you were to
deploy a release at 11:08 PM on February 7th, 2008 UTC. In other words, when you
deploy a snapshot, you are not making a release of a software component; you are
releasing a snapshot of a component at a specific time.

So mainly snapshot versions are used for projects under active development.
If your project depends on a software component that is under active development,
you can depend on a snapshot release, and Maven will periodically attempt
to download the latest snapshot from a repository when you run a build. Similarly, if
the next release of your system is going to have a version “1.8,” your project would
have a “1.8-SNAPSHOT” version until it was formally released.

For example , the following dependency would always download the latest 1.8 development JAR of spring:

An example of maven release process 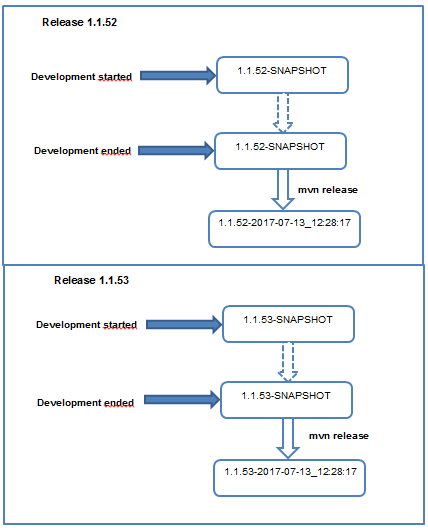 Previous article
How to check if a String is numeric in Java
Next article
How do I convert from int to String?