What is the difference between compile and link function in angularjs

The docs seems a bit obtuse. I am not getting the essence and the big picture of when to use one over the other. An example contrasting the two would be awesome.

Note that DOM transformations can be done in the compile function and/or the link function.

One way to help determine which to use: consider that the compile function does not receive a scope argument. (I’m purposely ignoring the transclude linking function argument, which receives a transcluded scope — this is rarely used.) So the compile function can’t do anything you would want to do that requires an (instance) scope — you can’t $watch any model/instance scope properties, you can’t manipulate the DOM using instance scope information, you can’t call functions defined on the instance scope, etc.

Another way to help determine which to use: if you don’t use the “element” parameter in the link function, then you probably don’t need a link function.

Since most directives have a link function, I’m not going to provide any examples — they should be very easy to find.

I beat my head against the wall on this for a couple of days, and I feel that a bit more explanation is in order.

Basically, the docs mention that the separation is largely a performance enhancement. I would reiterate that the compile phase is mainly used when you need to modify the DOM BEFORE the sub-elements themselves are compiled.

For our purposes, I’m going to stress terminology, which is otherwise confusing:

The compiler SERVICE ($compile) is the angular mechanism that processes the DOM and runs the various bits of code in directives.

The compile FUNCTION is one bit of code within a directive, which is run at a particular time BY the compiler SERVICE ($compile).

Some notes about the compile FUNCTION:

It is also helpful to see how the nesting and explicit calls to $compile work, so I’ve created a playground for viewing that at http://jsbin.com/imUPAMoV/1/edit. Basically, it just logs the steps to console.log.

I’ll state the results of what you’d see in that bin here. For a DOM of custom directives tp and sp nested as follows:

The jsbin code also has the tp post-link FUNCTION explicitly call the compile SERVICE on a third directive (up), which does all three steps at the end.

Now, I want to walk through a couple of scenarios to show how one might go about using the compile and link to do various things:

SCENARIO 1: Directive as a MACRO

You want to add a directive (say ng-show) dynamically to something in your template that you can derive from an attribute.

Say you have a templateUrl that points to:

and you want a custom directive:

that turns the DOM into this:

basically, you want to reduce boilerplate by having some consistent model structure that your directive can interpret. In other words: you want a macro.

This is a great use for the compile phase, since you can base all of the DOM manipulations on things you know just from the attributes. Simply use jQuery to add the attributes:

The sequence of operations will be (you can see this via the jsbin mentioned earlier):

In the above example, no linking is needed, since all of the directive’s work was done in compile FUNCTION.

At any point, the code in a directive can ask for the compiler SERVICE to run on additional elements.

This means that we can do exactly the same thing in a link function if you inject the compile service:

If you’re sure that the elements you are passing to $compile SERVICE originally were directive-free (e.g. they came from a template you defined, or you just created them with angular.element()), then the end result is pretty much the same as before (though you may be repeating some work). However, if the element had other directives on it, you just caused those to be processed again, which can cause all sorts of erratic behavior (e.g. double-registration of events and watches).

Thus, the compile phase is a much better choice for macro-style work.

This one follows from the example above. Suppose you need access to the scope while manipulating the DOM. Well, in that case, the compile section is useless to you, since it happens before a scope is available.

So, let’s say you want to pimp out an input with validations, but you want to export your validations from a server-side ORM class (DRY), and have them auto-apply and generate the proper client-side UI for those validations.

to auto-include the proper directives and divs to show the various validation errors:

In this case you definitely need access to the scope (since that is where your validations are stored), and are going to have to compile the additions manually, again being careful not to double-compile things. (as a side note, you would need to set a name on the containing form tag (I’m assuming theForm here), and could access it in link with iElement.parent().controller(‘form’).$name).

In this case there is no point in writing a compile function. Link is really what you want. The steps would be:

You could, of course, compile the nested elements one-by-one to avoid having to worry about the duplicate processing of ng directives when you compile the top-level element again.

One final note on this scenario: I implied you’d be pushing the definition of the validations from a server, and in my example I’ve shown them as data already in the scope. I leave it as an exercise for the reader to figure out how one might deal with needing to pull that data from a REST API (hint: deferred compile).

Of course the most common use of link is to simply hook up the two-way data binding via watch/apply. Most directives fall into this category, so it is adequately covered elsewhere.

Compiler is an angular service which traverses the DOM looking for attributes. The compilation process happens into two phases.

Some directives such ng-repeat clone DOM elements once for each item in collection. Having a compile and link phase improves performance since the cloned template only needs to be compiled once, and then linked once for each clone instance.

So at least in some cases, the two phases exist separately as an optimization.

If you are going to make DOM transformations, it should be compile. If you want to add some features that are behavior changes, it should be in link.

At the heart Angular framework is a parser. A parser which parses the Angular directives and render’s HTML output. 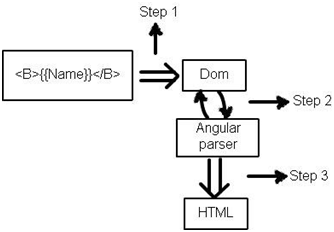 Now the above angular parsing is not so simple as it looks to be. It occurs in two phases “Compile” and “Link”. First the compile phase occurs then the link phase.

In compile phase the angular parser starts parsing the DOM and whenever the parser encounters a directive it create a function. These functions are termed as template or compiled functions. In this phase we do not have access to the $scope data.

In the link phase the data i.e. ($scope) is attached to the template function and executed to get the final HTML output.

This is from Misko ‘s talk on directives. http://youtu.be/WqmeI5fZcho?t=16m23s

Little late to the thread. But, for the benefit of future readers:

I came across the following video which explains Compile and Link in Angular JS in a very great fashion:

It would not be pleasing to copy/type in all of the content here. I took a couple of screenshots from the video, which explain every stage of Compile and Link phases: 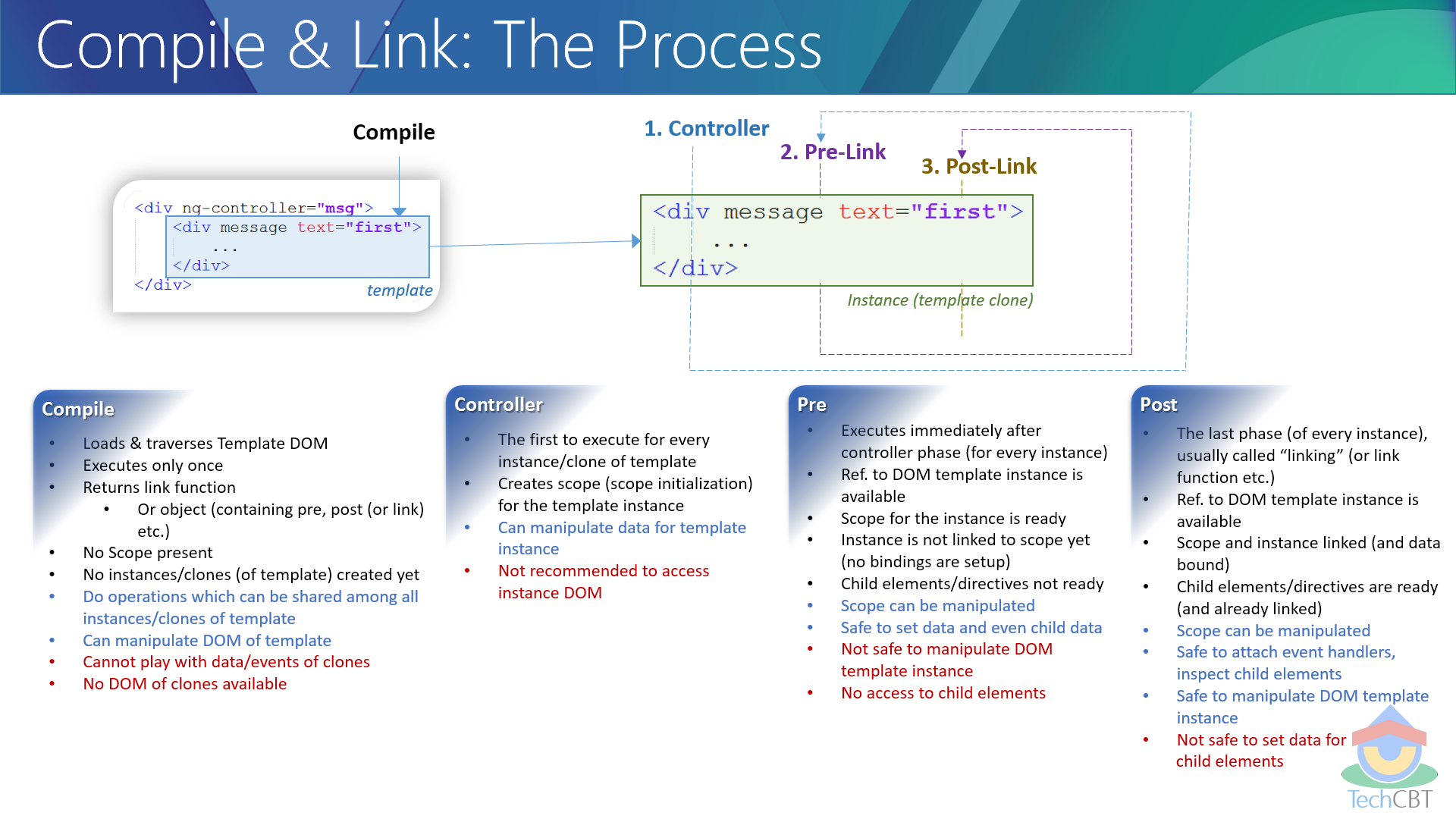 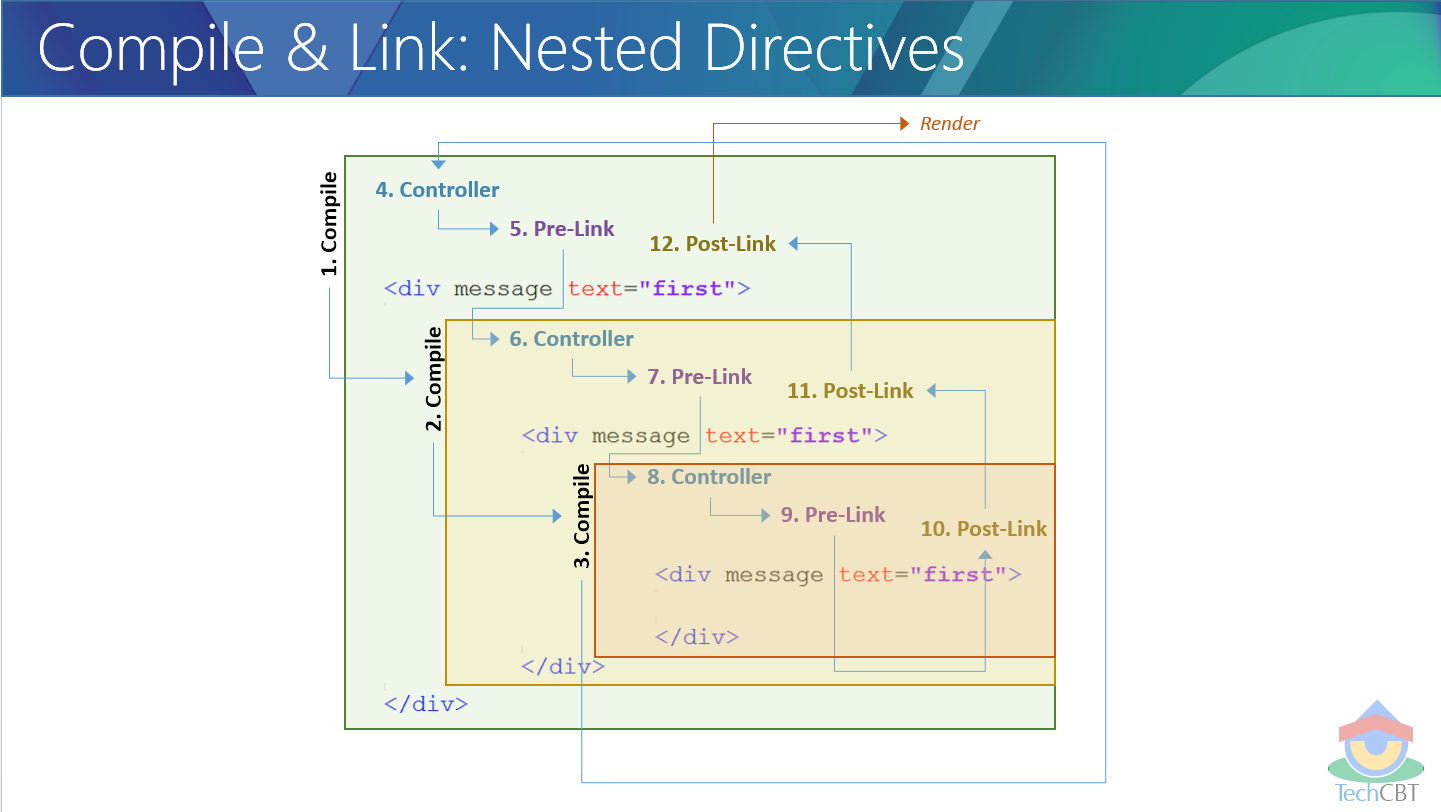 The second screenshot is little bit confusing. But, if we follow the step numbering, it is quite straight forward.

Following is the code, which demonstrates the above:

Part 2 of the same video is available here: https://www.youtube.com/watch?v=1M3LZ1cu7rw The video explains more about how to modify DOM and handle events during Compile and Link process of Angular JS, in a simple example.

Traverse the DOM tree looking for directives (elements / attributes / classes / comments). Each compilation of a directive may modify its template, or modify its contents which has not been compiled yet. Once a directive is matched, it returns a linking function, which is used in a later phase to link elements together. At the end of the compile phase, we have a list of compiled directives and their corresponding linking functions.

When an element is linked, the DOM tree is broken at its branch point in the DOM tree, and the contents are replaced by the compiled (and linked) instance of the template. The original displaced content is either discarded, or in the case of transclusion, re-linked back into the template. With transclusion, the two pieces are linked back together (kind of like a chain, with the template piece being in the middle). When the link function is called, the template has already been bound to a scope, and added as a child of the element. The link function is your opportunity to manipulate the DOM further and setup change listeners.

This question is old by I would like to make short summary which may help: