What is the difference between onPause() and onStop() of Android Activites?

From android doc here http://developer.android.com/reference/android/app/Activity.html,
it said ‘Activity comes into foreground’ will call onPause(), and ‘Activity is no longer visible’ will call onStop().

Isn’t ‘Activity comes into foreground’ same as ‘Activity is no longer visible’?
Can you please tell me what is the difference between them?

No, if some activity comes into foreground, that doesn’t necessarily mean that the other activity is completely invisible. Consider the following case: 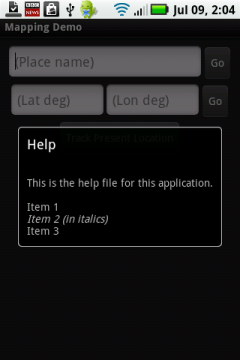 Here we see both activities at the same time. The first activity with the fields is obscured by another activity, and the user can no longer interact with it. However, it is still visible with all the resulting consequences.

That leaves a question which activity is considered fully opaque and covering the whole screen and which isn’t. This decision is based on the window containing the activity. If the window has a flag windowIsFloating or windowIsTranslucent, then it is considered that the activity doesn’t make the underlying stuff invisible, otherwise it does and will cause onStop() to be called. The relevant code can be found in com.android.server.am.ActivityRecord:

A dialog**, for example, may not cover the entire previous Activity, and this would be a time for onPause() to be called.

**I am not referring to an Android Dialog here, rather a conceptual idea of something that pops up and only obscures part of the user screen. This note was added to clarify based on a comment from @GMsoF below

Being in the foreground means that the activity has input focus. For instance, an activity can be visible but partially obscured by a dialog that has focus. In that case, onPause() will be called, but not onStop(). When the dialog goes away, the activity’s onResume() method will be called (but not onStart()).

Practically, one should consider the difference between “onPause()” and “onPause() + onStop()”.

onPause()– Screen is partially covered by other new activity. The Activity is not moved to Back Stack.

onPause() + onStop()– Screen is fully covered by other new activity. The Activity is moved to Back Stack.

Know more about- Back Stack.

onStop() of previous activity life-cycle method is invoked when another activity is shown. When you have Dialogue on the top of activity, there onPause() is invoked.

Note: Activities are those components which fill your entire screen.

Note: Dialogues are not Activity as they don’t completely fill the screen.

I faced many problems with onPause and onStop methods and hence I will clear three scenarios that I came across-
1. When you click on the recent app button, no life cycle method is called but the onWindowFocusChanged(boolean hasFocus) is called with hasFocus value passed as false. In android version before 5 , onPause method used to get called, on pressing the recent app button.

2. When a pop up like activity appear over your activity, as mentioned by Malcolm, the onPause button is called. If new activity that takes up the whole screen is called, then onStop is called on previous activity. Android permission dialog also cause your activity to call onPause.

3. If screen times out on your activity, then onPause is called. After sometime if you will not open the screen then onStop will be called.

whenever a new ACTIVITY starts the previous activity’s onPause will be defiantly called in any circumstances.

actually there will be two circumstances:

1- a part of previous activity is visible or the new activity is transparent: only onPause will be called.

2- previous activity is completely covered by new activity: both onPause and onStop will be called

—-Good to state some notes:

NOTE 1: if a dialog starts on top of an activity NONE of onPause or onStop will be called.

NOTE 2: if its an Activity whose theme is set to a dialog, the behavior will be just like a normal activity.

NOTE 3: apparently a system dialog like permission dialog since marshmallow will cause onPause.

Yeap, I try to understand and I can explain this below:

I hope this is clearly