What is the difference between public, private, and protected?

When and why should I use public, private, and protected functions and variables inside a class? What is the difference between them? 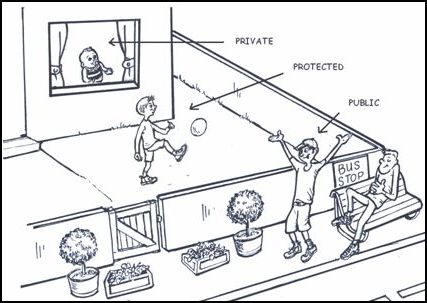 When you declare a method (function) or a property (variable) as public, those methods and properties can be accessed by:

When you declare a method (function) or a property (variable) as protected, those methods and properties can be accessed by

Outsider members cannot access those variables. “Outsiders” in the sense that they are not object instances of the declared class itself.

The exact error will be this:

When you declare a method (function) or a property (variable) as private, those methods and properties can be accessed by:

The exact error messages will be:

This subject is not really out of scope, and I’m adding it here just to prove that reflection is really powerful. As I had stated in the above three examples, protected and private members (properties and methods) cannot be accessed outside of the class.

However, with reflection you can do the extra-ordinary by even accessing protected and private members outside of the class!

Well, what is reflection?

We have a class named Grandpas and say we have three properties. For easy understanding, consider there are three grandpas with names:

Please do not confuse with the below example. As you can still see, the private and protected members cannot be accessed outside of the class without using reflection

print_r, var_export and var_dump are debugger functions. They present information about a variable in a human-readable form. These three functions will reveal the protected and private properties of objects with PHP 5. Static class members will not be shown.

It is typically considered good practice to default to the lowest visibility required as this promotes data encapsulation and good interface design. When considering member variable and method visibility think about the role the member plays in the interaction with other objects.

If you “code to an interface rather than implementation” then it’s usually pretty straightforward to make visibility decisions. In general, variables should be private or protected unless you have a good reason to expose them. Use public accessors (getters/setters) instead to limit and regulate access to a class’s internals.

To use a car as an analogy, things like speed, gear, and direction would be private instance variables. You don’t want the driver to directly manipulate things like air/fuel ratio. Instead, you expose a limited number of actions as public methods. The interface to a car might include methods such as accelerate(), deccelerate()/brake(), setGear(), turnLeft(), turnRight(), etc.

The driver doesn’t know nor should he care how these actions are implemented by the car’s internals, and exposing that functionality could be dangerous to the driver and others on the road. Hence the good practice of designing a public interface and encapsulating the data behind that interface.

This approach also allows you to alter and improve the implementation of the public methods in your class without breaking the interface’s contract with client code. For example, you could improve the accelerate() method to be more fuel efficient, yet the usage of that method would remain the same; client code would require no changes but still reap the benefits of your efficiency improvement.

Edit: Since it seems you are still in the midst of learning object oriented concepts (which are much more difficult to master than any language’s syntax), I highly recommend picking up a copy of PHP Objects, Patterns, and Practice by Matt Zandstra. This is the book that first taught me how to use OOP effectively, rather than just teaching me the syntax. I had learned the syntax years beforehand, but that was useless without understanding the “why” of OOP.

private – can be accessed from WITHIN the class only

protected – can be accessed from WITHIN the class and INHERITING classes

public – can be accessed from code OUTSIDE the class as well

This applies to functions as well as variables.

The difference is as follows:

Public :: A public variable or method can be accessed directly by any user of the class.

Protected :: A protected variable or method cannot be accessed by users of the class but can be accessed inside a subclass that inherits from the class.

This visibility of a property or method is defined by pre-fixing declaration of one of three keyword (Public, protected and private)

Public : If a property or method is defined as public, it means it can be both access and manipulated by anything that can refer to object.

Protected : when a property or method visibility is set to protected members can only be access within the class itself and by inherited & inheriting classes. (Inherited:- a class can have all the properties and methods of another class).

Private : When a property or method visibility is set to private, only the class that has the private members can access those methods and properties(Internally within the class), despite of whatever class relation there maybe.

PHP manual has a good read on the question here.

Considering ‘when’:
I tend to declare everything as private initially, if I’m not exactly sure. Reason being, that it’s usually much easier to turn a private method public than the other way round. That’s because you can at least be sure that the private method hasn’t been used anywhere but in the class itself. A public method may already be in use everywhere, possibly requiring an extensive re-write.

Update: i go for a default of protected nowadays, because I’ve come to find that it’s good enough for encapsulation and doesn’t get in the way when I’m extending classes (which i try to avoid anyway). Only if i have a good reason to use the other two, i will.

A good reason for a private method would be one that implements something inherent to that object that even an extending class should not change (factual reason, in addition to encapsulation). Eventually, it’s still easy enough to track down where a protected method is being used usually, so i default to protected nowadays. Maybe not 100% objective “in the trenches” experience, I admit.

They’re there to allow for different levels of encapsulation

Variables in PHP are cast in three different type:

Public : values of this variable types are available in all scope and call on execution of you code.
declare as: public $examTimeTable;

Private: Values of this type of variable are only available on only to the class it belongs to.
private $classRoomComputers;

Protected: Values of this class only and only available when Access been granted in a form of inheritance or their child class. generally used :: to grant access by parent class

For me, this is the most useful way to understand the three property types:

Public: Use this when you are OK with this variable being directly accessed and changed from anywhere in your code.

Example usage from outside of the class:

Protected: Use this when you want to force other programmers (and yourself) to use getters/setters outside of the class when accessing and setting variables (but you should be consistent and use the getters and setters inside the class as well). This or private tend to be the default way you should set up all class properties.

Why? Because if you decide at some point in the future (maybe even in like 5 minutes) that you want to manipulate the value that is returned for that property or do something with it before getting/setting, you can do that without refactoring everywhere you have used it in your project.

Example usage from outside of the class:

Private: private properties are very similar to protected properties. But the distinguishing feature/difference is that making it private also makes it inaccessible to child classes without using the parent class’s getter or setter.

So basically, if you are using getters and setters for a property (or if it is used only internally by the parent class and it isn’t meant to be accessible anywhere else) you might as well make it private, just to prevent anyone from trying to use it directly and introducing bugs.

Example usage inside a child class (that extends MyObject):

Here is an easy way to remember the scope of public, protected and private.

Read the Visibility of a method or variable on PHP Manual.

Reviving an old question, but I think a really good way to think of this is in terms of the API that you are defining.

So in terms of maintaining code, its good to be careful about what things you make public or protected because these are the things you are promising to your users.

Public: is a default state when you declare a variable or method, can be accessed by anything directly to the object.

Protected: Can be accessed only within the object and subclasses.

Private: Can be referenced only within the object, not subclasses.

Previous article
How does PHP 'foreach' actually work?
Next article
Get the full URL in PHP