What is the difference between the HashMap and Map objects in Java?

What is the difference between the following maps I create (in another question, people answered using them seemingly interchangeably and I’m wondering if/how they are different):

The class has a couple of internal maps of string->object which it shares (via accessor methods) with subclasses. Let’s say I write it with HashMaps to start with because I think that’s the appropriate structure to use when writing the class.

Later, Mary writes code subclassing it. She has something she needs to do with both things and moreThings, so naturally she puts that in a common method, and she uses the same type I used on getThings/getMoreThings when defining her method:

Later, I decide that actually, it’s better if I use TreeMap instead of HashMap in Foo. I update Foo, changing HashMap to TreeMap. Now, SpecialFoo doesn’t compile anymore, because I’ve broken the contract: Foo used to say it provided HashMaps, but now it’s providing TreeMaps instead. So we have to fix SpecialFoo now (and this kind of thing can ripple through a codebase).

Unless I had a really good reason for sharing that my implementation was using a HashMap (and that does happen), what I should have done was declare getThings and getMoreThings as just returning Map<String, Object> without being any more specific than that. In fact, barring a good reason to do something else, even within Foo I should probably declare things and moreThings as Map, not HashMap/TreeMap:

Note how I’m now using Map<String, Object> everywhere I can, only being specific when I create the actual objects.

If I had done that, then Mary would have done this:

…and changing Foo wouldn’t have made SpecialFoo stop compiling.

Interfaces (and base classes) let us reveal only as much as is necessary, keeping our flexibility under the covers to make changes as appropriate. In general, we want to have our references be as basic as possible. If we don’t need to know it’s a HashMap, just call it a Map.

This isn’t a blind rule, but in general, coding to the most general interface is going to be less brittle than coding to something more specific. If I’d remembered that, I wouldn’t have created a Foo that set Mary up for failure with SpecialFoo. If Mary had remembered that, then even though I messed up Foo, she would have declared her private method with Map instead of HashMap and my changing Foo‘s contract wouldn’t have impacted her code.

Sometimes you can’t do that, sometimes you have to be specific. But unless you have a reason to be, err toward the least-specific interface.

ah, so the difference is that in
general, Map has certain methods
associated with it. but there are
different ways or creating a map, such
as a HashMap, and these different ways
provide unique methods that not all
maps have.

Exactly–and you always want to use the most general interface you possibly can. Consider ArrayList vs LinkedList. Huge difference in how you use them, but if you use “List” you can switch between them readily.

In fact, you can replace the right-hand side of the initializer with a more dynamic statement. how about something like this:

This way if you are going to fill in the collection with an insertion sort, you would use a linked list (an insertion sort into an array list is criminal.) But if you don’t need to keep it sorted and are just appending, you use an ArrayList (More efficient for other operations).

This is a pretty big stretch here because collections aren’t the best example, but in OO design one of the most important concepts is using the interface facade to access different objects with the exact same code.

As for your map comment below, Yes using the “Map” interface restricts you to only those methods unless you cast the collection back from Map to HashMap (which COMPLETELY defeats the purpose).

Often what you will do is create an object and fill it in using it’s specific type (HashMap), in some kind of “create” or “initialize” method, but that method will return a “Map” that doesn’t need to be manipulated as a HashMap any more.

If you ever have to cast by the way, you are probably using the wrong interface or your code isn’t structured well enough. Note that it is acceptable to have one section of your code treat it as a “HashMap” while the other treats it as a “Map”, but this should flow “down”. so that you are never casting. 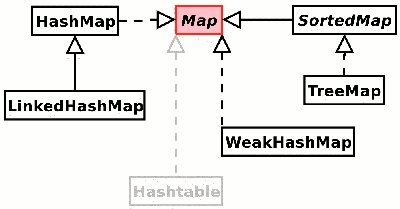 Suppose you have created one method (It’s just spudo code).

Suppose you project requirement are changing each time as follows,

If your method returning Specific classes instead of Map interface you have to change return type of getMap() method each time.

But, If you use polymorphism feature of java, Instead of returning specific class used interface Map, It leads code reusability and less impact if any requirement change.

As noted by TJ Crowder and Adamski, one reference is to an interface, the other to a specific implementation of the interface. According to Joshua Block, you should always attempt to code to interfaces, to allow you to better handle changes to underlying implementation – i.e. if HashMap suddenly was not ideal for your solution and you needed to change the map implementation, you could still use the Map interface, and change the instantiation type.

In your second example the “map” reference is of type Map, which is an interface implemented by HashMap (and other types of Map). This interface is a contract saying that the object maps keys to values and supports various operations (e.g. put, get). It says nothing about the implementation of the Map (in this case a HashMap).

The second approach is generally preferred as you typically wouldn’t want to expose the specific map implementation to methods using the Map or via an API definition.

Map is the static type of map, while HashMap is the dynamic type of map. This means that the compiler will treat your map object as being one of type Map, even though at runtime, it may point to any subtype of it.

This practice of programming against interfaces instead of implementations has the added benefit of remaining flexible: You can for instance replace the dynamic type of map at runtime, as long as it is a subtype of Map (e.g. LinkedHashMap), and change the map’s behavior on the fly.

A good rule of thumb is to remain as abstract as possible on the API level: If for instance a method you are programming must work on maps, then it’s sufficient to declare a parameter as Map instead of the stricter (because less abstract) HashMap type. That way, the consumer of your API can be flexible about what kind of Map implementation they want to pass to your method.

You create the same maps.

But you can fill the difference when you will use it. With first case you’ll be able to use special HashMap methods (but I don’t remember anyone realy useful), and you’ll be able to pass it as a HashMap parameter:

Map is the Interface and Hashmap is the class that implements that.

So in this implementation you create the same objects

First of all Map is an interface it has different implementation like – HashMap, TreeHashMap, LinkedHashMap etc. Interface works like a super class for the implementing class. So according to OOP’s rule any concrete class that implements Map is a Map also. That means we can assign/put any HashMap type variable to a Map type variable without any type of casting.

Adding to the top voted answer and many ones above stressing the “more generic, better”, I would like to dig a little bit more.

Map is the structure contract while HashMap is an implementation providing its own methods to deal with different real problems: how to calculate index, what is the capacity and how to increment it, how to insert, how to keep the index unique, etc.

Let’s look into the source code:

In Map we have the method of containsKey(Object key):

Returns true if this map maps one or more keys to the specified value. More formally, returns true if and only if this map contains at least one mapping to a value v such that (value==null ? v==null : value.equals(v)). This operation will probably require time linear in the map size for most implementations of the Map interface.

value whose presence in this map is to betested

if this map maps one or more keys to the specified

It requires its implementations to implement it, but the “how to” is at its freedom, only to ensure it returns correct.

It turns out that HashMap uses hashcode to test if this map contains the key. So it has the benefit of hash algorithm.

Previous article
How to find unused/dead code in java projects
Next article
Remove last character of a StringBuilder?