What's the difference between map and flatMap methods in Java 8?

In Java 8, what’s the difference between Stream.map and Stream.flatMap methods?

This is reflected in the arguments to each operation.

The map operation takes a Function, which is called for each value in the input stream and produces one result value, which is sent to the output stream.

Typical use is for the mapper function of flatMap to return Stream.empty() if it wants to send zero values, or something like Stream.of(a, b, c) if it wants to return several values. But of course any stream can be returned.

Stream.flatMap, as it can be guessed by its name, is the combination of a map and a flat operation. That means that you first apply a function to your elements, and then flatten it. Stream.map only applies a function to the stream without flattening the stream.

I would like to give 2 examples to get a more practical point of view:

Nothing Special into the 1st example, a Function is applied to return the String in uppercase.

If a tranformation Function has to be used (through map), then first the Stream has to be flattened to something else (a Stream of Integer).

If flatMap is removed then the following error is returned: The operator + is undefined for the argument type(s) List, int.

It is NOT possible to apply + 1 on a List of Integers!

Here the issue is , Lambda passed to the map method returns a String array for each word, So the stream returned by the map method is actually of type Stream, But what we need is Stream to represent a stream of characters, below image illustrates the problem. 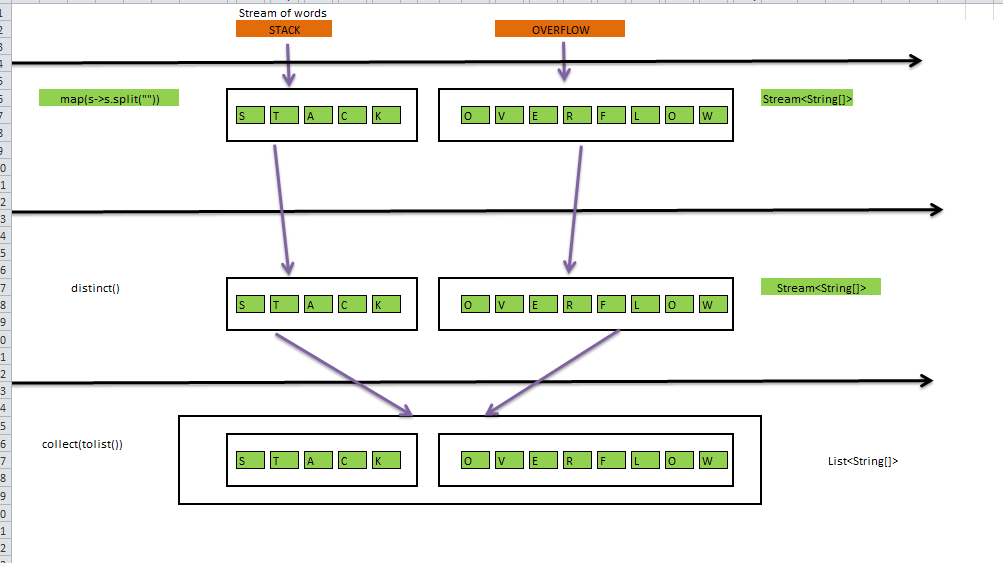 You might think that, We can resolve this problem using flatmap,
OK, let us see how to solve this by using map and Arrays.stream
First of all you gonna need a stream of characters instead of a stream of arrays. There is a method called Arrays.stream() that would take an array and produces a stream, for example:

The above still does not work, because we now end up with a list of streams (more precisely, Stream>), Instead, we must first convert each word in to an array of individual letters and then make each array into a separate stream

By using flatMap we should be able to fix this problem as below:

flatMap would perform mapping each array not with stream but with the contents of that stream.All of the individual streams that would get generated while using map(Arrays::stream) get merged in to a single stream. Figure B illustrates the effect of using the flatMap method. Compare it with what map does in figure A.
Figure B 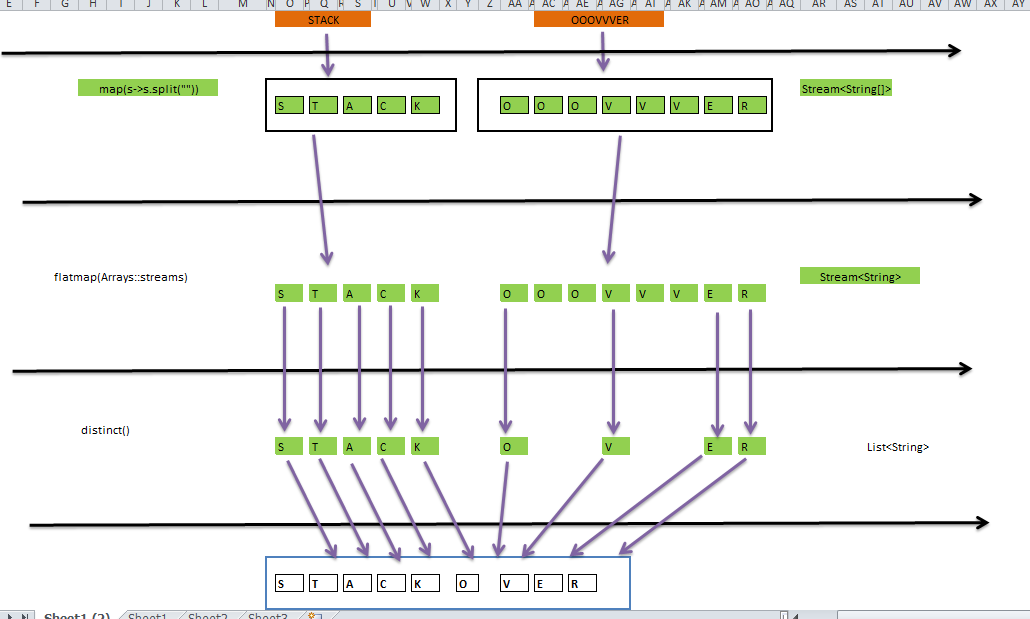 The flatMap method lets you replace each value of a stream with another stream and then joins all the generated streams into a single stream.

The function you pass to stream.flatMap returns a stream for each object. That means the function can return any number of objects for each input object (including none). The resulting streams are then concatenated to one output stream.

Oracle’s article on Optional highlights this difference between map and flatmap:

Unfortunately, this code doesn’t compile. Why? The variable computer
is of type Optional<Computer>, so it is perfectly correct to call the
map method. However, getSoundcard() returns an object of type
Optional. This means the result of the map operation is an
object of type Optional<Optional<Soundcard>>. As a result, the call to
getUSB() is invalid because the outermost Optional contains as its
value another Optional, which of course doesn’t support the getUSB()
method.

With streams, the flatMap method takes a function as an argument,
which returns another stream. This function is applied to each element
of a stream, which would result in a stream of streams. However,
flatMap has the effect of replacing each generated stream by the
contents of that stream. In other words, all the separate streams that
are generated by the function get amalgamated or “flattened” into one
single stream. What we want here is something similar, but we want to
“flatten” a two-level Optional into one.

Optional also supports a flatMap method. Its purpose is to apply
the transformation function on the value of an Optional (just like the map
operation does) and then flatten the resulting two-level Optional into
a single one.

So, to make our code correct, we need to rewrite it as follows using
flatMap:

Map :-
This method takes one Function as an argument and returns a new stream consisting of the results generated by applying the passed function to all the elements of the stream.

As you can see, output is a new stream whose values are square of values of input stream.

FlatMap :-
This method takes one Function as an argument, this function accepts one parameter T as an input argument and return one stream of parameter R as a return value. When this function is applied on each element of this stream, it produces a stream of new values. All the elements of these new streams generated by each element are then copied to a new stream, which will be a return value of this method.

Let’s image, I have a list of student objects, where each student can opt for multiple subjects.

As you can see, output is a new stream whose values are collection of all the elements of the streams return by each element of input stream.

I have a feeling that all answers here overengineer the problem. If you already understand how the map works that should be fairly simple to grasp.

The flatmap() method is a special kind of map() which allows to flatten nested structures or avoid ending up with them.

We can avoid having nested lists by using flatmap:

Also good analogy can be with C# if you familiar with. Basically C# Select similar to java map and C# SelectMany java flatMap. Same applies to Kotlin for collections.

for a Map we have a list of elements and a (function,action) f so :

and for the flat map we have a list of elements list and we have a (function,action) f and we want the result to be flattened :

This is very confusing for beginners. The basic difference is map emits one item for each entry in the list and flatMap is basically a map + flatten operation. To be more clear, use flatMap when you require more than one value, eg when you are expecting a loop to return arrays, flatMap will be really helpful in this case.

I have written a blog about this, you can check it out here.

Previous article
Polymorphism vs Overriding vs Overloading
Next article
Why can I throw null in Java?