Why Android Studio says "Waiting For Debugger" if am NOT debugging?

I am working with Android Studio. Since last night, when I Run my project on my device, appear the message “Waiting For Debugger”. It is a very strange behavior because I am not debugging application.

I’ve tried to uninstall application from my device and press Run on Android Studio. The message appears again.

The only way to properly install application on my phone is to press “Debug”. The message appears but its automatically closed. Then application works fine.

… and still the message appears.

Regards on first error line, someone says that the problems can starts after renaming of some resource. But its not my case.

Regards on second error line, … I don’t know. I really don’t know what happens to my IDE.

I’ve ran into this issue in the past and again today. In my case the problem is resolved by a device reboot. After a clean boot I can again run the application and the “Waiting for Debugger” prompt does not appear.

You can fix this issue without re-booting your device. Just go to “Android device”->”Settings”->”Developer Options”->“Select app to be debugged”. It will likely be pointing to your application. Just select the option and then select “None”.

Note: As mentioned, even if “None” is already selected, re-selecting “None” appears to correct the problem.

Just to be clear: This is on the device, not in Android Studio (cf. very helpful comment from Regis_AG).

faster than rebooting is Just go to developer options and switch it off and on again (dont forget to check usb debugging option too), worked for me(Neuxs5).

After 8 hours on this problem I feel obliged to share the cause. My /etc/hosts was bad.

I have the same problem. In my case I have two development environments open in the same time: Android Studio and Eclipse. After I close Eclipse and run the debug process again works well. Hope this help!

You may want to check your debugging setting in Dev Setting on your AVD. Take a look at the following picture: 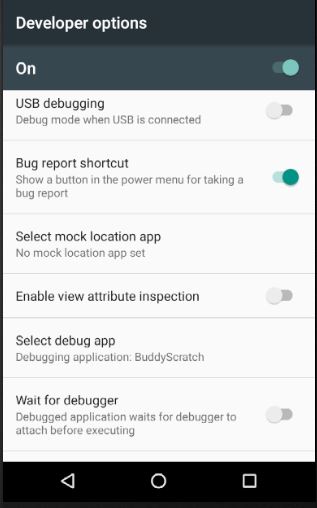 I uninstalled the app with which this issue was occurring.

Then I installed the app with debug mode.

It solved the problem. Now it is working fine.

I had this problem; In Android Studio I accidentally hit Run > ‘Debug App’ instead of Run> Run ‘App’ . I solved the problem. In my case I had to get the application to launch successfully in DEBUG mode. Here were my steps-

1) The android device needs to be able to connect to the development PC on port 8600. This connection was being disallowed by my firewall configuration. I turned off the firewall. Once confirmed I created a firewall rule to allow connectivity between the devices on port 8600.

2) To validate that the port is available, you can go into Android Studio,
Run > Attach debugger to Android Process. This will cause the android device application launched in DEBUG mode to connect to your Android Studio development PC.

3) Once the app has launched once, you can go back and Run > Run ‘App’ and you will no longer get the annoying screen ‘WAITING for DEBUGGER’.

4) And you can also Run> Debug ‘App’. The device will say “Waiting for Debugger” for a moment and then Android Studio will start up a Debugger Console and help you debug your android device app remotely!

My PC was running low on memory and this problem appeared quite often. Fix was to free up more memory by deleting old files/apps. I notice that running emulators like Android TV tend to need a lot of memory for them to run predictably

I have already solve this problem by reboot my device. It is a device issue not android studio issue.

Click on AVD Manager. From device actions option select “Cold Boot Now”
Doing a cold boot in the emulator worked for me.