Why do I get an error when starting a purchase flow on IAP library?

The API is very different, but of course presents about the same functionality.

I have an app with just 2 SKUs (available in-app purchases in my case). One stays forever, and another gets consumed right after a purchase.

I’m trying to migrate to the new API. Everything seem ok. The purchases can get received from previous API, and I can get the details of all SKUs (available purchases ) :

However, when I use an SKU (that works fine when I query detail about it) for starting a purchase:

I get this dialog, saying “The item you requested is not available for purchase”. 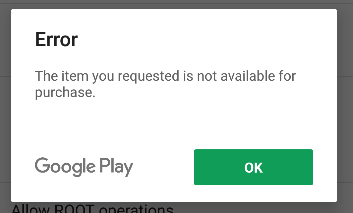 I thought it was an issue with the code I made, because I tried various tests on the same device, so I tried only to purchase flow on another device, but I got the same issue.

Of course, I tried to find a function or parameters that I might have missed, but both the docs and the sample show it should be just fine to use the above code.

I also tried to contact Google inside the Github repo of their sample (here), but so far I didn’t get a reply. No idea where’s the best place to ask them about it.

Why do I get this issue? Am I supposed to use something else in case the SKUs were set a long time ago?

Will I have an issue with consuming (didn’t test yet, because first I need to perform a purchase) ?

I forgot I had this issue in the past.

It’s because of multiple reasons: