Why is ;; allowed after a local variable declaration, but not after a field declaration?

I saw this weird behaviour and I wonder if there’s a reasonable explanation for this:

When I put by ( by accident) an additional/extra semicolon in a function’s local variable like:

It does compile but it shows that it’s redundant.

But when I did that with fields (also by accident) , I got an error (compilation) : 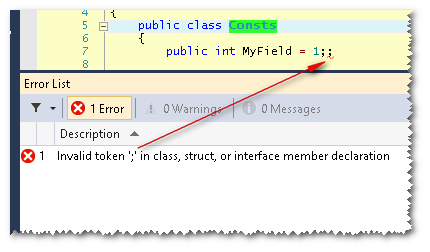 Is there any reason for this restrictiveness in fields ?

Nb I already know the other restrictiveness thing for not allowing var with fields. But here it’s something different.

; itself is an empty statement. And in class scope only the declaration statements are allowed.The class body is defined in C# Specification 5.0, §10.1.6 Class Body

For example you can’t initialize a field in a separate statement:

So you can only declare fields and other members but you can’t use other statements in a class body.

It is not part of local variable declaration, it’s a statement by itself, as indicated by Thomas.

The idea of semi-colon statement is to allow such constructs:

It does not make sense to allow it in in the body of class, it brings no extra value.

TLDR; this has nothing to do with variable/field declaration

You might want to take a look at this thread too: When do you use scope without a statement in C#?

It is kind of similiar, but not completely, it will help you to understand why

In the first case the compiler sees a no-op statement. It doesn’t matter that the second ; comes after a variable declaration.

In the second case the compiler sees an attempt to create an empty declaration which isn’t allowed.

Inside the body of a function the redundant ; is an empty statement but in the class declaration is an undeclared field and it not allowed.