I have observed on a system that std::fill on a large std::vector<int> was significantly and consistently slower when setting a constant value 0 compared to a constant value 1 or a dynamic value:

However, the results are different for smaller data sizes, where fill(0) is faster: 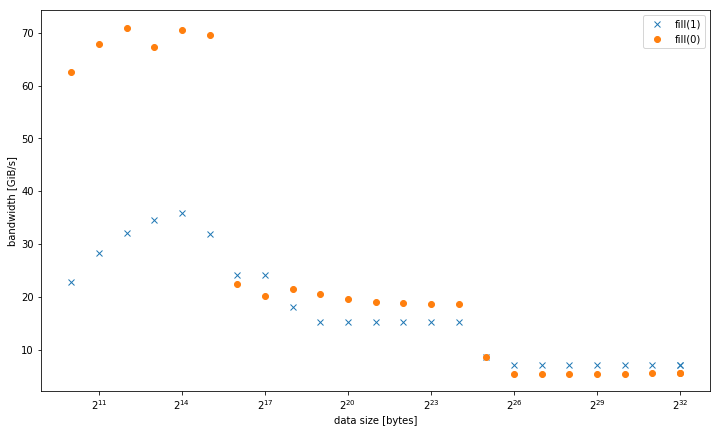 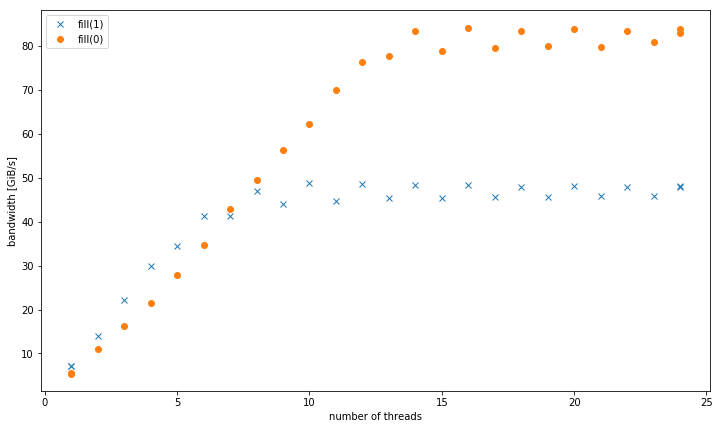 This raises the secondary question, why the peak bandwidth of fill(1) is so much lower.

I was able to reproduce this effect on a different Haswell dual socket server system, but not any other architecture. For example on Sandy Bridge EP, memory performance is identical, while in cache fill(0) is much faster.

Here is the code to reproduce:

From your question + the compiler-generated asm from your answer:

Note that rep movsd (which could be used to implement fill(1) for int elements) will probably perform the same as rep stosb on Haswell.
Although only the official documentation only guarantees that ERMSB gives fast rep stosb (but not rep stosd), actual CPUs that support ERMSB use similarly efficient microcode for rep stosd. There is some doubt about IvyBridge, where maybe only b is fast. See the @BeeOnRope’s excellent ERMSB answer for updates on this.

gcc has some x86 tuning options for string ops (like -mstringop-strategy=alg and -mmemset-strategy=strategy), but IDK if any of them will get it to actually emit rep movsd for fill(1). Probably not, since I assume the code starts out as a loop, rather than a memset.

A normal movaps store to a cold cache line triggers a Read For Ownership (RFO). A lot of real DRAM bandwidth is spent on reading cache lines from memory when movaps writes the first 16 bytes. ERMSB stores use a no-RFO protocol for its stores, so the memory controllers are only writing. (Except for miscellaneous reads, like page tables if any page-walks miss even in L3 cache, and maybe some load misses in interrupt handlers or whatever).

@BeeOnRope explains in comments that the difference between regular RFO stores and the RFO-avoiding protocol used by ERMSB has downsides for some ranges of buffer sizes on server CPUs where there’s high latency in the uncore/L3 cache. See also the linked ERMSB answer for more about RFO vs non-RFO, and the high latency of the uncore (L3/memory) in many-core Intel CPUs being a problem for single-core bandwidth.

movntps (_mm_stream_ps()) stores are weakly-ordered, so they can bypass the cache and go straight to memory a whole cache-line at a time without ever reading the cache line into L1D. movntps avoids RFOs, like rep stos does. (rep stos stores can reorder with each other, but not outside the boundaries of the instruction.)

Your movntps results in your updated answer are surprising.
For a single thread with large buffers, your results are movnt >> regular RFO > ERMSB. So that’s really weird that the two non-RFO methods are on opposite sides of the plain old stores, and that ERMSB is so far from optimal. I don’t currently have an explanation for that. (edits welcome with an explanation + good evidence).

As we expected, movnt allows multiple threads to achieve high aggregate store bandwidth, like ERMSB. movnt always goes straight into line-fill buffers and then memory, so it is much slower for buffer sizes that fit in cache. One 128b vector per clock is enough to easily saturate a single core’s no-RFO bandwidth to DRAM. Probably vmovntps ymm (256b) is only a measurable advantage over vmovntps xmm (128b) when storing the results of a CPU-bound AVX 256b-vectorized computation (i.e. only when it saves the trouble of unpacking to 128b).

movnti bandwidth is low because storing in 4B chunks bottlenecks on 1 store uop per clock adding data to the line fill buffers, not on sending those line-full buffers to DRAM (until you have enough threads to saturate memory bandwidth).

See also other stuff in the x86 tag wiki.

I’ll share my preliminary findings, in the hope to encourage more detailed answers. I just felt this would be too much as part of the question itself.

The compiler optimizes fill(0) to a internal memset. It cannot do the same for fill(1), since memset only works on bytes.

Wheres the manual loop compiles down to an actual 128-bit instruction:

Interestingly while there is a template/header optimization to implement std::fill via memset for byte types, but in this case it is a compiler optimization to transform the actual loop.
Strangely,for a std::vector<char>, gcc begins to optimize also fill(1). The Intel compiler does not, despite the memset template specification.

Since this happens only when the code is actually working in memory rather than cache, makes it appears the Haswell-EP architecture fails to efficiently consolidate the single byte writes.

I would appreciate any further insight into the issue and the related micro-architecture details. In particular it is unclear to me why this behaves so differently for four or more threads and why memset is so much faster in cache.

Here is a result in comparison with

For <= 6 thread, vmovnt has a 2x advantage over rep stos when operating in memory. 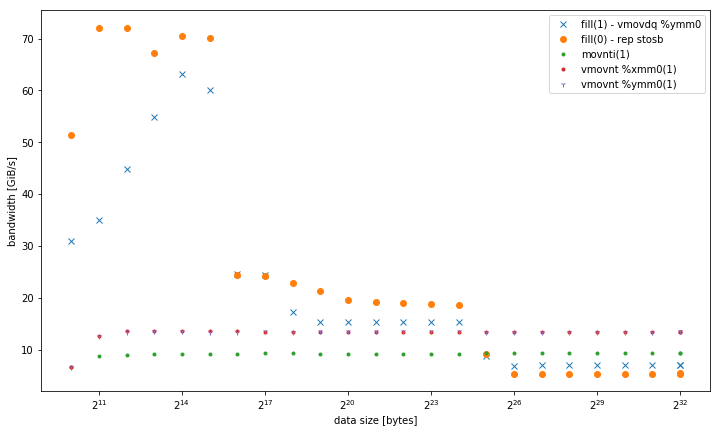 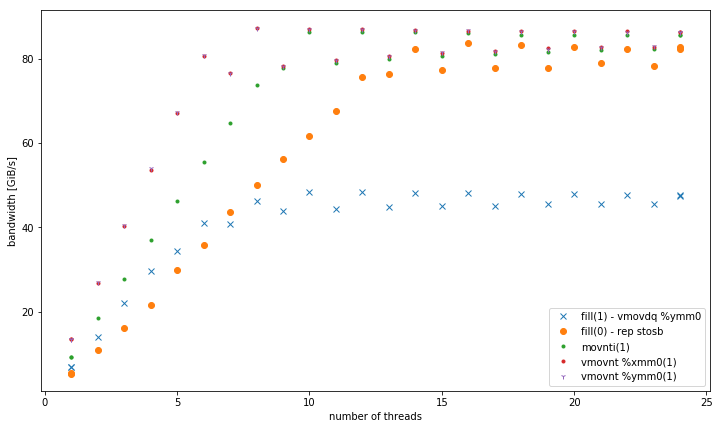 Here is the code used for the additional tests with their respective hot-loops:

Note: I had to do manual pointer calculation in order to get the loops so compact. Otherwise it would do vector indexing within the loop, probably due to the intrinsic confusing the optimizer.

emplace_back() does not behave as expected

Questions: I wrote a simple program to play around with in-place creation of objects inside standard library containers. This is what I wrote: #include <vector> #include <iostream> class A...

Does in class member initialization takes place at compile time or run-time?

Why are move semantics for a class containing a std::stringstream causing compiler errors?