While I was playing on my phone, I noticed that my UISegmentedControl was not very responsive. It would take 2 or more tries to make my taps register. So I decided to run my app in Simulator to more precisely probe what was wrong. By clicking dozens of times with my mouse, I determined that the top 25% of the UISegmentedControl does not respond (the portion is highlighted in red with Photoshop in the screenshot below). I am not aware of any invisible UIView that could be blocking it. Do you know how to make the entire control tappable? 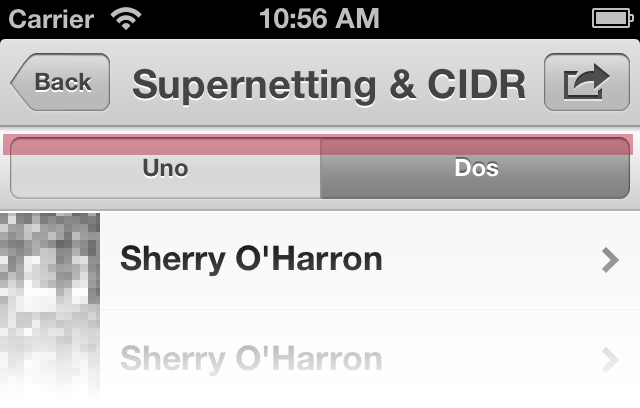 As already written in other answers, UINavigationBar grabs the touches made near the nav bar itself, but not because it has some subviews extended over the edges: this is not the reason.

If you log the whole view hierarchy, you will see that the UINavigationBar doesn’t extends over the defined edges.

The reason why it receives the touches is another:

in UIKit, there are many “special cases”, and this is one of them.

When you tap the screen, a process called “hit testing” starts. Starting from the first UIWindow, all views are asked to answer two “questions”: is the point tapped inside your bounds? what is the subviews that must receive the touch event?

this questions are answered by these two methods:

Ok, now we can continue.

After the tap, UIApplicationMain starts the hit testing process. The hit test starts from the main UIWindow (and is executed even on the status bar window and the alert view window, for example), and goes through all subviews.

This process is executed 3 times:

If you tap on the Navigation Bar, you will see that hitTest on UIWindow will return the UINavigationBar (all three times)

If you tap on the area below the Navigation Bar however, you will se something strange:

why this?
If you swizzle and subclass UIView, overriding hitTest, you will see that the first two times the tapped point is correct. The third time, something changes the point doing something like point - 15 (or a similar number)

After a lot of searching, I have found where this is happening:

UIWindow has a (private) method called

debugging it, I saw that this method changes the tapped point if it is immediately below the status bar.
Debugging more, I saw that the stack calls that make this possible, are only 3:

So, at the end, this warpPoint method checks if the UINavigationBar is enabled and hittable, if yes it “warps” the point. The point is warped of a number of pixel between 0 and 15, and this “warp” increases when you get closer to the Navigation Bar.

Now that you know what happens behind the scenes, you have to know how to avoid it (if you want).

You can’t simply override warpPoint: if the application must go on the AppStore: it’s a private method and your app will be rejected.

You have to find another system (like as suggested, overriding sendEvent, but I’m not sure if it will work)

Because this question is interesting, I will think about a legal solution tomorrow and update this answer (one good starting point can be subclassing UINavigationBar, overriding hitTest and pointInside, returning nil/false if, given the same event over multiple calls, the point changes. But I must test if it works tomorrow)

Ok, I’ve tried many solutions but it’s not simple to find a legal and stable one.
I’ve described the actual behavior of the system, that could vary on different versions (hitTest called more or less than 3 times, the warpPoint warping the point of about 15px that can change ecc ecc).

The most stable is obviously the illegal override of warpPoint: in a UIWindow subclass:

however, I’ve found that a method like this (in UIWindow subclass) it’s stable enough and does the trick:

This method records the last point tapped, and if the subsequent tap is at the same x, and an y different for max 16px, then uses the previous point.
I’ve tested a lot and it seems stable.
If you want, you can add more controls to enable this behavior only in particular controllers, or only on a defined portion of the window, ecc ecc.
If I find another solution, I’ll update the post

I believe the problem is because the buttons in the UINavigationBar have a larger than normal touch area. See this SO post. You can also find plenty of discussion on this with a ‘UINavigationBar touch area’ Google search.

As a possible solution, you could put the segmented control IN the navigation bar, but you would know better than I if that fits your use cases or not.

I’ve come up with an alternate solution that to me seems safer than LombaX’s. It uses the fact that both events come in with the same timestamp to reject the subsequent event.

You might want to check which view is recording the touches. Try this method-

Once you figure that out you maybe able to narrow down your problem.

It looks as if you’re using a category extension to set width/height on views, as well as center them in their parent. Perhaps there is a hidden issue here – can you refactor to do your layout w/out this category?

I copied your code into a clean project and ran it in a UITableViewController’s viewDidLoad method – it works fine and I have no dead spots like you report. I had to change your code slightly since I don’t have the same category extension that you’re using.

Also, if you’re running this code in viewDidLoad, you should verify that your view has a defined size (you access your view.width). If you’re creating your UITableViewController programmatically (vs from a nib/storyboard) then the frame may be CGRectZero. Mine was loaded from a nib so the frame was preset.

I recommend that you avoid having touch-sensitive UI in such close proximity to the nav bar or toolbar. These areas are typically known as “slop factors” making it easier for users to perform touch events on buttons without the difficulty of performing precision touches. This is also the case for UIButtons for example.

But if you want to capture the touch event before the navigation bar or toolbar receives it, you can subclass UIWindow and override: -(void)sendEvent:(UIEvent *)event;

An easy way to debug this is to try using DCIntrospect in your project. It’s a very easy to use/implement library that makes finding out what views are where when in the simulator a breeze.

If what’s highlighted isn’t the segmented view controller, that view could be what’s covering up the touch event.

Create a protocol for UINavigationBar: (add new file and paste below code)

What is the preprocessor macro to test whether an application extension is being built?

Previous article
What exactly spine is in UIPageViewController?
Next article
AntiForgery.GetTokens: what is the purpose of the oldCookieToken parameter?